Maybe you remember the public debate I aired with Gartner analyst Jennifer Beck, which was instigated by a pronouncement that I used to bandy about to occasional jeers and eye rolls:

Well, it turns out that reports of the campaign’s demise were perhaps just a bit overstated. In my defense, I never meant dead, dead. I meant dying. No, not dying. Changing.

OK, so I was still wrestling with the right set of words to describe the sea change we were witnessing on the front lines. That sea change is what we’ve come to describe as two-speed marketing: 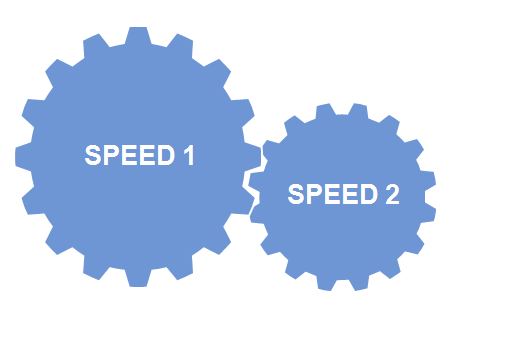 Like interlocked gears of different sizes, speed one spins lockstep with the cadence of the flywheel. Speed two (which, as you can see, is smaller) spins much, much faster.

If you’re like most marketers, you’re probably executing at both speeds on some level. But the question you should ask is whether your energy is diffused or amplified.

Diffusion happens when these two speeds work in competition.

Amplification happens when they work in concert.

Modern marketing is about learning to coordinate this energy so both speeds spin together. What links the gears? Your strategy itself—goals, themes and points of view.

Speeds one and two may differ dramatically in tone and technique, but they should be unified in their purpose of moving the needle for the business.

Sign-up for our newsletter with the latest insights, analysis and more.

A CMO by Any Other Name

Four Ways Customer Experience Projects Can Go Off the Rails

The Three Cs of Messaging and Positioning in Marketing: Pick Any Two