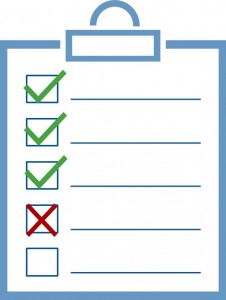 Last December, I made 10 “fearless” B2B tech sales and marketing predictions for for 2017. My blog posts generally drive a little activity on LinkedIn and Twitter, but nothing to write home about. This post however got so much traction that it was the number one post on the Gartner Blog Network in January. So before I make some new ones for 2018, I thought I would revisit last year’s predictions.

Some of them can’t be assessed with a binary “right or wrong” so I have the following categories:

To gauge the accuracy, I looked at the inquiries that I took from tech companies and asked other analyst on my team and in adjacent areas about what they are seeing.  Given that the predictions were made last year and much of our published research is supportive of the predictions, it’s possible that clients who disagreed didn’t raise the issue. But my experience is that many clients are more than willing to tell analysts that they disagree. Now to the results:

In retrospect, my wording was vague and slightly weasely. What does the norm actually mean anyway? But if you look at the volume of inquiries that Gartner has taken (nearly 5x higher than last year), the demand for the sessions I did at Gartner Tech Growth and Innovation (and at other events) and the fact that nearly every client of that size is doing or at least thinking about ABM in some ways, I’m pretty sure I nailed this one. However, my wording was lame and so I can’t give myself full credit. Verdict: Mostly right

#2- The Majority of Tech Sales Development Teams Will Report to Marketing, Not Sales

This prediction probably generated the most ongoing debate throughout the year with strong proponents and opponents of SDRs reporting to marketing weighing in (along with a contingent of people who questioned why it even mattered). If I go with inquiries, the trend seems to be moving in that direction and I could probably make a case that it came true, especially when it comes to inbound SDRs. But we haven’t done formal surveys and I haven’t seen any data that was in the field in 2017 that would prove my point beyond a doubt. But based on what I’ve seen and what I’ve heard from other analysts on the team, we’re probably pretty close to 50/50. Using a strict 50% +1 argument for what constitutes a majority, I’m pretty comfortable that we’ve hit this or are very close. Verdict: Mostly right.

Boy this was another weasly prediction as I look back on it. Very hard to quantify. However, the inquiries are a way up for me as well as the tech analysts and we’re seeing clear signs of the development of true sales enablement platforms (typically multiple products connected via API to drive a cohesive experience for the user). Interest from investors in the space is also way up relative to a year ago. None of this would be happening in a vacuum, so there seems to be a lot of evidence pointing towards a greater focus from TSPs around their sales enablement strategies. While I think there is a lot of room for improvement in sales enablement programs and processes (more on this in next year’s predictions) I’m pretty comfortable with this one. Verdict: Completely right

#4- Partner Enablement Will No Longer Be an Afterthought

Keeping up the trend of weasely predictions, there was a dependency on the previous one here. The evidence however is mixed. Mark Paine leads up our partner and channels coverage and he has seen a modest (but not significant) lift in inquiries. But one thing he has seen is a much greater focus from larger tech companies around improving partner enablement. This greater focus is playing out in terms of investements in tools , both in terms of extending digital content management for sales (DCMS) applications to partner users and providing channel partner marketing systems (CPMS) to partners to run campaigns. That has not extended to smaller and midsize software companies however, likely due to cost and having fewer partners. Verdict: Somewhat right

This one is somewhat hard to assess because we don’t always have line of sight into exactly what content is being created. That being said, we have a lot of anecdotal information that says that people are least more responsive to this idea, based on the inquiries we are taking. And the use of ABM programs is putting more pressure on marketers to create content that can be used later in the funnel. On the other hand, we still get a lot of inquiries where people acknowledge the need to create more down funnel content but haven’t actually made the shift. Verdict: Somewhat right

#6- The Use Cases for Predictive Analytics Will Evolve

What a difference a year makes when it comes to predictive analytics and AI, especially on the marketing side. While we still  get a few inquiries around predictive lead scoring, the numbers are down significantly. Salesforce rolled out many of the Einstein capabilities they previewed a year ago and there has been some turmoil in the market with vendors either exiting or ending 2017 in somewhat precarious shape. On the other hand, we’ve seen several vendors add capabilities and successfully reposition themselves to support other use cases that go beyond scoring (I will address this in my 2018 predictions). There hasn’t been as much disruption on the sales side, but some additional use cases have come up across both sales enablement and sales engagement. Verdict: Completely right

The sentiment that I’m hearing via inquiries (and in talking with vendors that sell into tech sales groups) seems to be pretty supportive of this trend. There is clear acceptance that the SFA must be the system of record, but there is an ever-growing ecosystem of applications that write to and/or pull data from the SFA. Inquiries are up for many of these solutions (see sales enablement) as is investor interest. While most of the applications can be accessed within an opportunity or account record, the experience is not nearly as rich as it is in the native applications. None of this happens in a vacuum. However, I haven’t talked to enough sales operations leaders to definitively say they have all given up and accepted reality. Verdict: Mostly right

This prediction was driven by talking to clients who were using direct mail as one of the engagement channels for ABM programs. And a growing perception that digital channels weren’t resonating as well as they had because buyers had tuned out both e-mail and advertising. We often suggest direct mail as a channel option for clients, but it’s uncommon for them to bring it up. And accurate physical address data still can be an issue. While there is certainly evidence to back this one up (PFL had a booth at Dreamforce for example), I don’t know that we’ve really seen the true renaissance of direct mail. It may take another year to see if this one progresses. Verdict: Mostly Wrong

When I made the prediction, I said this was kind of wishful thinking. That being said, we absolutely see clients being far less reliant on mass e-mail, especially purchased lists. This is especially true with the more sophisticated clients. But wealso see plenty of clients still being heavily reliant on e-mail and while “list purchases” may be down, there is still a lot of cultivating contacts from sales intelligence tools. And there is a case to be made that e-mailing can be smart, if you take a more intelligent approach of contacting the right companies and people (based on predictive analytics and AI). But I was pretty declarative in my recommendation and didn’t leave much wiggle room. Verdict: Mostly wrong

#10- MQLs Will Become a Four-Letter Word

As I mentioned last year, I automatically get this one right because it is already a four-letter word. But looking at this from an intent perspective, it’s kind of a mixed-bag. Most of our clients that have progressed beyond the pilot phase of ABM have de-emphasized the importance of the MQL in favor of account-level engagement. And when it comes to traditional demand generation programs, I’ve taken far fewer of the panicky “I haven’t hit my MQL target” calls. But plenty of people are still going into next year with an MQL target. Furthermore. very few clients are trying to argue the supremacy of the MQL or being as rigid about following the waterfall of their funnel. Verdict: Mostly right.

As prognostication goes, I can live with that outcome. Do you agree or disagree with my assessments?