There is always room for improvement. To date, over 6,700 of you have taken the Wolf Quiz associated with my book, “The Wolf in CIO’s Clothing” and many of you have had great suggestions for improvement. Quite a few of you have suggested additional animals that should have been on the Extreme Animal Profile model.

If you have not seen the model, I have included it below. It describes an individual’s leadership and conflict management style by using seven different animals. I chose the seven animals based on characteristics such as being a loner verses having the ability to lead a group, being predator verses prey, and various other dimensions. 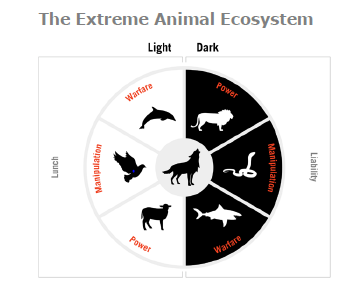 Some of you have been downright adamant that my missing your favorite animals was a big deal and a major lapse on my part. Since it is a bit late for me to change the model, with it being published and all, I’m going to pay homage to some of the many comments I have received about improvements by including them here.

When I visited Alaska, our very nice clients in Anchorage were taken aback that there was no Bear in the model as some of them considered the Bear an important spirit animal. Some were very specific about Black Bear, Brown Bear and Polar Bears. I also recieved some feedback at the University of Alaska that rather than having a generic wolf, I should have had their mascot, the Seawolf.

When visiting with members of the US Military, I also recieved feedback that there should have been an Eagle or a Hawk in the model. Many military units are named after predatory birds and they serve as a great inspiration.

In Australia, after doing some regional research, I noted that the most deadly creature in the area turned out to be a Box Jellyfish. Incredibly, the invetebrate kills more people in Australia than any other creature. A reporter who was present in my session then wrote an article which cast aside my wolf in a good-natured fashion, entitled, “Want to Succeed in IT? Be a Box Jellyfish!”

While our African clients liked that a Lion was in the model, they have lobbied for the other big cats including the Cheetah, Tiger, and Jaguar. Some people in different regions also lobbyed for a house cat as a symbol of the perfect predator. Being a cat lover, I really can’t argue with them.

One of my favorite improvements on the quiz came from Darryl Ackley from the State of New Mexico. Darryl saw his quiz results, and went so far as to rewrite them and send them back to me. He sent an email entitled, “Wolf in CIO’s Clothing Leadership Style Assessment aka, Your Spirit Animal 🙂 ”  Turns out, Darryl’s spirit animal is Wolverine. Not a wolverine. The Wolverine. Below, is Darry’s improved version of his quiz results:

Being a huge fan of Wolverine, and Hugh Jackman, I did love this rewrite. So thank you Darryl for sharing it! Interestingly, on an MTV news interview Hugh Jackman admitted that when he initially prepped for the role he studied wolf behavior and wolf packs, thinking that Wolverine must refer to wolves. His producer had to explain to him that the Wolverine was actually a different animal, and part of the badger family.

I want to thank everyone for all of your improvements on the model and appreciate your engaging in these discussions with me. Ultimately, I believe you should take leadership inspiration wherever and however you find it, and then adapt it to make it personal to you.

If you have not taken the Wolf Quiz yet, please feel free to at Gartner.com/wolfcio to get your Extreme Animal profile.

Are You a Badger, Nice, or Both?