Recently, a good friend sent me the following picture and I felt compelled to share it with you. 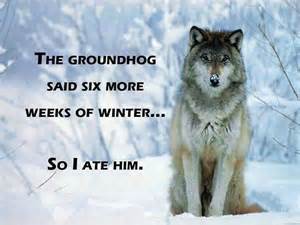 For those of you from outside the US and not familiar with the local context, please allow me to explain. In a popular piece of American folklore, many believe that if a Pennsylvania groundhog, lovingly named Punxutawney Phil, sees his shadow on February 2nd, then we will have six more weeks of winter.

Yes, apparently our adorable fluffy rodent is a mini-meterologist, so for one day a year we simply ignore doppler radar and abandon any other technology generally used to predict the weather, thank you very much. This year, Phil did in fact see his shadow and very accurately delivered the bad news that we were about to have six more weeks of the coldest winter the United States has experienced in decades.

Depending on the region of the world in which you live, you may have your own little animal prognosticator who foretold abnormally bad weather such as the polar vortex, Middle Eastern and European snow and flooding, Australia’s extreme heat, China’s and India’s exceptionally cold weather, or Brazil’s record breaking temperatures.

Well, we’ve all had enough of bad news. And as the wolf above so effectively expressed, if you are going to deliver bad news, you had better not be small and tasty.

So you may be asking yourself if this weather rant of mine has anything to do with IT, or if I’m just really annoyed at the weather. Well, it is actually both. Please recall the last time you as a CIO or IT executive had to deliver bad news to someone about an IT project, security breach, or some other technology mishap. In the aftermath, were you the groundhog, or the wolf?

A few weeks ago I had the honor of speaking to an audience of US Air Force IT leaders. No one knows better than a military leader the importance of not being a “soft target”.  They build their weaponry and reputations in good times, so that fewer will take them on during bad times. And I believe that sometimes, IT is viewed as a soft target in bad times – easy to blame, easy to get away with chewing on us a bit, and little fear of the repercussions for taking a bite. We need to put an end to this.

Many assert the belief that “the best defense is a good offense”. While I do largely agree with this, I find that many IT executives find the sentiment too aggressive for their taste. For them, I suggest an alternate thought which is, “the best defense is to not be a soft target.”  When CIOs actively build their track records, reputations, and take accountability without inordinately taking blame, they shift from soft target to formidable ally, partner and leader.

One thing is certain; the bad weather will end. I like to think that the opportunities for CIOs to deliver good news greatly outweigh the bad news you sometimes have to deliver. If you are not feeling that way at the moment, please just make certain that no-one thinks you are a groundhog.

If you have any tips to share with other CIOs and IT executives on how to take accountability without taking blame, and how otherwise not to be a soft target, please feel free to share by commenting here! In the meantime, please stay warm or cool, depending on where you are!

Your Improvements on the Wolf Quiz