Virtualization was dominated by on-premises enterprise virtualization, and on-premises private clouds were the primary sourcing model for VMs offered as a service – for a few years. Certainly not true today.

In 2011, roughly 3 percent of all virtual machines (VMs) were sourced in public cloud IaaS providers (mainly Amazon). That was also roughly equal to the number of VMs being delivered in true on-premises private clouds (standard offerings through self-service with automated delivery – NOT custom-provisioned, NOT manually delivered).

A lot’s changed in three years. 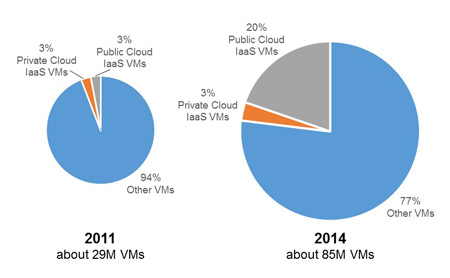 At the same time, isolation options from public cloud providers are growing – more and more are offering semi-private, virtual-private, or fully-private capabilities.

Also, the demographic of workloads in each are very different – public cloud VMs are much more likely to be used for horizontally-scalable, cloud-friendly, short-term instances, while private cloud tends to have much more vertically-scalable, traditional, long-term instances. There are certainly examples of new cloud-friendly instances in private clouds, and examples of traditional workloads migrated to public cloud IaaS, but those aren’t the norm. New stuff tends to go to the public cloud, while doing old stuff in new ways tends to go to private clouds.