By any measure, private cloud computing has become a major trend since the concept was first publicly discussed in 2008. While it isn’t mainstream yet, many enterprises have deployed something, and have plans to expand. Market hype is being replaced with focused investments and realistic plans.

Gartner’s Data Center Conference tends to draw infrastructure and operations decision makers from larger enterprises. Polls taken in sessions at this conference have proven to be fairly good barometers of the large enterprise datacenter market – even with small sample sizes. So I found it fascinating when the results for polls about hybrid cloud computing taken in December 2012 nearly matched polls for private cloud computing from December 2009. 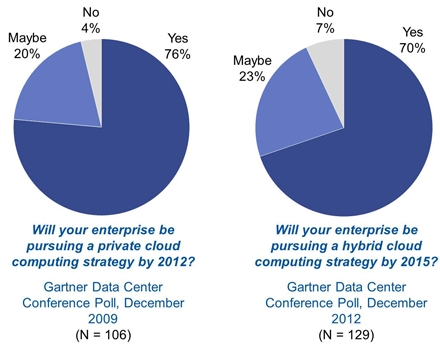 Of course, aspirations rarely become reality. I also asked attendees in December 2012 about private cloud progress – 44% had deployed something, 45% were planning to deploy something, and only 11% had no plans. Not quite the 76% who aspired to be there – but progress, nonetheless. 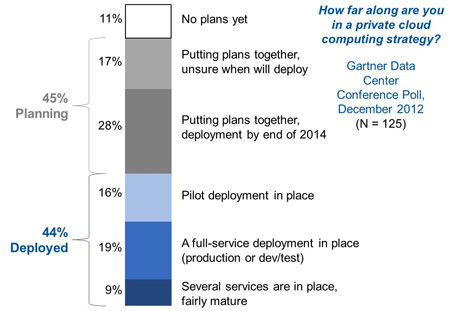 While we can’t draw too many conclusions, indicators are pointing to hybrid cloud becoming an interesting trend in the next three years. Yes, hybrid is overhyped, and the idea of cloudbursting will need to be brought to Earth a bit – most hybrid cloud deployments will be managed at provisioning-time, not quite as dynamically as “bursting” implies. While there are certainly challeges to overcome, I actually believe the challenges are less daunting than the transformations that private cloud computing drives (in process, culture, funding models, skills and organization).