When I wrote The Consumerization of Truth, and Virtual Villages, little did I know that I was about to be thrust into the middle of wildly divergent worldviews. My blog post discussed how a connected world of people devolves into polarized and radicalized worldviews, as like-minded people confirm each other’s beliefs. Three days after my blog post, tragedy struck my school and neighbors. 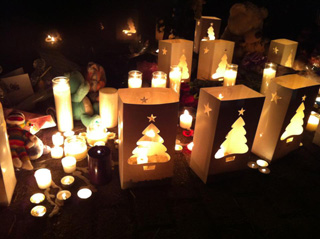 We live in Sandy Hook, Connecticut. My kids all attended Sandy Hook School. I was a cub scout leader there for ten years. My wife ran the school newspaper. We’ve lived in Sandy Hook for nearly two decades. This is our town, and our school. On December 14, twenty first graders and six adults lost their lives there in a mass shooting. We didn’t know all of them, but we knew many of them, and had connections to many others. We live in a small, rural town, and neighbors know and take care of their neighbors. So it wasn’t surprising when many of our neighbors immediately created meal circles, volunteered services, organized. With several friends, I co-founded Sandy Hook Promise, and focused my energies on helping the families of the victims in whatever way I could.

All of us wanted something positive to come from this tragedy, so it wasn’t long before we were looking at what should change in school safety, parenting, mental health and gun responsibility. We had to make what happened to us less likely. It didn’t take long before we found ourselves on a national stage, in the middle of very polarized worldviews on guns.

Different points of view are perfectly understandable . What shocked us was how our very horrible truth became someone else’s conspiracy. I had no idea that there were Americans who simply could not accept what we knew was true, and instead preferred to believe that we were actors, that no children died, that Sandy Hook was a staged event designed for one purpose – gun control. These Americans consider themselves patriotic, many consider themselves religious, and yet they abused the families of victims, with posts on Facebook, hours and hours of YouTube videos, web sites, phone calls, letters, and face-to-face “investigative” visits to Newtown.

There will be two kinds of people who read this: those who find their behavior abhorrent, immoral and out of touch with reality, and those who believe I am a part of the conspiracy.

How can this be?

Our connected world makes it so much easier to find people who think like you do. So a person who is already biased in their opinion will seek out others who think the same way, seek out information that matches their opinion, ignore information that doesn’t fit their worldview. It’s called confirmation bias (see some very interesting articles here and here). While it’s hard to understand how a person can believe something that is so out-of-touch with reality, it needs to be seen as a slippery slope. They likely didn’t start that way, but when two people start to question things, it amplifies. Now multiply it by hundreds, or even thousands. At one point, they weren’t sure. But when confirmed by others who weren’t sure, it becomes their truth. A virtual village is born.

Is there any way to avoid this divide? Will it get worse?

I don’t know. And that’s a scary statement about society.

I worry about the press becoming a mouthpiece for bias. I worry about an education system that continues to train people to be old-world bureaucrats and factory workers, when we need critical thinkers. It isn’t just important, it’s paramount that we make a tremendous effort to arm our children to be smarter information consumers.

As we say in Newtown, “Choose Love.” For the sake of our society, I can only hope that the bias that wins the day is a bias toward love, and grace. If it does, everything else will sort out – as long as we use our heads.