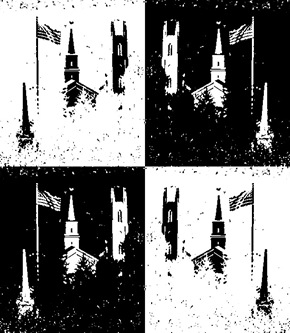 When Thomas Friedman argued that the world is flat – that connectivity and speed have converted the world into a level playing field with near-zero market friction, I agreed with him in theory. But in practice, especially in society, we have a very different reality – because a level-playing field means little when the players are people, and they stay in their various corners.

The world may be potentially flat, but humanity is wildly divergent, local, locally-nurtured, and opinionated. I contend that connectivity is making things worse, more divergent, more radicalized, and not “flatter.”

Idealists saw the Internet and the connectivity it created as the great melting pot of ideas. We could have different opinions, but reach a consensus; different views of facts, but bad data would be self-correcting. The absolute opposite has occurred, because people are using the Internet. We can connect with anyone, and discuss any idea – but we don’t. People seek out like-minded people, and become more and more radicalized in their views. We are still villagers, but unlike the village of old, we get to define our own village, and we tend to build villages full of people who are just like us. Different views of facts create entire worldviews based on falsehood, or spin. Bad data propagates, mutates and spreads like wildfire. Topics like politics, religion, evolution, global warming, race relations are becoming more and more polarized.

This is the “consumerization of truth.”

It’s certainly true that the Fourth Estate (i.e., the press) has evolved into something very different in the past few decades. Mass media has become more opinionated, and it is hard to identify a news source that isn’t labeled “liberal” or “conservative” anymore. But I think that’s only a part of the problem, and perhaps just a small part.

The Internet is a wonderful replication and transmission mechanism for memes (in the form of opinions, worldviews, “facts”). I believe that the consumerization of truth is much more about meme creation and replication on the Internet, than what a major news network says. More importantly, I believe worldviews are created not just by a single meme, but by a constant barrage.

Here’s an example of a single, common meme that originally replicated in email, and more recently, in Facebook – a photograph of a newspaper article. In the article, a man named “Tyrone” in Georgia stole a laptop, and as he was leaving the store, several marines selling toys for tots stopped the thief, with one of the marines (with an Irish name) getting wounded by a knife in the process. The police reported that Tyrone was injured by falling – many broken bones, broken nose, missing teeth, etc. – implying, of course, that the marines levied their own justice.

In a recent post of this meme, 99% of those reading it (out of 400+) believed it was true and appropriate. Semper Fi. Only 1% realized that the article was a fake, based on a true story. The real bad guy was named Tracey (less “cultural”), not Tyrone. The marines didn’t beat up the guy, and in fact he was captured by both marines and store security. In other words, the meme tells a story of good-guy, white, John Wayne marines dealing with a bad black guy, and the police turning a blind eye on vigilantism.

By itself, this is only one false data point in someone’s worldview. But when you are inundated with stories and pictures with a similar theme, it has an effect – views on race relations, the military, appropriate justice – they all evolve, just a little. Before long, a person can be radicalized. Someone might even act based on that, based on their own view of what is right and “normal.”

I think this also explains how the different camps in the 2012 U.S. presidential election had such completely different views on who would win the election. Certainly, mass media had an effect, but I think the virtual village effect was even more important – when your primary conversations about projections were with like-minded people, you became more and more convinced you were right. How else do you explain Karl Rove’s utter confusion when Fox News called Ohio for Obama?

There’s a parallel here with the consumerization of IT, where consumer devices are invading the workplace. In the good old days, the IT organization had control, and could erect security boundaries around all software and hardware connected to enterprise IT. Now, users BYOD (bring your own devices), managed and unmanaged diversity are the rules, and security perimeters are shrinking. Enterprise IT has less control.

In consumerization of truth, there’s less control of information creation, replication and distribution. “The truth is out there,” but everywhere, and wildly divergent. We cannot “control” all of these truths. All we can really do is educate the consumers to be better at filtering and analyzing the flood of information coming their way. This starts with our education system. Unless we make a tremendous effort to arm our children to be smarter information consumers, email, the Internet, Google and Facebook will continue to divide and radicalize us. I fear for a world divided into polarized virtual villages, continuing to mutate their opposing worldviews.

But, let’s have some hope here. Maybe, just maybe, this is a generational problem. Maybe the generations born into this connected world will be smarter about navigating it. Maybe. But we can certainly help that along, can’t we?