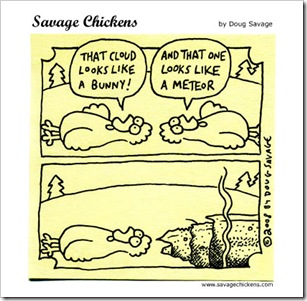 I’ve been looking for an excuse to use this cartoon – I finally found it!

I’m finishing a research note on some polls I took recently of data center executives, managers and decision-makers. Interesting results. Here’s a summary:

(1) The first poll was focused on the top three concerns that data center professionals have with public cloud computing. The weighted score for “Security and Privacy” was more than the score for the next three concerns combined. Sometimes, when it looks like a meteor, it is a meteor (see, I got the cartoon in here)!

Once again, thanks to Doug Savage for allowing me to use one of his cartoons (check out the others on his site).