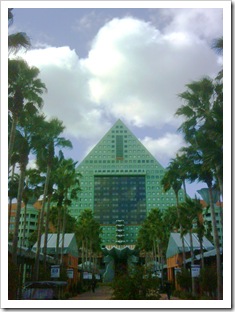 At this week’s Gartner Symposium in Orlando, there was a noticeable shift in the end user discussions regarding virtualization and cloud computing, and a few surprises:

1) In my presentation on server virtualization on Monday, before I started, I asked the audience how many of them considered private cloud computing to be a core strategy of theirs. 75% raised their hands (I expected maybe one-third). Clearly, everyone has a different idea of what private cloud computing means (or doesn’t), but the fact that so many people have glommed onto the term is very interesting.

I described the three most common things that were being described as private clouds:

3) Several one-on-ones were very interesting: one company with more than 5,000 VMs heading toward 10,000; maybe a dozen that were focused entirely on taking their leading-edge virtualization infrastructure into private cloud; three companies considering discussions with Terremark on possibly licensing their service interface and usage metering software (they know VMware will probably deliver something in a year, but don’t want to wait); several users wondering what Microsoft’s virtualization strategy was, and especially whether they were focused on private cloud computing as a next step; one that questioned VMware’s vendor maturity with respect to customer relationships (felt that Microsoft did an excellent job with TAMs and so forth to truly work with the customer as a trusted advisor – while VMware’s TAMs were more like communications conduits).

4) In my “debate” with analyst Eric Knipp (on the topic of public vs. private cloud computing), we took a vote at the beginning and end of the session to test audience opinions on the subject. At the beginning, about 15% felt that public cloud computing would “win” (the question was intentionally vague to let the attendee decide what “win” meant). About two-thirds though that private cloud computing would win. By the end of the debate, perhaps a few more thought public cloud would win, about 40% thought private cloud, and about 40% voted otherwise (which included a hybrid model). I suppose the surprise to me (yet again – do I never learn?) was the overall momentum in the concept of private cloud.

The challenge with private cloud computing, of course, is to dispel the vendor hype and the IT protectionism that is hiding there, and to ensure the concept is being used in the right way – as a stepping-stone to public cloud, based on a timing window, the lack of a mature public cloud alternative and a good business case to invest internally.