Retailers have shifted into recovery mode as Governments start to lift lockdown conditions in certain Western Markets (see last week’s blog for a broader discussion of the 3 phases retailers will go through during the COVID-19 crisis: respond, recover and renew).  However, with lockdown approaches varying significantly from country to country and even state to state (for my U.S. based readers this is useful tool from the NYTimes showing state by state approaches), retailers need to be extremely agile in their approach.

Some are getting onboard with the re-start such as Dick’s Sporting Goods who have re-opened select stores across 9 states in the U.S. However, others such as Gap Inc are taking a more conservative approach and do not as yet have plans to re-open stores, although they are “closely monitoring the situation” and will re- open when they “feel it is safe to do.”

For retail leaders this raises a key question – how distorted will sales be given the wide variance across markets, the huge disruption lockdown has caused to consumers lives including significant increases in unemployment and the potential for a second wave of COVID-19?

Many are looking for directional insights from China which started to re-open in early March and businesses are focused on U-, V- or W-shaped recovery curves (I’ve previously discussed China’s post-lockdown recovery in a blog here and Gartner clients can see a more detailed analysis here). However, with retail stores in Germany that are 800 square meters or less (roughly 8,600 sqft) allowed to re-open as of last week, leading businesses are closely tracking how quickly German consumers return to stores. 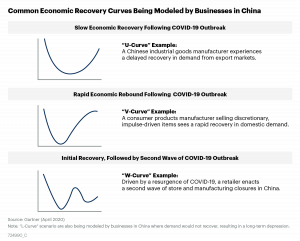 My personal takeaways from the above:

Below are this week’s selection of interesting reads from across the web:

Finally, Gartner continues to produce a wide array of content in all our usual areas while also providing focused research on COVID-19 with a significant volume of this made publicly available here. For Gartner retail clients, one of the best, most useful documents published in recent days is by my colleague Tina Hu and I: What Western Businesses Can Learn as China Comes Out of COVID-19 Lockdown

Until next week – stay safe, look after your family and social distance.

Note: I’m currently publishing this blog each Monday morning (US Eastern Time) so if you’ve found this one useful please do look out for a weekly notification from my account on LinkedIn.

Beyond COVID-19: How Apparel and Footwear Retail Will be Impacted

Innovation Inspiration for the Disrupted World of Retail Supply Chains