Big data is moving from closets full of hidden Hadoop clusters into corner offices, where CEOs and boards of directors issue orders to deliver “big data strategy,” whatever it means. This is called “Activity beyond early adopters” in Gartner’s Hype Cycle.

Once in awhile, I get requests to help explain big data, so it would be understood by any curious pedestrian, who is eager to learn the meaning of that very technical term, which has something “big” in it. 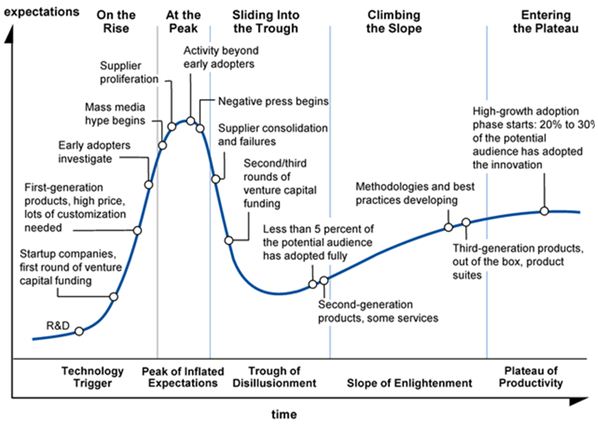 Some years ago, a friend’s brother wanted a mail order bride, but his capacity of bringing in the brides from overseas was limited, so he decided to travel to a strange land, “go to catalog,” so his choice of brides would radically scale up.  The ability to process data in-place is similar: processing moves “to catalog,” the initial overhead is high and the land is strange until you get used to it.  Some people enjoy it, some – go back home.

Microsegmentation — the segment of one instead of clusters of many: a 32-year old blond who likes coffee with sweet cream is a more vivid marketing target than a cluster of soccer moms between 30 and 40. The best explanation of microsegmentation I can think of is by the Argentinean writer Julio Cortazar, a master of magic realism (a literary genre about magic elements being a natural part in an otherwise mundane, realistic environment). Magic realism sounds to me like big data analytics, as presented by many vendors. I couldn’t find Cortazar’s “Cronopios and Famas” online, so I re-typed this little story below from a book. Even its title alludes to data sciences!

HIS FAITH IN THE SCIENCES  (Julio Cortazar on microsegmentation)

An esperanza believed in physiognomical types, such as for instance the pug-nosed type, the fish-faced type, those with a large air intake, the jaundiced type, the beetle-browed, those with an intellectual face, the hairdresser type, etc. Ready to classify these groups definitively, he began by making long lists of acquaintances and dividing them into the categories cited above.

He took first group, consisting of eight pug-nosed types, and noticed that surprisingly these boys divided actually into 3 subgroups, namely pugnoses of the mustaches type, pugnoses of the pugilist type, and pugnoses of the ministry-appointee sort, composed respectively of 3, 3, and 2 pugnoses in each particularized category. Hardly had he separated them into their new groupings (at the Paulista Bar in the calle San Martin, where he had gathered them together at great pains and no small amount of coffee with sweet cream, well whipped) when he noticed that the first subgroup was not homogenous, since two of mustache-type pugnoses belonged to the rodent variety while the remaining one was most certainly a pugnose of Japanese-court sort. Well. Putting this latter aside, with the help of a hefty sandwich of anchovies and hard-boiled eggs, he organized a subgroup of the two rodent types, and was getting ready to set it down in his notebook of scientific data when one rodent type looked to one side and the other turned in the opposite direction, with the result that the esperanza, and furthermore everyone there, could perceive quite clearly that, while the first of the rodent types was evidently brachycephalic pugnose, the other exhibited a cranium much more suited to hanging a hat on than to wearing one.

So it was the subgroup dissolved, and as for the rest, better not to mention it, since the remainder of the subjects had graduated from coffee with sweet cream to coffee with flaming cognac, and the only way in which they seemed to resemble one another at the height of these festivities was in their common and well-entrenched desire to continue getting drunk at the expense of the esperanza.