AI in the EnterpriseAI

Bias is one of the stereotypical dangers of AI. Those who refer to bias are often biased against… AI bias. We have seen enterprises spending unnecessary resources to eradicate AI bias, because they presume without due diligence that bias is always bad. Meanwhile, bias is a natural effect of learning. It cannot be completely eliminated, but it can be managed.  For example, transparency of the analytical process and assigning trust levels to data and algorithms reduce risk of unintended consequences. 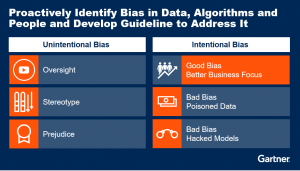 Data, algorithms and the people who select them can all be biased. Bias can relate to race, gender, age, location or time. But some forms of bias are desirable — for instance, avoiding bad language and favoring empathic, polite and patient language are forms of bias toward what you rightly think is important for conversations between AI-enabled systems and people.  Data for AI often contains incomplete or skewed information. Sometimes, it is not even possible to ensure representative data to cut AI bias. What is possible? It is possible to raise awareness of critical thinking when it comes to interpreting the data – data just reflects who we are and what we do. What starts as a human bias turns into an algorithmic bias.

People who personally deal with bias in AI report becoming less biased themselves.  For example, Ericsson uses a scenario planning approach to challenge strategic thinking across the organization and test for and screen out biases at multiple stages of the strategy development process (Gartner described it in Common Cognitive Biases in R&D Decision Making).

Cultivate the beginner’s mind. We described how to do that in Maverick* Research: Relieve AI and Data Science Negligence With Mindful Awareness.  The beginner’s mind allows people to make informed choices and business decisions, rather than perpetuating “good old” approaches and lurking biases. The beginner’s mind gives the experts flexibility and adaptability, it also allows the practitioner to ask new questions and spot new answers to old questions.