In August 2019 Microsoft announced new rules for licensing its software for use on “dedicated cloud hosts”, including Amazon’s AWS, Google’s GCP, and Alibaba (https://www.microsoft.com/en-us/licensing/news/updated-licensing-rights-for-dedicated-cloud).

Office 365 and Windows changes took/take effect the next time the organization renews their Microsoft agreement after October 2019 and Office 2019 changes took effect on 1 October 2019. Gartner wrote about the server licensing implications in G00391683, but the implications on client software, and more specifically VDI and DaaS, are more difficult to understand.

The changes could present significant challenges for organizations committed to Office 365 and want to run VDI or DaaS in the cloud. The announcement affects how Windows 10, traditional Office, and Office 365 must be licensed for running VDI or DaaS on Alibaba, Amazon, and Google clouds (referred to by Microsoft as “Listed Providers” http://aka.ms/listedproviders). While Microsoft actually includes itself as a listed provider, the licensing materials include clauses that exclude Azure from some of the new rules.

Products are affected as follows: 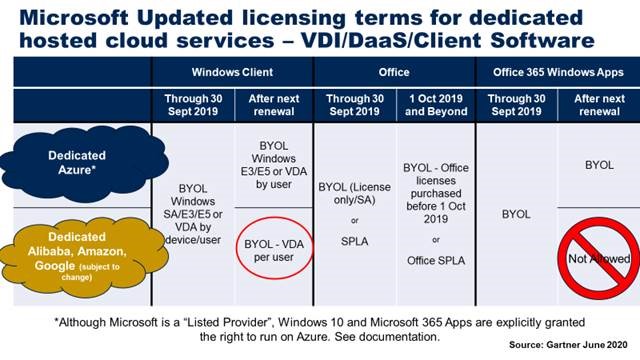 So how should organizations preferring to utilize one of the listed providers and run Office365 through that environment proceed? Options are limited and may entail revisiting plans, compromising through use of classic Office applications rather than Office365 (which has its own problems), or a challenging negotiation.

Links to Gartner research on DaaS and related strategy considerations