Today I’m back at my keyboard after two weeks of project managing renovations and spending time with family. It would be a major exaggeration to say it’s back to normal today as we’re a way off that and it will be weeks until I return to our modified home HQ.

By contrast It may also be an exaggeration to say that a lot has changed in the software channel over that time given the constant cadence of change, a few items are worth some analysis.

This is notable for the questions the move raised. Principally, why?

Although I predicted consolidation in 2016 ‘By 2020, 10% of existing software resellers will have been acquired or merged into other reseller brands as part of a continuing market consolidation to deliver reseller services globally’ it’s challenging to see a great deal of benefit in like for like acquisitions enhancing differentiation unless they provide international organizations with a supplier that has enhanced presence. Global orgs looking for a partner with extensive presence may have preferred an alternative strategy, much of the global software marketplace will be unaddressed by the choice of target given PCM adds no new locations.

Having made five services acquisitions recently and bolstering its services revenue percentage, PCM represents the acquisition of a reseller with <10% services revenue. Market share will be improved by the acquisition in the applicable markets, and revenue improve towards the likes of CDW and SoftwareONE, will that increase in volume and revenue fund service development however? North American businesses lose an alternative option from an already narrow field of software resellers following this as well as the recent SoftwareONE/Comparex deal, PCM’s prior acquisition of En-Pointe and Connection sweeping up Softmart. 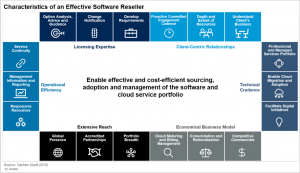 The Australian Digital Transformation Agency (DTA) has established a centralised mechanism for all agencies to procure AWS services. The whole of government structure isn’t new, nor may it be the largest deal of its type, however it represents a step to create standardized mechanisms and streamline the cloud services procurement exercise. Said to be applicable not just to commonwealth (national) agencies but importantly also to state and territory governments plus tertiary institutions represents a step that could be followed by other national government procurement agencies.

Microsoft announced, then quite rapidly reversed what proved unsurprisingly to be a controversial decision to remove licensing grants which have been long offered to its partners https://blogs.partner.microsoft.com/mpn/updates-program-change-announcements/

The change proposed would have likely added significantly to Microsoft revenues, far exceeding the cost effect (which some Microsoft communications suggested was a motivator). Given the extent of Microsoft partners across the globe It’s not inconceivable that revenue figure could have added 1-2% to Microsoft’s top line annually. With a range of OS, productivity and management licenses being made available to even the smallest of partners without an attached competency. Layered on top of that much larger quantities of licenses are provided for each Silver or Gold competency gained. Even large partners with volume licensing benefit from many of these.

Many channel entities already have working relationships with Microsoft competitors. The risk of those alternative relationships being furthered as a reaction to Microsoft increasing revenue at its channel’s expense would not be unreasonable to expect. Microsoft would have potentially lost far more than it gained by aggravating its channel with these changes.

Had the decision not been reversed, the tone at Microsoft’s annual global channel event Inspire this week would have been incredibly negative, potentially eroding the positive value of the event. Even the proposal, now reversed, will have eroded some trust.

Footnote – Microsoft has unfortunately taken a restricted approach to Inspire attendance, accordingly yours truly won’t be broadly covering the event this year aside from keeping a judicious eye on announcements and developments.