Microsoft’s annual Autumn conference landed in Orlando last week (just prior to Gartner Symposium) and is somewhat targeted at a technical audience, but this year’s event included a set of announcements and steps that may interest professionals of the less technical variety.

The release of the broader bundle of offerings under the heading of Microsoft 365 for Firstline Workers (F1) differed significantly.

It’s introduction may have come as no surprise to some, and stood out (as well as the E1 offering) as absent from the lineup of the initial Microsoft365 bundle and it’s equivalent prior offerings Enterprise Cloud Suite and Secure Productive Enterprise.

To accompany F1 Education Editions (A3 and A5) of Microsoft 365 were also announced and are already available this week. One may argue Microsoft have chosen to market online services to a broader set of users, with the single SKU approach making it arguably more straightforward to capture addressable revenue. 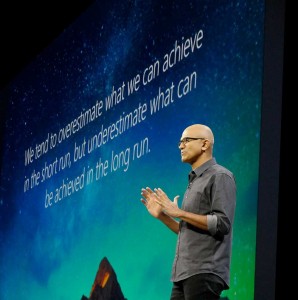 Perpetual Office – ‘I’m Not Dead Yet’

At Gartner’s 2016 ITAM conference series I spoke about the continuing validity of perpetual license options, with a little help from Monty Python. Whilst Microsoft’s steadfast commitment to a ‘Cloud First’ strategy may have led some to believe it would not happen, Microsoft confirmed Office 2019 (including Office Server product releases for Exchange, SharePoint and Skype for Business) is coming and will be available as a conventional perpetual on-premises offering.

In a move which will potentially rationalise the Microsoft Communications and collaboration offering set, Microsoft announced it will evolve Teams to become the primary client for communications in Office 365 – replacing the Skype for Business client over a yet to be confirmed period.

Indicative of Microsoft’s go to market for Office365 maturing are the announcements of Office 365 Usage Analytics and Advanced Usage Analytics, both to be available in 2018. Whilst the cynical may have stated it suits cloud vendors not to provide visibility of unused services, Microsoft appear to have stepped up their game and built a series of tools that should assist clients to right size and optimize their Office 365 services while identifying where resources are being underutilized.

Whilst I may have given Microsoft’s Modern Workplace announcement prime billing in this piece, Azure and the broader set of Enterprise Cloud offerings certainly don’t take a back seat.

Azure Windows Reserved VM Instances were announced and expect to become available starting before the end of this calendar year. Whilst the concept is not new (AWS Reserved Instances have been long available) Microsoft are positioning this Azure option with a means to not only access lower unit prices but with flexibility to cancel (with a yet to be disclosed fee) or exchange (credit) the services at any time.

Similarly to usage analytics being made available in Office 365, Azure Cost Management Services (a product of the Cloudyn acquisition) has been integrated into Azure and made available as a resource to enable cloud cost management. When considered in combination with the re-alignment of sales to Azure consumption from rudimentary revenue announced at Inspire, it appears Microsoft has chosen to address over expenditure on Azure through both under-consumption of services and unnecessary toxic consumption. In other words, taking a longer term customer value view over short term subscription revenue.

Breaking from the recent trend of two year update cycles, a little over a year after the previous version, SQL 2017 has become available immediately following Ignite. This release includes a change which makes if platform agnostic and available for use on Linux as standard utilizing the same Standard and Enterprise licenses as is the case for Windows Server. Having said SQL will be ‘platform agnostic’, to support uptake of SQL on Linux, Microsoft are offering a discounted Linux-specific subscription license for SQL Server 2017. Also announced at Ignite, Microsoft are launching a SQL Server Hybrid Use Benefit – this usage right is expected to operate similarly as the same benefit for Windows Server, however terms were missing from the October Product Terms update.

Windows Server Semi Annual Channel wasn’t announced at Ignite, however the first semi annual release was confirmed to arrive in early October. To take advantage of these updates Software Assurance will be required on the relevant servers.

Want to know more? Over 700 sessions of Ignite content are post and available here or speak to one of our vast analyst community either at Symposium or the Gartner client inquiry service (subscription required).