Did Walmart Unintentionally Prove The Supremacy of Consistent Cross-Channel Pricing?

Walmart’s rate of ecommerce sales growth dropped to just 23% in Q4 after achieving nearly 50% for the first 3 quarters of the year.  While it indicated that out of stocks due to operational issues were partially to blame, I believe that much of the blame falls on an attempt to raise online pricing.  In November, 2017, the Wall Street Journal stated that “Walmart Stores Inc. has begun listing some items, including many food products, at higher prices on its website than it charges for buying them in its stores in an experiment to make its online operations more profitable”.  This was a bold and counter intuitive tactic, to raise online pricing as a way to push customer into the store, and therefore increase the average price per item in the online basket, but it proved Gartner’s long held position of proactive cross-channel pricing with situational differentiation.

Proactive cross-channel pricing execution – The ability to identify appropriate pricing for a given product, based on customer response as well as competitive and strategic market positioning, while executing in all channels in an efficient and timely manner.

Reactive price execution – exemplified by retailers that respond without analysis or planning to counteract competitors’ strategies and tactics only within selected channels.

Any pricing discrepancies must be clearly stated to the customer and must be considered “logical” by the customer.  For example an online only promotional item or a regionally based markdown of products in store can be understood by most consumers.  Although this pricing strategy change by Walmart was described in reporting as impacting only some products, my experience was that the price difference was both broad based and substantial.  Perhaps more importantly it was not executed in a customer-friendly way.  This was clearly a reactive strategy driven by concern over declining profitability.

In early December I became determined to encourage my wife to place our first online grocery order from Walmart.  Having seen the handy reorder tab in the Walmart App, I told her how easy it would be to just click off a list.  Not long after however, she came back to me and said everything was significantly more expensive and she refused to pay those prices.  That started my quest to find out what was happening.

Disbelief: Surely she was mistaken, Walmart offers consistently low prices.  But alas no, prices were in fact significantly higher.  In just one example,  Munchies snack crackers were priced 34% higher online than in my local store: 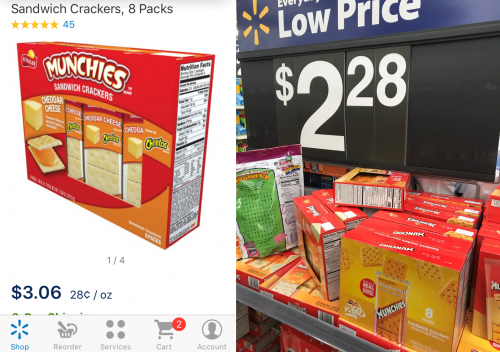 Images from the Walmart App and an in store display on December 17, 2017

Once I noticed this pricing was for an online order, I wondered if the store pickup price would reflect a match.  Try as I may, I could not find a way to order for store pickup from within the app so I contacted Walmart’s online help.  The conversation went like this:

Online chat with Walmart help through the app on December 16, 2017

Still in disbelief:  Not having found a reasonable answer through the help facility, I went back online to again try to figure out the pricing policy.  After much searching on Walmart.com, I could not find anything that made this pricing strategy clear.  Then I tried to place an order for store pickup online and things started to crystallize.  Having been directed to the Walmart Grocery site I learned that if I selected store pickup for the order the prices shown did match the in store pricing.  This is really puzzling because I suspect an order that is picked from store shelves by associates is significantly more expensive than one picked in a distribution center.

Experiencing some Success: I could not find the same reorder capability that was offered by the app while on the website but I did manage to place an order manually.  From that point, the experience was quite good.  The order was ready when I arrived, the associate that brought it to the car was very responsive, and although there were several out of stock items, mostly good substitutions were offered.

The takeaway for multichannel retailers is clear.  The customer sees the retailer as one organization, there are not two different Walmart’s.  Customers will not accept divergent pricing strategies except where an obvious and logical reason for such is clearly identified.  In this case, Walmart decided to take an approach that, while obvious to internal executives, was completely illogical to its customers.  Making it worse, this was done in relative secrecy, with no explanation to customers.  As illustrated by my search, it may not have been understood by front line associates.   In this instance I persevered and placed my order.  I suspect that a less vested customer would have just abandoned the idea.

A spot check on the Walmart App today seems to confirm that the pricing is now closely aligned with the in store purchase price.  I suspect that this reversal is in direct relationship to the guidance of 40% ecommerce growth for 2018 that was issued by Walmart with its recent results.

Later we explore the lack of consistency in execution capabilities across multiple web sites and apps.

Bob Hetu is a Research Director with the Gartner Retail Industry Services team. His responsibilities involve tracking the technology markets and trends impacting the broad-based retail merchandising and planning areas. Mr. Hetu is an expert in the areas of brand, vendor and assortment management, merchandise planning, allocation, and replenishment. Read Full Bio

Thoughts on Did Walmart Unintentionally Prove The Supremacy of Consistent Cross-Channel Pricing?