The Bake-Offs are fast-paced, informative sessions that let you see vendors side-by-side using scripted demos and a common data set in a controlled setting. We had been doing these BI Bake-off sessions in person at our D&A summits prior to the global pandemic. In fact, they have been some of our most popular sessions. Like all of you, the pandemic forced us to innovate and we did our very first virtual BI Bake off in October of 2020 and then again in May of 2021 – and they were awesome! But, like the smell of freshly baked bread or cookies – virtual is just not the same! There is NOTHING like the energy, vibe and fun of a live and in-person Bake-Off!!  And these did not disappoint!

For the vendors that participate in the Bake-Off, it is in equal measure fun and extremely stressful. It’s a high stakes session where they put everything on the line in front of their arch competitors, revealing what’s coming and coveted sales tactics all while being judged by attendees. It takes a fair bit of preparation, extreme commitment, and an ability to shine under pressure.

As in 2019, to extend the Bake-Off experience to a broader range of vendors, including smaller innovators, this year in Orlando, we also did a series of Show Floor Showdowns. The Show Floor Showdowns are held on the Exhibit Hall show floor and are based on the same demo script and data set used in the ABI Bake-Off. Any vendor that Gartner has covered in any of its research and all vendors that had a booth in the Data and Analytics Summit, Orlando Exhibition Hall could apply to participate in Show Floor Showdowns. From there, six participants were randomly selected and invited to present live at the Show Floor Showdown sessions. The Analytics and BI Show Floor Showdown presenters in company alphabetical order were: Domo, EQ Technologic, iGenius, LTI Lumin by Fosfor, Tellius and ThoughtSpot.  We also gave the demo script and data set to all vendors in the Exhibit Hall for inclusion in this post event blog. Oracle chose to do so this year. Their video is at the end of the blog.

This blog post highlights key findings and gives you access to participating vendor demos in both the BI-Bake-Off and the Show Floor Showdown sessions.

What Data Did We Use?

We use the Bake-Offs and the Show Floor Showdowns as a platform for data for good. This year’s topic was the UN’s Sustainable Development Goals. Thanks to our friends at the UN, we used their extensive sustainability data set as the base for this year’s demo. We have asked the vendors to answer some very important business questions related to sustainability, its impact on economic, environmental, and social outcomes.

The results were fascinating and in some cases counter intuitive regarding the economic, social and environmental impact of progress with sustainability.  Here are some notable findings and videos from participating vendors.

Microsoft, Qlik and Tableau were selected for this session because they are MQ leaders.

Microsoft chose to focus on access to electricity and CO2 emissions. Some of the key insights they found:

Here is the link to Microsoft’s BI Bake-Off video.

Here is the link to Qlik’s BI Bake-Off video.

Here are the links to Tableau’s BI Bake-Off videos.

Vendors in these sessions were randomly selected after they applied to participate based on either being covered in Gartner research or having a booth on the Gartner D&A Summit Exhibition floor.

Here is the link to Domo’s Show Floor Showdown video.

Here is the link to iGenius’s Show Floor Showdown video.

Key insights from LTI Lumin by Fosfor include:

Tellius focused their analysis on UN Sustainable Development Goal 8, which promotes inclusive growth and productivity as well as decent work opportunities around the world. Key insights identified include:

Here is the link to Tellius’s Show Floor Showdown video.

Key insights from ThoughtSpot include:

Here is the link to ThoughtSpot’s Show Floor Showdown video.

Vendors in the Exhibit Hall That Submitted Their Video

Key insights from Oracle include:

Here is the link to Oracle’s video based on the BI Bake-Off and Show Floor Showdown demo scripts and data.

Thank you to all our amazing BI Bake-Off and Show Floor Showdown panelists!! 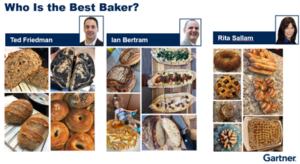