We just completed our first ever Virtual BI Bake-Off as part of our BuySmart webinar series. The Bake-Offs are fast-paced, informative sessions that let you see vendors side-by-side using scripted demos and a common data set in a controlled setting. We have been doing these BI Bake-off sessions – pioneered by our friend and colleague Cindi Howson –  in person at our D&A summits for the past 5 years– in fact they have been some of our most popular sessions. But alas like with everything, COVID has forced us to rethink, make changes, and to innovate.

For the vendors that participate in the Bake-Off, this is like an extreme sport. It’s a high stakes session where they put everything on the line in from of their arch competitors, revealing what’s coming and coveted sales tactics all while being judged by attendees. It takes a fair bit of preparation, extreme commitment, and an ability to shine under pressure. This blog post highlights key findings and gives you access to participating vendor demos.

If you are an end user Gartner client (no vendors allowed), you can access the replay of this session through your Gartner account here.

We try use the Bake-Offs as a platform for data for good. Rather than just using some solely fun data like football/ soccer statistics – go Mo Salah! – this year, we used population health data. Last year we did loneliness and happiness data. In past Bake-Offs, we have analyzed opioid epidemic data , traffic fatalities, college costs, and homelessness.

Now, we prepared this Bake-Off originally for our March 2020 D&A summits in Dallas and London – pre – global pandemic. The vendors had the option to supplement this data with COVID data and update their demos.

The results were very interesting and often heart wrenching in terms of global healthcare inequities.  Here are some notable findings and videos from participating vendors. Vendors were selected for the Bake-Off based on expressed interest by Gartner clients as represented by the number of inquiries for each vendor over the past 12 months. 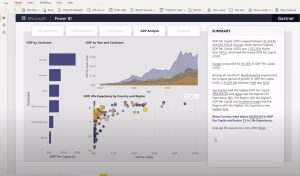 In terms of life expectancy, the US has lagged well behind the rest of the advanced countries in the study over the last several years despite having the highest per capita health care expenditures and health expenditures as % of GDP than any other country. Qlik found that one of the biggest correlating factors explaining life expectancy was rates of mortality from cardiovascular disease, cancer, diabetes or chronic respiratory disease. They found that Opioid use may be a contributing factor to the recent decrease in life expectancy within the US. They were able to identify geographic areas in the US that had high rates of opioid related deaths AND low life expectancy. For example, they were able to pinpoint physicians in Kentucky who were prescribing way more than the average amount of drugs being prescribed by other physicians in the eastern part of the state. They were able to determine that Kentucky lacked any counties with “high life expectancy”. 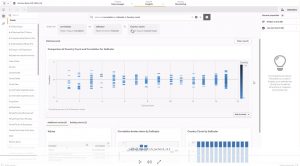 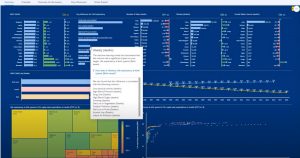 Tableau found that the prevalence of obesity is highly correlated with countries’ life expectancy rates. They also discovered that access to antiretroviral drugs is one of the most important factors for life expectancy in Europe, versus the tragic impact of deaths due to natural and semisynthetic opioids for the United States. 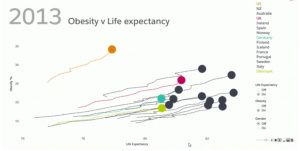 While we limited the Bake-Off to four vendors, we are highlighting videos below from vendors that were supposed to participate in our Show Floor Showdowns at Gartner’s Data and Analytics Summits in Dallas and London last March. These vendors were selected to participate based on random selection after an open application process. They created their demos using the same demo script and data sets as the Bake-Off.

Oracle also found that spending more government money on health expenditures does not automatically translate to longer life expectancy. For example, spending per capita has moderated over the last five years in Australia, New Zealand and Europe overall, yet life expectancy has continued to rise. This is not true in the US, where spending has risen steadily, but life expectancy has actually dropped. Oracle shared some of the most interesting findings of any vendor: Overall, women have a higher life expectancy than men – all vendors found this. But there is a bump if you reach the age of 60. If a person gets to age 60, their life expectancy increases relatively substantially compared to overall life expectancy rate. That “60 BUMP” – additional life expectancy–is higher for men than it is for women. Another interesting finding is that when mashing up population health data with freely available weather data, there is a clear correlation between higher level of precipitation and higher birthrates. The highest levels of precipitation in, for example, New Zealand, is correlated with higher birthrates. When it rains, it pours (babies)—at least in New Zealand!

YellowFin focused their findings on Australia since this was prepared for and delivered at Gartner’s D&A Summit in Sydney last February 2020 (pre-COVID). They looked at avoidable deaths and preventable hospitalizations in Australia and found that in the top 25 geographical areas for avoidable deaths, the first 5 came from the Northern Territory (NT). NT is a state with a sizeable indigenous population. YellowFin found that an overwhelming number of preventable hospitalizations come from people with chronic illnesses such as Chronic Obstructive Pulmonary Disease (COPD), congestive heart failure and diabetes. COPD is more common among Aboriginal and Torres Straight Islanders (the indigenous community). The rate of preventable hospitalizations from COPD is 3x higher in NT compared to the national AZ rate.

Thank you to all our amazing Virtual BI Bake-Off panelists! And thank you to our Show Floor Showdown vendors ThoughtSpot, Oracle and YellowFin for providing their demos for this blog!! 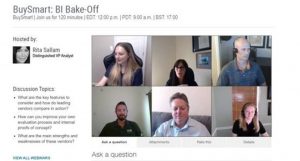 Don’t miss the Data Science and Machine Learning Bake-Off on September 15th at 1:pm EDT. To register and find the replay click here. Again only Gartner end user clients (no vendors allowed) can register and view the replay here. 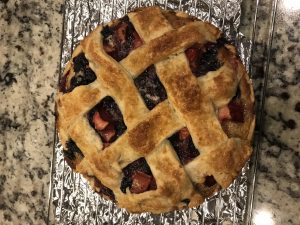 Disclaimer:  Data in these analyses are for demonstration purposes only and may not be statistically accurate if vendors did not apply weights to ensure data was representative of the total population.

Venture Capitalists Seek to Minimize Risk. So, Where Are All the Female- Led VC Funded Start-ups?