Everyone experiences rites of passage into adulthood. Sometimes it’s marriage, having a child, or just graduating from college where we mentally morph from idealistic, passionate, and carefree teenagers into responsible adults.  As a long-time observer and some would say that stern 1st grade teacher of Tableau since its early childhood, it is clear to me that Tableau has now put on its big girl pants – and Tableau 2016, its annual user conference, with more than 13,000 attendees was Tableau’s coming of age party.

While the classic user enthusiasm was still there with fan favs, such as ‘Devs on Stage’ where the developers themselves (notably 4 out of 5 of them females) introduced new features to a rousing crowd, the tone and energy level seemed a bit subdued compared to previous years. Perhaps because 20% of attendees self-identified as either in IT or Data and Analytics leadership roles – and, admittedly,, we are a more boring bunch. More likely, though, it’s because Tableau deployments are becoming serious mission critical business for many Tableau customers. Tableau also has a new, professional CEO, Adam Selipsky formerly number two at Amazon AWS, who kicked off the event. It was clear that Adam has a serious mission to lead Tableau into the post $1 Billion in revenue realm of great companies. His plans are to leverage Tableau’s large installed base to:

We also learned a lot about Tableau’s roadmap for the next 12 to 24 months in the main keynote from fan favorites, Christian Chabot, founder and now Chairman of the Board, Francois Ajenstat, Chief Product Officer, Andrew Beers, Chief Development Officer and Dan Jewett, VP of Product Management.

The vision revealed in the keynote had an unmistakable emphasis on the enterprise, but as the market for visual-based data discovery is mainstreaming, Tableau also laid a foundation for building a next generation, ‘smart’ BIA platform. 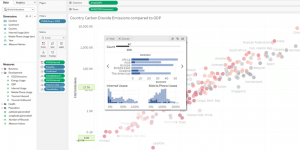 While Gartner may be off by two or so years, this next wave of disruption has begun. It’s happening. And like the visual-based exploration wave before it, those vendors not on board will be marginalized. With the addition of Hyper, Project Maestro, NLP-based exploration, instant insights and recommendations to its roadmap, Tableau is positioning itself to ride this next wave – at enterprise scale and with trust and governance. Only execution remains, which is non-trivial in an increasingly crowded market.

Venture Capitalists Seek to Minimize Risk. So, Where Are All the Female- Led VC Funded Start-ups?