Supplier relations can be fickle. If you plot them on a line chart over time,  you’d typically see a fluctuating curve, with periodic ups and downs.

One such barometer in the U.S. is provided by the annual North American Automotive OEM-Tier 1 Supplier Working Relations Index, which for the past 18 years has surveyed suppliers about the state of their relationships with Detroit’s Big Three (Ford, General Motors and Chrysler – now Fiat Chrysler Automobiles, FCA) and the Japanese giants (Toyota, Honda and Nissan).

In 2017, the main story was GM’s growing status among its supply base. The headline this year is that overall ratings for five of the six have dropped, with Nissan seemingly in freefall to an all-time low score in the study’s history (see chart below). 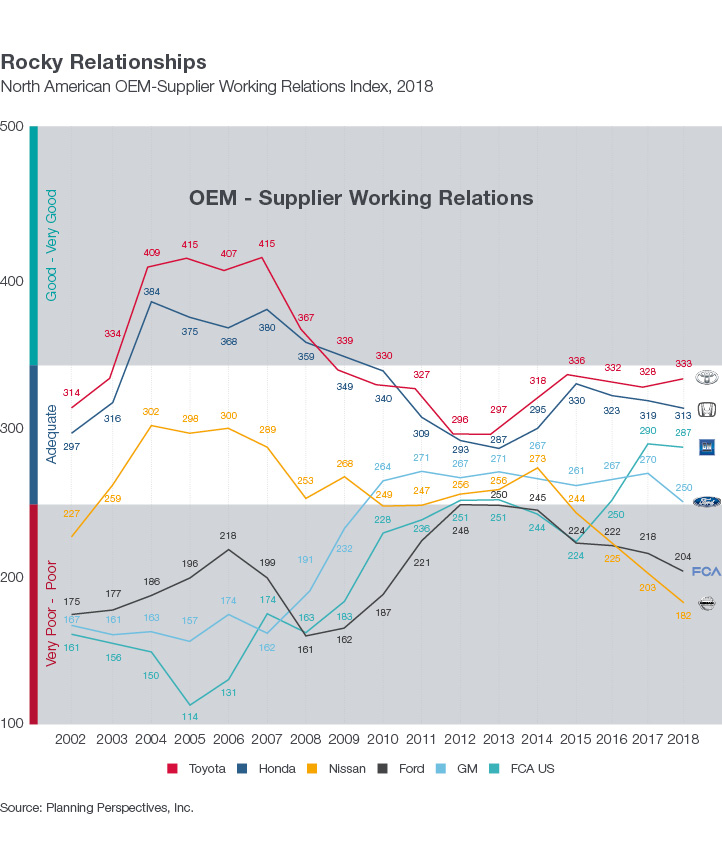 Why does this matter? Analysis of the data by the study’s creator, Dr. John Henke, suggests that each index point drop directly equates to a reduction in profit per vehicle – totalling tens or even hundreds of millions for each OEM. (Henke plans to publish more details on this financial impact later in the year.)

Conversely, the stronger the relationship, the more benefits OEMs can expect from suppliers, not only in terms of better pricing, but also faster problem-solving and earlier access to technology and innovation.

In 2018, Nissan received the lowest total benefits from its suppliers, despite exerting the most pressure on them to reduce prices. At a conference I attended this year, a senior Nissan executive acknowledged that the company takes a traditional cost-out approach to suppliers, and was “a little bit limited” and “not leading edge” in its approach to long-term relationships, co-development and innovation.

Challenging the “Not Invented Here” Syndrome

In an industry facing significant disruption and powerful new competitors, declining supplier relationships isn’t a good thing. But a reliance on internal R&D for new products and innovative features is not something that’s confined to Nissan or, indeed, the wider auto industry. The “not invented here” syndrome remains an all-too-common malaise in many companies and sectors.

Recognizing this as a constraint on future business success is the first step in developing an “open innovation” culture – one that actively seeks supplier ideas and their involvement in the product development process. Research conducted by Boston Consulting Group found that “strong innovators” are three times more likely than “weak innovators” to draw on supplier ideas and expertise to fuel growth.

Two examples presented at last month’s Gartner Supply Chain Executive Conference in Phoenix, Arizona, underline how this can produce rapid benefits. Kevin Twohy, Strategic Sourcing Director at 3M, explained that his company spent more than 12 years trying to figure out why alternative raw materials used in its box-sealing tape gave off a nasty smell. Inviting a resin supplier into the conversation enabled a solution – avoiding a particular antioxidant — in just 10 minutes.

A key factor to this faster, more cost-efficient innovation is to connect technical experts in engineering, quality, manufacturing and R&D directly with their counterparts at the supplier, rather than trying to control the relationship via account managers. This approach breaks down barriers, builds trust and fosters a different way of thinking.

A close working relationship and shared goals between the sourcing and R&D organizations, as well as with external partners, is essential for this kind of rapid product development to succeed, as evidenced in the following graphic.: 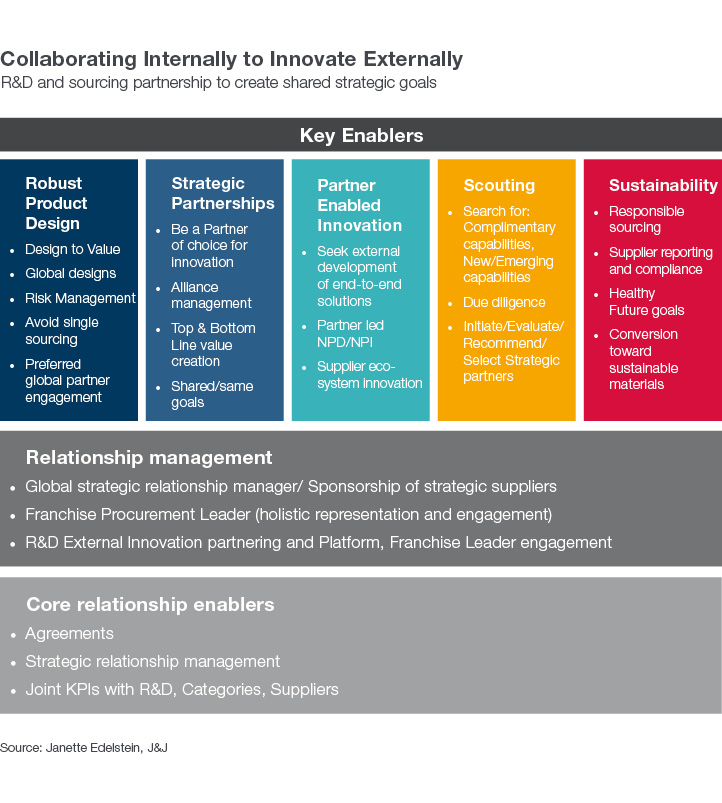 One message from Henke’s latest research and these practitioner stories is that the tendency to see cost-cutting and supplier relationship management (SRM) as competing initiatives – as one of our automotive community members relayed it to me last week – is ill advised. Done right, collaboration can remove cost from the supply chain and the innovation process.

Expecting SRM trend lines to smooth out completely in the next few years is probably asking too much. However, endorsing open innovation should ensure that they arc upwards more consistently than in the past.

Back to the Future of Work