If certainty is the foundation for business confidence and growth, then 2018 has been a particularly rocky year. United States-imposed tariffs, a trade war with China, and Britain’s chaotic efforts to break away from the European Union have shaken the established ground rules upon which global supply chains have been built over many years.

Supply chain professionals have certainly felt the impact. SCM World’s annual Future of Supply Chain survey, completed in mid-October, found that regulatory issues such as trade policy and tariffs were ranked as the second highest category of risk after cyberattacks — up from fifth place in 2017.

More than a third of executives (36%) said they were “very concerned” about these risks as they looked ahead to 2019, compared with 27% last year. Almost half were “somewhat concerned.” 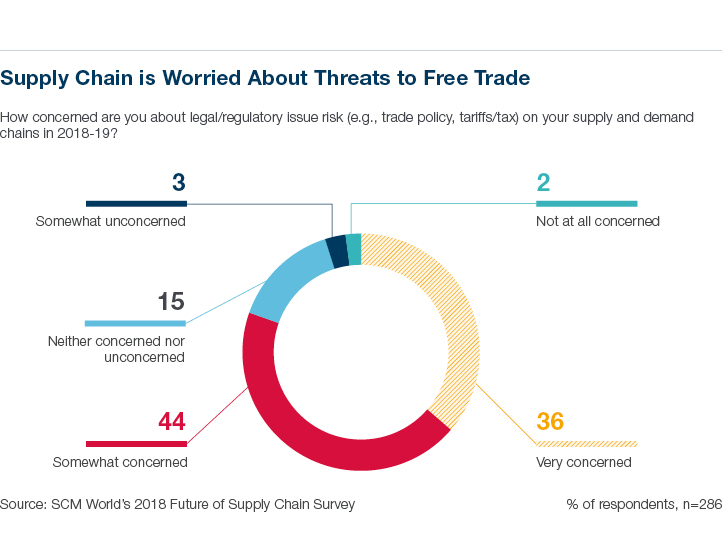 For those based in the United Kingdom and Europe, Brexit tops the uncertainty stakes right now. Heated arguments within the British government and Parliament about the terms of Britain’s withdrawal from the EU appear to have increased the odds of a no-deal situation come March 29, 2019.

That scares the hell out of companies operating across the UK and continental borders. They fear increased costs, delays to shipments of parts, materials and products, as well as a lack of clarity around quality standards and other regulations.

Proactive companies have been planning for a worst-case scenario for some time. One pharmaceutical supply chain executive I chatted with at a Christmas drinks reception recently told me his firm started this process as soon as the referendum result was announced in June 2016.

Stockpiling drugs and medicines is one of the main strategies deployed. Indeed, as a major purchaser via the National Health Service, the British government has called on firms in the sector to hold at least six weeks’ worth of supplies as part of their contingency plans.

UK supermarkets, along with manufacturers such as Airbus and Volkswagen, are reported to be taking similar action, although there are clearly limits to how much stock can be accumulated. A shortage of warehouse space, especially for chilled and frozen products, is not making this task any easier.

More drastic action, such as switching suppliers or moving production sites into or out of the UK, appears to be limited so far, with most companies waiting to see how the Brexit process plays out before committing significant resources.

That is understandable. But one thing they absolutely should do, as my colleague Tom Enright noted in a recent blog, is to make sure they understand where UK or European suppliers are used within their multi-tier supply chains.

Dialogue with external partners is the key to gaining this visibility and then exploring alternative supply options. Our research found that this was the most popular response to trade uncertainty more generally (see chart below). 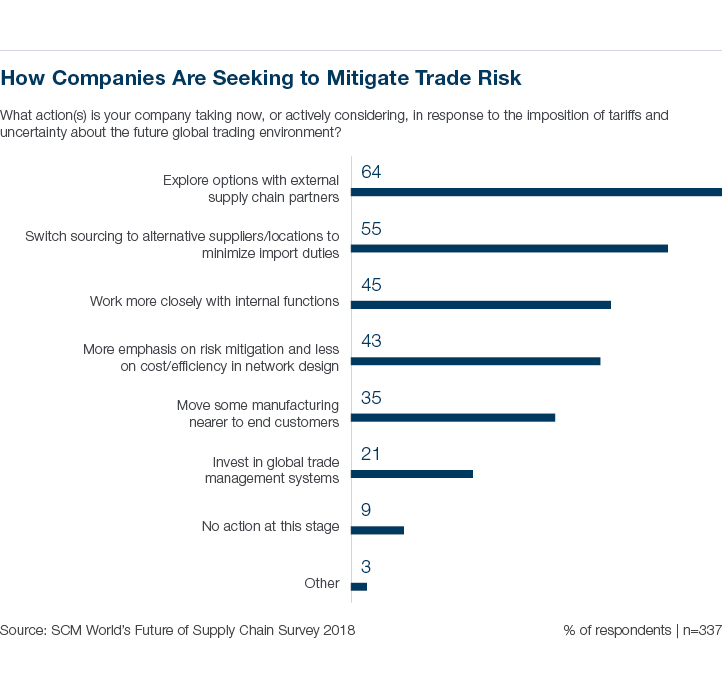 Tit-for-tat tariffs on a growing range of products between the U.S. and China in recent months have raised costs for companies trading between the world’s two biggest economies. But in some cases, such as the automotive industry, they have also called into question the economic logic of making products in one country for export to the other.

The recent announcement by the Chinese government that it would lower tariffs on cars imported from the U.S. from 40% to 15% is therefore welcome news for American automakers, as well as for European firms such as BMW and Daimler with big manufacturing operations there.

A potentially more serious issue with longer-term implications, at least from a sourcing perspective, is the U.S. government’s attempt to halt the growing influence of Chinese telecommunications and technology companies.

In August, it passed an act that bans government agencies and contractors from using many of Huawei and ZTE’s products, citing national (cyber)security concerns. It is also lobbying European and other countries to take similar steps.

The Australian and New Zealand governments have already excluded Huawei from supplying their 5G infrastructure, while the UK’s main telecom provider, BT, says it is stripping out the firm’s equipment from existing 4G and 3G networks.

At the same time, the U.S. government has moved to stop American suppliers from selling components to Chinese firms such as chipmaker Fujian Jinhua, which is accused of stealing trade secrets.

This technology cold war looks set to outlast the current trade war, impacting companies on both sides of the “silicon curtain.”

Add this to the prospect of a disorderly Brexit, not to mention the threat of a global recession, and it doesn’t appear that 2019 will be any smoother a ride.

Supply Chain as a Service: Three Types and Three Opportunities

Whether Digital or Traditional, They Are All Freight Forwarders to Me

Learn the main strategies that supply chain leaders use to...