How susceptible are procurement jobs to automation? It’s a question I’ve been pondering in recent weeks while researching a new report on the digitalization of upstream supply chain operations. The short answer is: pretty susceptible. But I think it’s going to take quite a long time – probably more than a decade – for technology to start to displace significant numbers of sourcing staff.

The storyline is familiar by now – a new generation of robotics continues to automate manufacturing work. In turn, the ability to crunch massive amounts of data and use smart algorithms to make sense of that data means that tasks once considered the exclusive preserve of humans (like driving, for example) are increasingly going to be performed by artificially intelligent systems.

Several academic studies have popularized this narrative. The 2011 book Race Against the Machine, by MIT’s Erik Brynjolfsson and Andrew McAfee, argued that accelerating technological innovation meant that a wide range of cognitive tasks, both routine and non-routine, could be automated. Two years later, Oxford University dons Carl Benedikt Frey and Michael Osborne published an influential research paper suggesting that almost half of American jobs – blue collar and white collar – are at a high risk of being computerized.

SCM World’s Future of Supply Chain study (2016) found that a majority of procurement executives believe that the technologies powering this digital revolution, including big data analytics, machine learning and the Internet of Things, are “disruptive and important” for their organizations (see chart). But exactly how they will impact sourcing and procurement activities, not only in supplementing them but also potentially in replacing some, is less clear. 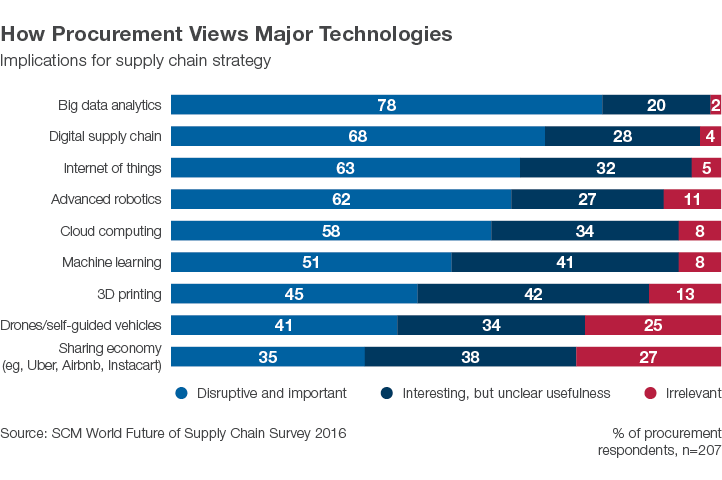 A recent analysis by McKinsey consultants Kalit Jain and Ed Woodcock predicts that by 2021, analytics-based sourcing systems will identify a group of potential suppliers, draw up and send an RFQ, score their responses and create a list of negotiating points. Once a contract is signed, the system will monitor supplier performance and trigger corrective actions if cost, quality or delivery KPIs are missed. Humans get involved only if a supplier fails to get back on track, triggering an alert for human intervention.

In the shorter term, McKinsey concludes that 56% of source-to-pay tasks could be “fully or largely automated using currently available technologies.” Transactional activities such as order placement and payment processing are the most obvious candidates, of course, but they also identify sizeable chunks of supplier management, selection and negotiation, and even category strategy (see chart). 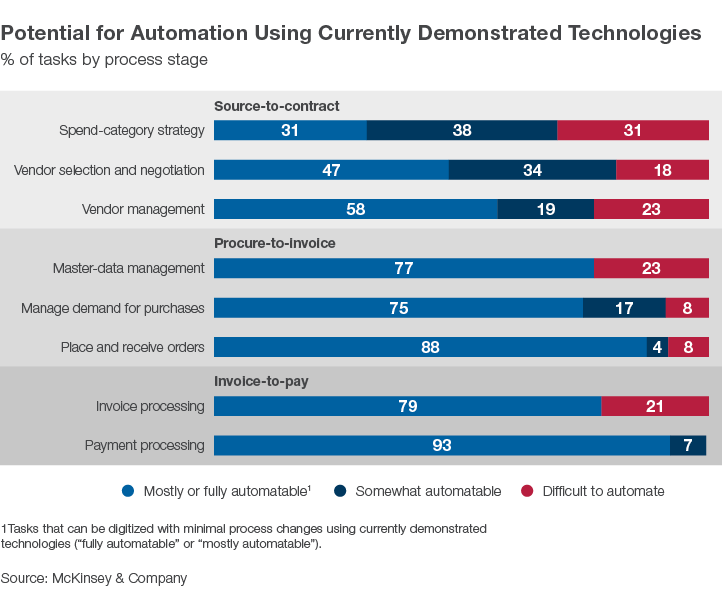 Five emerging technologies will increase the amount of procurement work that can be automated:

Together, these developments promise to make procurement faster, more efficient, cheaper – and leaner. While the “Organization of One” envisaged by Accenture in its wide-ranging report on the future of procurement may be overstating things, it’s hard to see the number of people working in the function increasing over the next few years.

Indeed, the Oxford study mentioned earlier assigns a probability of 98% to “procurement clerks” and 77% to “purchasing agents” being automated, compared with a relatively modest 30% for “purchasing managers.”

Still Focused on the Foundations

Authors Frey and Osborne were careful, however, not to speculate about the number of jobs that might be lost or the timeframe involved. And if they’d attended the SAP Ariba Live user conference in Prague with me last month, they would certainly have felt vindicated in their decision when it comes to procurement.

Despite plenty of talk about end-to-end visibility and real-time monitoring (the subject of my report published in June), augmented category sourcing, predictive pricing and cognitive contract management, I was struck by how many companies are still trying to build the foundations of digital procurement – collecting spend data, getting users to buy through online tools, running e-auctions, paying bills electronically, and so on.

An excellent report on the prospects for artificial intelligence in procurement co-authored by fellow Gartner analyst Magnus Bergfors notes that the adoption of technologies that have been around for many years is still painfully slow. Not surprisingly, perhaps, it forecasts that by 2020 just 10% of the potential market for smart machine technology will have been addressed.

Make no mistake, digitalization is going to have profound (and mostly positive) effects on the sourcing and procurement process. But, as with the e-commerce boom of the early 2000s, it’s not going to happen as quickly as many believe.

In the meantime, my advice to those in the early to middle stages of their procurement careers is to focus as much as possible on tasks that require creative problem solving, strategic collaboration and what Frey and Osborne call “social intelligence” – negotiation to reconcile differences, for example, or persuading others to change their minds and/or their behavior.

While there’s no absolute guarantee that these advanced human skills will be immune from future waves of automation, they look like a much safer bet today.

When the Chips Are Down, Step Up