Two years ago I wrote a blog post in this series asking what impact automation might have on procurement activities and jobs. My conclusion: “Digitalization is going to have profound (and mostly positive) effects on the sourcing and procurement process. But, as with the e-commerce boom of the early 2000s, it’s not going to happen as quickly as many believe.”

I stand by this statement. Many organizations are still primarily focused on core IT applications and systems, and on building more solid data foundations, rather than radical transformation. However, recent conversations with functional leaders for a new report, and at a conference on digital procurement, have brought home to me how the use of automation technologies by early adopters is already beginning to change sourcing roles.

Research we conducted last year found that almost half of supply chain professionals believed that by 2025 procurement automation would extend beyond routine tasks and processes, such as executing purchase orders (see chart). More than 500 of them anticipated that this could mean systems running entire parts of the sourcing process —creating requests for proposals (RFPs), sending them to suppliers, rating their suitability, and so on. This would leave people to manage exceptions, such as handling more complex sourcing events or investigating subpar supplier performance. 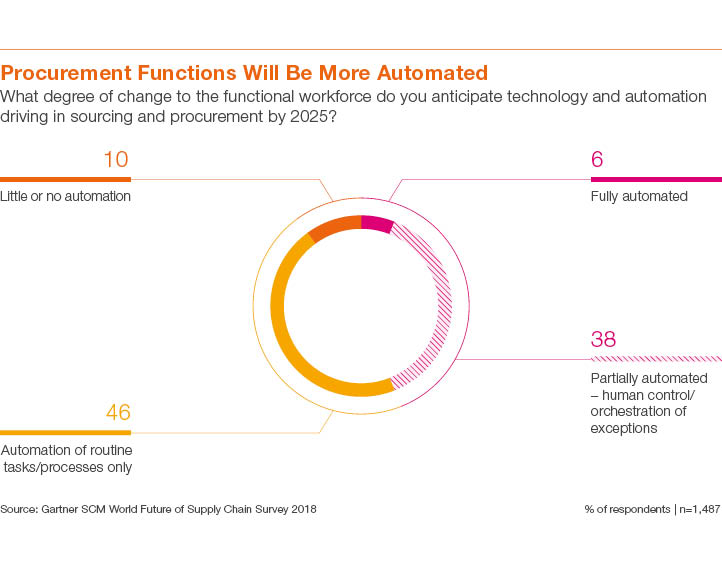 But he also argued that automation was needed to make the procurement process faster and more efficient. Slow cycle times and hard-to-understand procedures frustrated business stakeholders. “We take too long. We cost too much,” he told his audience. “A lot of our procurement teams want to negotiate forever. Our clients want decisions taken quickly.”

Examples of procurement automation here in Europe include the following:

As these initiatives and others like them progress, it is likely that price negotiations, at least for tactical purchases, will follow the path of Wall Street trading systems, where algorithms rather than humans execute stock-market transactions in a largely autonomous way.

Buying in to Future Roles

Although this future state will generally be positive news for procurement organizations and the stakeholders they serve, it inevitably means change and upheaval in the medium term. Speaking at the Amsterdam conference, Michelle Baker, CPO of the Dutch telecoms company KPN, said she saw 50-70% of procurement activities being automated in the next five to 10 years. Why? “It’s cheaper to use a 24-hour bot than a sourcing person.”

While many operational and lower-level buying roles are set to disappear, new jobs are already emerging. Maersk, which expects operational roles to fall from 29% to 9% of its global procurement team, recently appointed a “virtual workforce manager.” Their job is to monitor the performance of its Holger robots and work with algorithm developers and other technical staff to improve it. 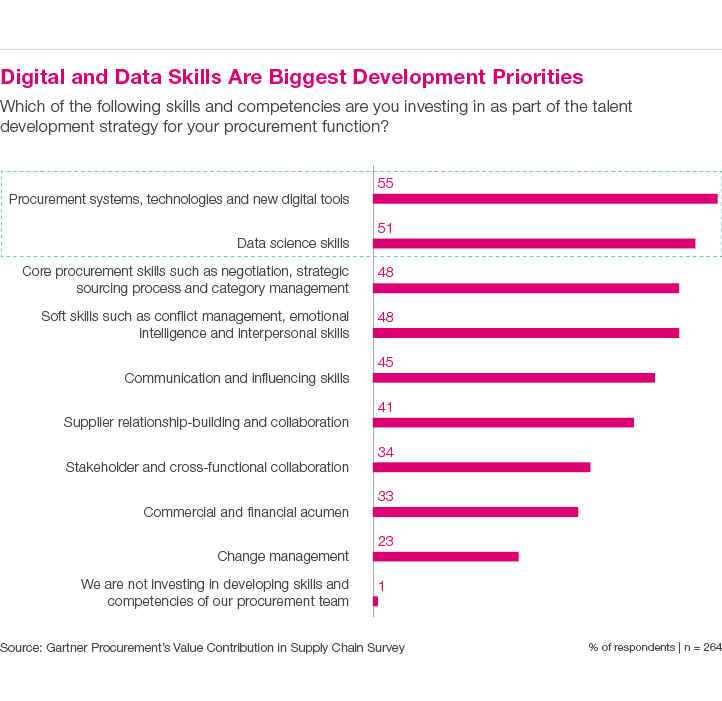 CPOs and their HR partners will also need to rethink and redesign competency profiles. Strategic buyers will need to be conversant with analytics, comfortable with predictions and probabilities, and willing to make faster decisions even when faced with incomplete information, among other things.

Functional leaders must also invest in change management and communications to secure cultural acceptance of automation and other advanced technologies. Procurement staff need to understand where digitalization is going and buy in to a future vision of how it will support them in delivering greater value to their businesses.

As Sebastian Kahlmeyer, senior vice president of digitalization and data management in Siemens’ corporate procurement group, put it in Amsterdam: “They have to understand that this is not a story of fear, it’s a story of hope. You need to take the time to explain that story very solidly.”

An Ancient Solution to a Digital Problem

Supply Chain Gridlock 101: How to Explain It to Your Family and Friends

The Supply Chain Gridlock: Partner With Your Suppliers Now to Mitigate Risks for the Future

Reinvent the Future of Work for Supply Chain

Find out how leading supply chain organizations are building a...

Bayer supply chain has been following 3 unconventional tactics to...