Groups of youngsters and adults alike have been spotted gathering in unusual places, eyes glued to their smartphones. They’re looking for something: little monsters called Pokémon. Unlike our own childhood memories, these treasures aren’t real; they’re in digital 3D.

Customer engagement is the obvious application

This can be seen in a number of examples. First up, IKEA offers an augmented reality catalogue that enables its customers to superimpose digital furniture on real houses. Also, Heineken already has augmented reality packaging, which gives consumers a glance at the sustainability stories behind the beer’s ingredients by simply scanning the bottle’s label with an app on your smartphone.

This can also be seen at the construction equipment manufacturer, Case Construction, which has an app that scans its printed leaflets to display detailed 3D models of construction parts and equipment.

In the retail space, American Apparel has developed an in-store app that reveals information on its products, offers customer reviews and allows the customer to buy the product online if it’s out of stock at the shop.

Smart manufacturing is where value is

However, augmented reality is about much more than just marketing and consumer interactions. Rapid technology developments, most notably in lenses, enable augmented reality applications in business environments, such as in operations.

A great example of this comes from Siemens. The powerful combination of 3D visualisation and simulation technologies with manufacturing execution means companies can combine physical products with their digital counterparts. Siemens partnered with Microsoft to integrate its smartglasses, HoloLens, which enable plant-floor operators to visualise 3D representations of new products and their instructions. I had the opportunity to see this live and it’s impressive – a 3D digital object appears before you as “rock solid”.

The demonstration showed a plant-floor operator interacting with a digital product. HoloLens enabled him to see the virtual object exactly as if it were physically there. It also responds to natural commands, so, when the operator moved sideways, he could see the virtual product laterally; by moving a little bit closer, he could see more detail; or by blinking an eye he could remove its cover and explore inside. A video of how HoloLens and Siemens work together is available on this blog on the Siemens PLM Community.

The business case that Siemens showcased relates to new product introduction and in particular the industrialisation phase of new hi-tech equipment. Operators can experience the new product before it’s built, which means that they can test it, simulate assembly instruction and spot any ergonomic challenges before it’s actually manufactured.

With more interest from users, the augmented reality glasses market is heating up, with a number of emerging start-ups leading the way and large tech companies including Facebook, Microsoft and Apple making huge investments.

The technology behind these lenses is much more complex than virtual reality glasses. Augmented reality works by tricking your brain into thinking the 3D virtual object is superimposed on to reality. It’s about getting the light reflections at the exact angle as you move around the virtual object, so that your brain think it’s real.

Magic Leap is considered the most innovative start-up in this field. It has the most advanced technology and it’s attracting lots of investment: to date, investors have funnelled $1.4 billion into it. However, the company has never released a product or a prototype.

Daqri is a relatively new entrant into the augmented reality arena, with a strong focus on operational applications through its industrial grade helmet, especially designed for the plant floor and to support smart manufacturing.

Among the technology majors, Microsoft recently surprised the market with its augmented reality HoloLens, which is already available in pre-production and is attracting a number of developers to create applications for it.

Users are beginning to understand the business case

The interest from our community in augmented reality is also increasing. In our report from 2014, The Digital Factory: Game-Changing Technologies That Will Transform Manufacturing Industry, and well before any commercial augmented reality product was available, it emerged that the majority of respondents thought that this technology would change the way manufacturing operations are managed in the future. Also, that more than 20% of organisations were currently using, piloting or soon planning to invest in virtual reality to make their factory networks smarter. 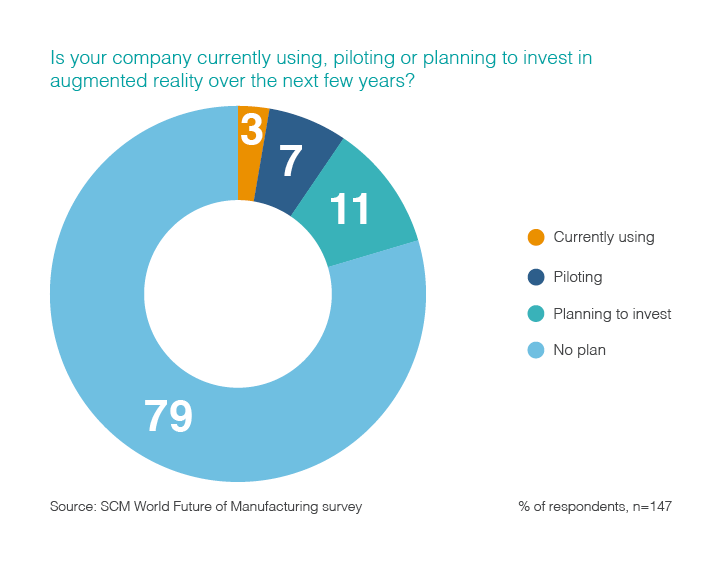 I think we’re on the verge of a revolution, where augmented reality will streamline and optimise a number of operational processes that today require expensive physical products or prototypes. The blurring of boundaries between physical and digital products will encompass more going forward, from customer and consumer involvement in product design to virtual focus groups, new product engineering to product introduction, and maintenance to aftermarket services.

This is another technology development to watch carefully.

Are Data Intelligence Tools Part of the New Normal?

The Myth of Supply Chain and Manufacturing Operations Alignment