We are seeing the spectacular sales growth of BEVs (battery electric vehicles – no combustion engine) and PHEVs (plug-in hybrid electric vehicles) in Europe, followed by a similar boom in China that started some years back. EVs are selling not because consumers finally embraced sustainability as a religion, but because manufacturers are threatened with massive fines if they don’t sell enough of these. Tax breaks and financial incentives are an extra sweetener that helps convincing a growing number of consumers. EV advocates were quick to sing victory and declare ICE as dead.

As the EU and the UK set a clear date for the end of ICE (internal combustion engine) sales, all seems like a done deal. However, this may be a major oversight. The EV value proposition (talking BEVs) is still far from enchanting the vast majority of Europeans. This must not be ignored by government and industry – doing so will bring deceit to consumers, which may end in a public backlash. If EVs haven’t won the almost entirety of consumers by 2030 (UK) or 2035 (EU), this may push the deadline for ICEs by several years until, hopefully one day, governments and industry get things right. Alternatively, if governments insist on those deadlines, it may drive passenger car sales dramatically. For instance, Renault – despite being a top EV seller – is seeking to extend EU’s ICE ban which is indicative. As such, effectively, we are now in a race against time to make BEVs work for the vast majority of car buyers.

It all starts by understanding human behavior

BEVs will only prevail if they adapt to the way how car buyers think and their lifestyle:

Trying to educate consumers or forcing them to do something is futile. If the technology does not adapt to their needs, then it can’t succeed. Let’s now look at the different areas that must be tackled for EVs to win over the vast majority of our society.

It’s clear for most there is still a huge shortage of chargers – and yes, even for those that drive just 20 km per day, simply because one day they will drive more than that and fear what will happen. Several chargers have a tendency to be down (as VW’s CEO recently expressed in a rant). Also user discipline is low, with many simply hogging chargers or ICE drivers simply blocking charger car parks. This means not only many more chargers are needed, but also mechanisms must be created to ensure a fair use of those.

Then comes location. We are not short of examples of companies or even governments taking action to put chargers in places that don’t matter whatsoever. Chargers need to be available in places that are compatible with people’s routine – this means places where they regularly need to spend a fair amount of time as part of their routine. This means:

Even with all regulatory and financial support given to EVs in Europe, this is still a car for the affluent. Never mind that on average an EV is 41% more expensive than an ICE even after incentives (September 2021, EU, source: JATO). There is also a clear geographic divide between rich and poor countries, with those of central and northern Europe showing reasonably higher EV penetration than south and east. Besides, if you are not rich enough to have a house with your own parking spot and charger, then this will significantly affect your EV’s TCO – using a public charger can be a very expensive proposition, especially a fast charger.  For instance, the electricity price/km for a Tesla Model 3 SR+ (when charged at Innogy Germany) is 44% higher than the diesel price/km for a BMW 320d (also in Germany) – using WLTP consumption figures. The comparison uses fast charging as this is fairest given the very low time it takes to refuel a diesel car.

EV maintenance also presents some cost challenges. Even that EVs require less maintenance interventions than ICEs, battery durability is still a concern. For instance, as VW publicly claims the durability of its EV battery to be 350,000km, the truth is that a reliable ICE can last a lot longer without changing engine and gearbox. Even if EVs are covered by longer warranties, EV owners replacing a battery outside warranty stand to pay a hefty bill. For entry-level EVs, the invoice could be above the car’s residual value. EV drivers making frequent use of fast charging will see their battery life shrink even faster. Even if this doesn’t mean all EV batteries will last only 350,000 km, the truth is that an inferior durability comparatively to an ICE is a caveat for many vehicle owners.

To make matters worse, how long will governments be able to sustain EV subsidies and tax breaks is the key question – especially given the massive burden COVID-19 has been to the public budget. European governments make a substantial revenue from fuel taxation and road tax – it would be naïve to think EVs will remain impervious to taxation for a lot longer.

Driving range is still a problem

Let’s start by saying EV driving range has been clearly improving in the top segments – with Lucid Air, Tesla Model S Plaid and Mercedes EQS being good examples of that. Sadly, these cars are beyond the majority’s purchasing power. As on paper most EVs don’t evidence a great range compared to ICEs, reality is even worse as their real-world energy consumption is very influenced by particular factors like low temperature and motorway speeds. For instance, as shown in the table below, several EVs present a dramatically low driving range in motorway (70 mph – 112 km/h). 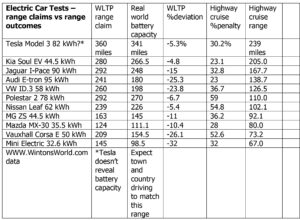 Buying an EV that can’t do much more than 100 km on motorway (at speeds below 120 km/h) is a major disappointment for many customers. Their expectations are set by what ICEs can do and the gap is major, especially in cold weather.

Recommendation: OEMs must put behind the temptation of selling ‘compliance’ BEVs – cars with ICE-shared platforms and laggard technology. On the short term, these are great to tick the box and evidence a EV portfolio. However, convincing customers to buy these cars is a long-term gamble, as these customers may not come back to EVs so soon.

The truth is that there are EV vs ICE carbon footprint comparative studies for all tastes, even that EVs lead over ICEs in the vast majority of situations. However, carbon footprint lifecycle assessments can vary greatly according to the conditions surrounding EV usage. Some examples:

BEVs are the future – no doubt about it. However, the path to full electrification is still long and full of obstacles. Governments, press, industry, public opinion in general have the duty to highlight main roadblocks and work together to solve them effectively. This text provides several recommendations that can enable full electrification by 2030-2035 in Europe. However, it will take major cooperation and vision from all parties to achieve this goal.

The Auto Sector After the Microchip Shortage – a Long-term View