Question: What do Cloud Computing, pervasive mobility, and TV white space have to do with each other?  Answer: Read this blog post and find out!

Virtually every customer conversation that I have these days is centered on the topic of mobility. Enterprise users want to communicate and collaborate anytime, anywhere, using any device. Most of my conversations focus on mobile device management, information security, and application architecture. Rarely does someone ask me about the wireless network. They just presume that wireless is everywhere and it “just works”.

Although I don’t cover cloud computing, I feel the influence of cloud computing everyday as I talk to customers, analysts, and vendors. Invariably, cloud computing is discussed in virtually every conversation that I have. This should not be surprising given the fact that, for most enterprise users, they will access the cloud using a mobile device. But again, when I talk with other folks about cloud computing, no one ever asks me about the wireless network.

By now you’re probably getting the impression that I am interested in the wireless network.  I am.  Wireless network performance, availability, and predictability will directly impact the experience of a mobile user accessing cloud computing services.

For instance, a user trying to download large files from the cloud to their iPad via an overloaded mobile cellular site may experience very long download times.   Similarly, a video web conference hosted in the cloud, that communicates with users connected to a poorly designed wireless LAN may experience degraded video and audio quality.

The need for more wireless spectrum

Many of you have probably read about the problems that AT&T experienced when iPhone users began to overload the AT&T 3G cellular network (See http://nyti.ms/f3Nlwz).  AT&T, Verizon Wireless, and many other operators have invested billions of dollars to upgrade their radio access network and their backhaul facilities.  But that is not going to be enough.  They will need more wireless spectrum.

This is because mobile cellular usage is increasing more quickly than operators can upgrade cell towers and backhaul facilities.  No longer is 3G cellular service good enough, users want 4G. The situation is analogous to adding memory to a personal computer.  The more memory you have, the more you use.   Cisco’s report “Hyperconnectivity and the Approaching Zettabyte Era” (see http://bit.ly/huwP4t) attempts to quantify that growth.  In that report, they make the case that global mobile IP traffic will grow at a CAGR of 108% from 2009-2014.  You just need to look at the shape of the curve to see what I am talking about. 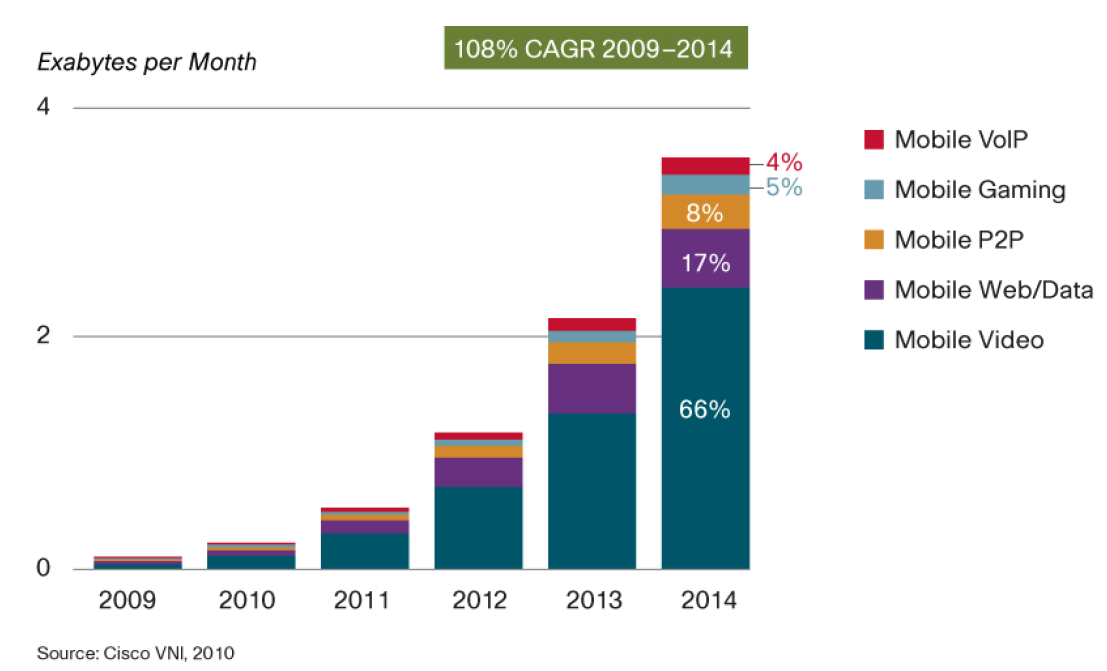 I am not the only person to recognize the need for more wireless spectrum. In 2010, the Federal Communications Commission (FCC) released America’s first national broadband plan (see http://www.broadband.gov/plan/).  In that plan, they stressed the need to (a) make 500 MHz of new spectrum available, and (b) expand opportunities for innovative spectrum access models.  Later that year, in October 2010, the FCC released another report stating that “the broadband spectrum deficit is likely to approach 300 MHz by 2014” (see http://bit.ly/9FxJ7w).

So, what does all this have to do with TV white space?  Well, TV white space represents the first significant increase in unlicensed spectrum below 5 GHz in over 20 years.  According to the FCC, it has the potential to provide:

Some have referred to the TV white space initiative as an opportunity to provide “super Wi-Fi”, or “Wi-Fi on steroids”.  But in actuality, it has nothing to do with Wi-Fi.  It is all about spectrum usage.

The TV white space initiative makes available 300 MHz of wireless spectrum for new products and services.   What is also interesting here, aside from the new access to wireless spectrum, is that a TVBD can share the spectrum with other wireless transmitters.  For example, medical telemetry equipment is permitted to operate on any vacant TV channel in the range 7 – 46. These are the same channels that a TVBD can use. How is this possible?

The other important point to make is that the low frequency bands (VHF and UHF) have much better propagation characteristics than higher frequency spectrum.  So, the TV white space spectrum will make it easier for mobile operators to provide in-building cellular coverage. In addition, better propagation means that it will be less costly for mobile operators to cover large rural areas.  Lastly, we are likely to see lots of new and innovative mobile broadband services because the barrier to entry of creating a broadband service using TV white spaces is low due to the fact that the spectrum is unlicensed. In contrast, licensed spectrum can cost billions of dollars.

Mobile access to cloud computing relies upon wireless networks.  These networks must provide sufficient performance, availability, and predictability in order for users to have a satisfactory experience, and will require additional spectrum due to the rapid growth in mobile traffic. Initiatives like TV white spaces will become increasingly important to satisfy the growing demand for more wireless spectrum.

In my next post, I’ll talk more about the TV White Space initiative, dynamic spectrum sharing, and future trends in wireless communication.