The Tesla Model 3 was unveiled a few days ago.  There are already over 250,000 people plopping down $1,000 deposits to reserve a product they haven’t physically seen or touched yet.  This reminds me of those Apple frenzies regarding iPhone launches.  What could be so interesting and disruptive that rational people would do something like this?   My recycled answer comes from Elon Musk in this book by Ashlee Vance:  “Good ideas are crazy until they are not.”

Last year, some Model S drivers drove from LA to NYC in 57 hours and 48 minutes , leveraging the semi-autonomous and “auto-pilot” driving feature 96% of the time. Regardless of the time or context of the claim, the role of the driver has been changed forever.  Just a few years ago, the prospect of a car driving that far without an accident was “ludicrous”… or even borderline “insane”  (puns intended).  In a few years, most drivers will expect that all cars have ‘autopilot-like’ features. By 2022 in the U.S., automatic emergency braking will be standard for new cars.

While some of Tesla’s technology is new, most of it is based on existing technology that has been adapted or updated, or the processes have been dynamically combined to create something new.   Similar to some impactful Apple products, the underlying technology has been repackaged for a better user experience.   We had sensors, motors, batteries, vision systems, and analytics before.  Your iPhones have been self-updating with new operating systems since 2007.  Planes have basically landed themselves for the last 15 years….  The military has had “fire and forget” missiles since the ‘70s.

A few months ago, a pharma CIO asked us to help paint a picture for the future of clinical trials.  Together, we imagined a future that leverages sensors, companion devices, connected infrastructures, etc. (smart scale, sleep sensor, wrist-sensors, smart pill bottles, home social robots, to name a few).  Below is a snapshot of the latest Gartner digital “business moment” for clinical trials ( G00281135).   All the technology mentioned in this note exists today. It simply needs to be recombined. However, piecing together all the technology elements, data, sharing, and processes is complicated, but nowhere near as difficult as dealing with the “ludicrous” and “insane” challenges with internal pharma regulatory and legal groups.  With the majority of the technology components already here today, we need some visionaries to run with it. After a few successes, pharma executives will soon expect all clinical trials to have major remote components. After the Model 3, it doesn’t seem crazy anymore, does it? 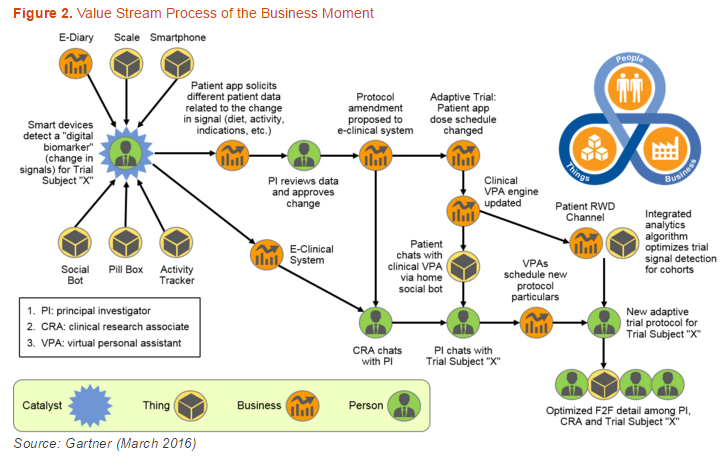 This Internet of Lab Things – Io(L)T – will be sweet