A recent survey by Partners for Automated Vehicle Education (PAVE) showed that 48% of 1,200 Americans polled would never get in an autonomous robot taxi.

That lines up with a survey Gartner did 3 years ago. The new survey does show a bit of improvement, however. Attitudes from the “no way” contingent haven’t moved very much, but who cares about those folks? 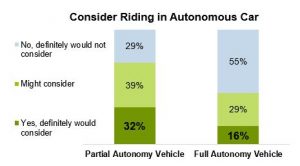 Results of 1,500 people polled in the U.S. and Germany

The PAVE survey said 18% of people would be eager to get in an autonomous cab and Gartner’s older survey shows 16% answering this way on a similar question.

Those 18% are enough to support a vigorous implementation of autonomous vehicles. For instance, there are still large segments of the U.S. where people have never used a human-driven service like Uber even one time. That doesn’t mean there’s no market for ride-hailing.

In fact, I’d wager that in towns like Tempe, Ariz. or Mountain View, Calif., the willingness to ride would be much higher. That’s where robot cabs are so common because of testing by market leader, Waymo, it’s hard to take a trip without driving alongside one. These surveys show a lack of comfort that is common to all new technologies.

There is a tendency to frame this concern about riding in one of these vehicles in this direction because it seems sensible to distrust a technology where so much is at stake. In fact, it is literally the framing bias that leads us to see that half of people wouldn’t consider something as the most relevant point from the findings.

As with any new technology, there is no need to have broad acceptance right away. Further, there would be no way to meet the demand if half the population wanted to rush into a robot cab. The truth is that the very slow roll out of this technology will occur over years, and by the time that almost everyone in this survey even has the opportunity to ride in an autonomous vehicle, it will be almost trivial.

This variation between hype and common usage is at the heart of Gartner’s Hype Cycle, which actually has placed autonomous vehicles in the “Trough of Disillusionment,” which sounds negative, but is a necessary part of the process.

The final stage of a technology in the Hype Cycle is called the Plateau of Productivity, and usually by the time a technology gets there, no one talks about it any more. This is why it sits well below the Peak of Inflated Expectations in terms of hype.

FYI – the latest version of the Hype Cycle should land in August.