In my last post, I noted that Gartner’s 2021 DBMS revenue numbers showed extraordinary growth. A handful of vendors at the top own most of it: the Top 5 generated 80.6% of the revenue in 2021. Still, the remaining 20% or so of an $80B market ain’t bad. So this time I’ll have a look at one cohort among the players competing for the other $16B or so – the pure play nonrelational DBMS vendors. Gartner does not use the term NoSQL. All of these vendors quickly learned that a SQL or SQL-like API is a feature buyers want, and added one. In a market dominated by RDBMS, these vendors have carved out some success – and commanded a great deal of marketing hype. Focusing on different architectures and the use cases they are best suited for has grown the market for them.

Eight vendors have generated enough revenue that Gartner names them in our published research (the rest are in an Other item.) They are Aerospike, Couchbase, Datastax, Intersystems, Marklogic, MongoDB, Neo4j and Redis (formerly Redis Labs). All are positioning themselves as multimodel to a greater or lesser degree, but generally they are mostly one model – document, graph, wide-column, key-value – with other bits being added in. Some were non-relational before “NoSQL” was cool. Marklogic started its life as an XML DBMS and Intersystems essentially as an object DBMS. Most were in business before 2017, but only Intersystems had already achieved more than $100M in revenue by then. Let’s have a look at how they have all done over the past 5 years. 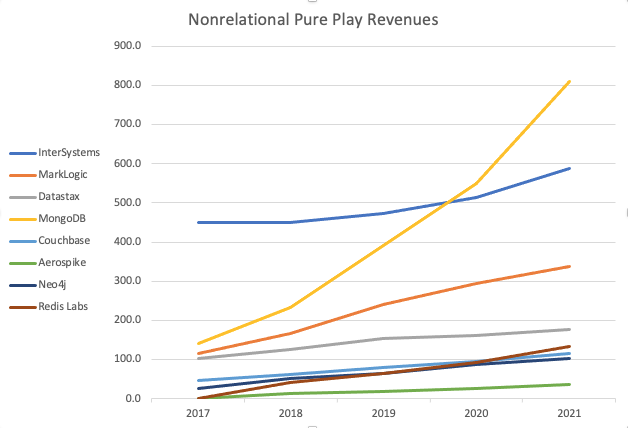 Overall, few of these vendors consistently outperformed the market; all of them grew year over year, and some had very good years here and there. By 2021, they accounted for $2.3B. But the bulk of this revenue (75% of it) is attributable to three of them: MongoDB, Intersystems and MarkLogic. What else can we learn from this data?

Document DBMS is the big winner

The slope of the lines tells the story: Mongo has consistently grown far faster than any of the cohort members, and, in fact, well above the market overall.  This demonstrates two very important points:

It’s not surprising that every cloud platform provider has amped up its response with document support, usually JSON capability. Cloud performance is helpful in understanding how the other vendors fared. The opportunity is obvious. Gartner clients can see in Product Decisions: Top Feature Opportunities for Cloud Database Management Systems by my colleague Robin Schumacher that document support is a key opportunity. 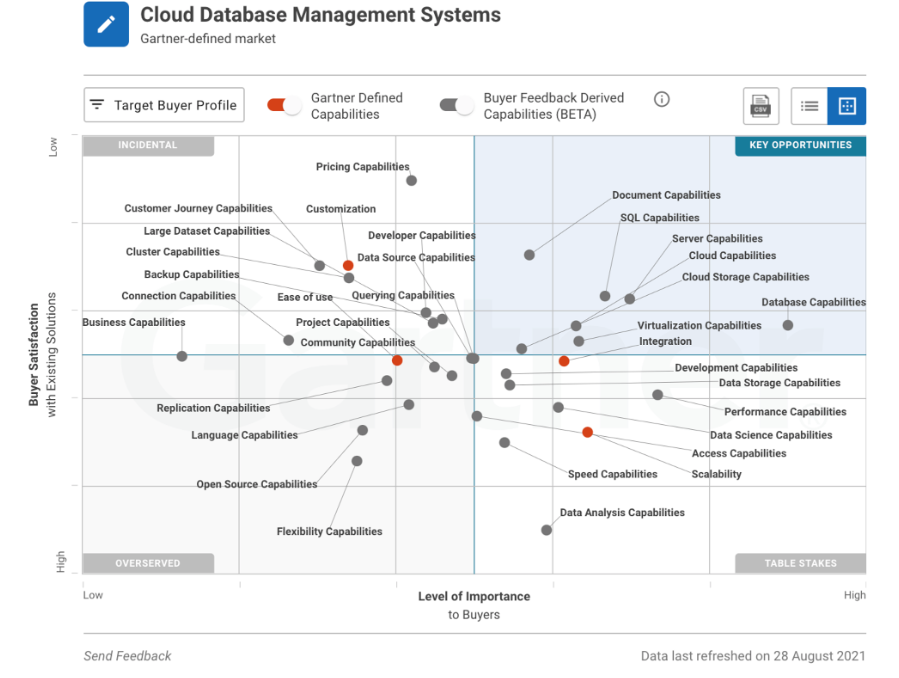 Having a Cloud Managed Service is a Key Ingredient

The nonrelational DBMS vendors growing above the 2021 market average (22%) were MongoDB (47%), Redis (45%), and Aerospike (35%) – all with cloud offerings in place. There is a story there.  Intersystems has had steady, but below market growth rate for well over a decade. This began to change with the introduction of its first managed service in 2021 – the only year since 2017 it grew over 10%. So the likelihood that it participates in the market’s future growth is better than it has been.

A cloud offering is not enough by itself, of course. MarkLogic introduced its Data Hub Service in late 2018 and outgrew the market for the next couple of years, although it slowed in 2021. And it may take time to have an impact. Datastax, the only other vendor above $100M before 2021, introduced its Astra managed service in mid-2020, but has not seen much impact yet. It seems fair to say that “getting to the cloud” is necessary but not sufficient for leading results.

Is that all there is?

No, not even close. The vendors who generate $5B or more DBMS revenue on their  cloud platforms – AWS, Microsoft, and Google – don’t break out their nonrelational revenue. Gartner does not publish an estimate of their individual product revenues. But I am confident that their numbers dwarf these.

It’s likely that AWS alone has more nonrelational DBMS revenue than the pureplay vendors all put together.

Join this free webinar to help devise your winning recipe...

The Future of Work: Key IT Trends Impacting the New Hybrid Reality

This free webinar will show you what technology to prioritize...