Gartner has published software market revenue numbers for 2021. Clients can find the report here. The string of growth for the DBMS market continued – and accelerated – as the market approached $80B, with an increase of $14,5B over 2020. That is an unprecedented 22.3% increase from a year that itself was up 19% over the prior year. Since its brief pause in 2015, the DBMS market has reeled off 6 consecutive years of growth, with the last 5 years all growing in the teens. Since 2017’s $38.6B year, the DBMS market has added $40B – doubling in 5 years.

The biggest DBMS market story continues to be the enormous impact of revenue shifting to the cloud. In 2021, revenue for managed cloud services (dbPaaS) rose to $39.2B – it now represents over 49% of all DBMS revenue. The growth has been stunning: 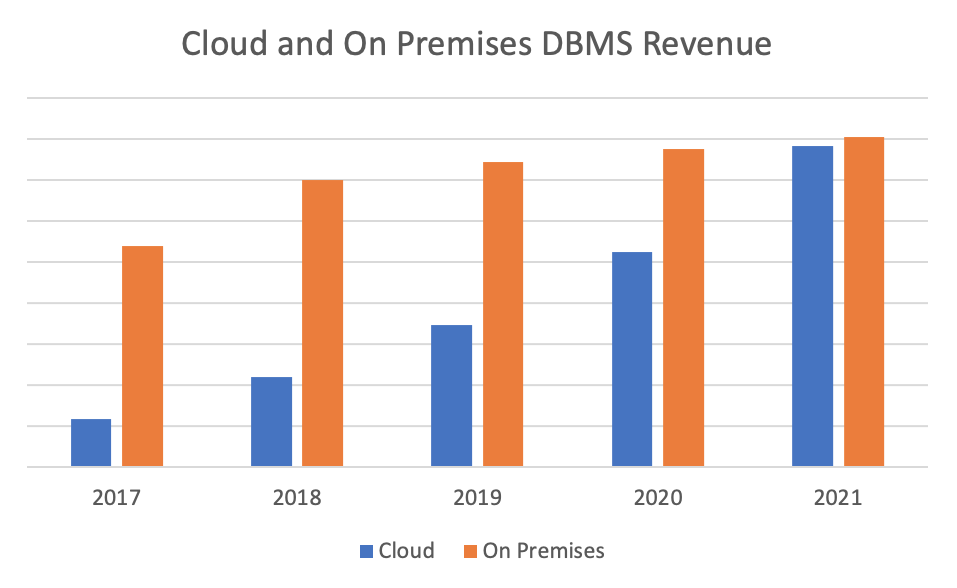 The results for the leading vendors continue to demonstrate the enormous forces wrought by the transition to cloud-based systems. Cloud platform providers lead the way, and continue to make gains based on their performance there. Four vendors moved on the DBMS market leaderboard in 2021, an unprecedented show of volatility at the top. Google entered the top five, displacing SAP and pushing IBM into fifth place – a long drop from its second-place standing only eight years ago in 2013. AWS moved up for the third time in the past five years, taking over second place from Oracle and pulling to a near tie with Microsoft – the two vendors are separated by $65M, or 0.37% of Microsoft’s revenue.

2021 also marked the second consecutive year of DBMS market position loss for Oracle, as it dropped to third place. This is attributable to cloud results as well –  Oracle’s revenue in the cloud has grown well below market rates. Others have fared better: Microsoft’s cloud revenue growth came in at 39.5%, pushing its overall growth to 20.9%, just below the market’s rate of 22.3%. AWS – all cloud – rose 42.3%, nearly doubling the market rate. New entrant Google, also an all-cloud player, with its 64% growth, nearly tripled the market rate. Alibaba approached the $2B mark in 2021, growing 32.8% to $1.8B.

The share of overall DBMS market revenue held by the top vendor cohorts continues to shrink, even as the vendors themselves change. Top 5 share has dropped from 86.9% to 80.6% The Top 3 have fared better, recovering ground lost after IBM exited in 2018 and now declining slightly to 68.5% in 2021. 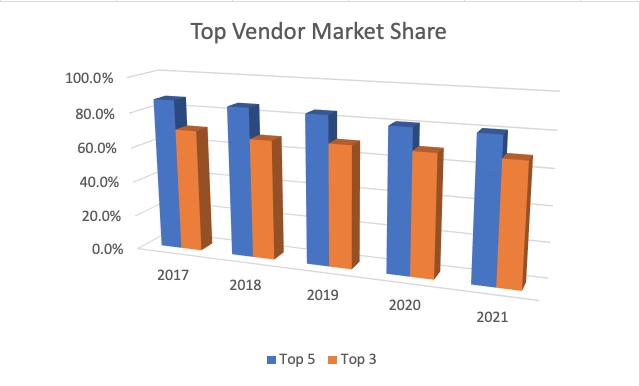 The last five years have also proved fertile for some DBMS market vendors outside the top 5, as several have gained substantially, with momentum that seems likely to continue. In the next post, I’ll look at several of the successes and discuss how independent software vendors (ISVs) can expect to fare in the face of the platform juggernauts.