Last month’s update was obsolete before it published. This often happens because of multiple moving parts and my extended gestation period. I needed to correct entries for both AWS and Hortonworks. The new Tracker is correct as far as I know as of January 2, 2018. Enjoy.

Shifts in the”common core” projects mean it’s time to for me to recast it soon. For example, Hortonworks’ go-forward packaging strategy will have an impact. Hortonworks plans to deprecate Flume, and move Kafka to a different product package, when they ship their 3.0 release. Amazon does not today directly support several of the projects (including – again – Flume), for which AWS EMR provides its own alternative offerings. Google ships Sqoop2, not the “other” one. Cloudera’s Sentry is part of a different security stack from Hortonworks’. And so on. This is normal product maturation as vendors differentiate their offerings from one another. The “disaggregation” of what was the “common Hadoop stack” continues, and many of the clients I talk to are adding other Apache and non-Apache pieces into their stacks as uses dictate and/or vendor offerings contain them.

Some projects are still more “common” than others – arguably, I should add Apache Tez in, because 4 of the 5 support it now. Zeppelin has 3 supporters – it’s borderline. And so on. And some projects are clearly losing momentum – Mahout comes to mind (and yes, please send me outraged comments, if you have some, about my saying so!) While I’ve tried to keep the tracker compact, these ongoing changes are rendering it a bit less useful. I’ll make some changes soon, and discuss in more detail in another post. 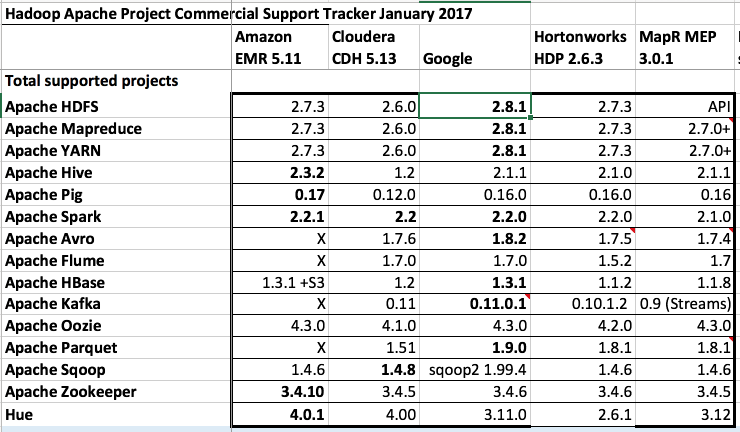 KPI Benchmarks - How Top Performers Prove the Business Value of IT

Draws on data from more than 1,000 enterprises to identify...

Find out how the insights in the Gartner 2022 Magic...