An office email exchange on the history of multi-processors prompted a quick recap, and it was suggested I blog it as others might find it interesting.

Once upon a time computers had a single CPU and a single register, they’d get faster year by year, but it didn’t take long before applications outgrew what those CPUs could deliver.

Initially we’d do multiprocessing programmed into the application to have multiple single CPU systems to share work between them, passing status and data across network links. This rapidly evolved into symmetric multiprocessing (SMP) systems. Servers sharing a set of disks, memory and a high speed bus with the operating system dispatching tasks across a collection of identical CPUs.

Multiprocessor systems didn’t need to be symmetric, and you can also have asymmetric multiprocessing (AMP) where work can be spread across processors of different types. Usually this means offloading some of the processing to a specialist processor from a general purpose processor. Using a GPU to complement a general purpose CPU would be an example today.

SMP processors had their limits, because they shared key resources, and with big workloads they’d conflict with each other for access to disk data and memory. They were also restricted in the amount of memory they could access, so – Non Uniform Memory Access (NUMA) was invented, bringing the idea that not all memory is created equal. Multiple processors accessed lots of memory, but some would be local each CPU, and accessed very quickly, some would be further away, and this would take longer to get to. Every CPU could get to every piece of memory, but not with a uniform access time (hence “Non-Uniform”). Putting the data to be processed by a CPU near that CPU helped optimize performance

But this still wouldn’t work for the very big data processing tasks for Data Warehouse systems, which were very large, because they enabled analysis across an organization and across time, by taking a copy of the data from every other system in the site, and holding several years of history. 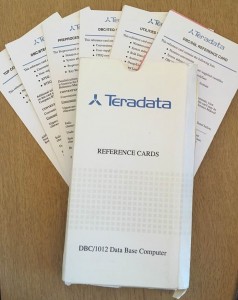 Reference cards for the DBC/1012, the original MPP DBMS machine.

Thus Shared Nothing / Massively Parallel Processing (SN/MPP) systems were invented, beginning with the Teradata Data Base Computer  DBC/1012  (1012 = Tera for Terabyte, see the historic document from my bookshelf below). For the first time systems could be expanded linearly, to pretty much any practical size, simply by adding more servers.

Some people referred to big SMP as MPP (without the shared nothing) with shared memory often enhanced by NUMA (Non Uniform Memory Access) that makes the memory in a cluster of servers look like one big shared memory. Sequent and Pyramid were machines of this type.

This is where you have shared nothing parallel processing going on, but different types of processors are sharing the different types of work. With Netezza this was the difference between the Intel CPU’s doing the sophisticated parallel SQL optimization work, and the very large numbers of simple and inexpensive Field Programmable Gate Array (FPGA) processors attached, and blasting through the blocks of data streaming off the disks they were attached to, all the while doing low level SQL operations at hardware speed.

Now we have available, SMP within nodes, MPP between nodes, symmetric and asymmetric processors, and in memory processing, plus virtualization to combine and recombine elements of processing but it’s interesting to recall how we got here.