You will find that you have to dig to find answers to the obvious question “If I pay for a support subscription, what will be supported?” “Support” in this analysis means if you pay for a subscription, that explicitly includes support for the named project.

The chart here is based on conversations with and/or web documentation from Amazon, Cloudera, Hortonworks, IBM, MapR, and Pivotal. Public documentation of distribution contents mostly remains incomplete, though IBM’s page does a good job.

So: what is “broadly supported” Hadoop in December 2015? The Apache Hadoop web site still names Hadoop Common, Hadoop Distributed File System(HDFS™), Hadoop YARN and Hadoop MapReduce, and gives them a common release number. I leave Common out and call that 3 projects.

Flume, Hue, Solr, and Sqoop are supported by 5. That gets us to 14 projects.

Avro, Kafka and Mahout  have 4 supporters. And now we’re up to 17 projects. 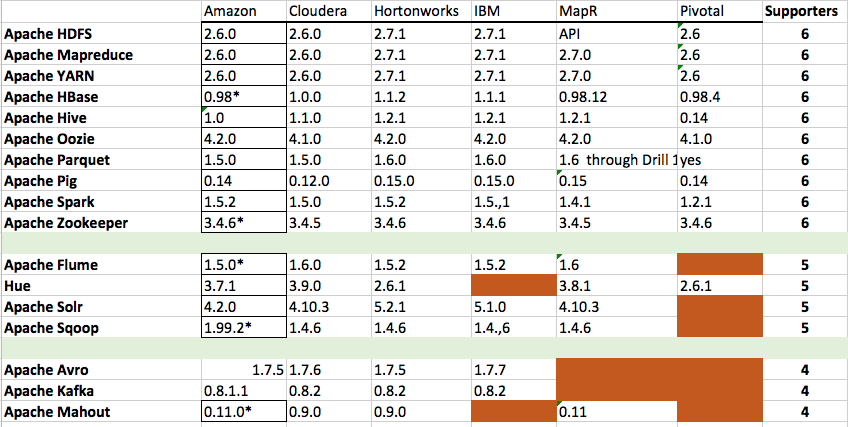 What happens when we get beyond 4 supporters? We get to differentiation – places where the distributors are providing “their own” SQL interface, or security/governance stack, or management console. It’s not obvious, though, because many are not named “[distributor] ProjectX” but “Apache ProjectX.” More on that in the next post in this yearend series.

Gartner Panel: Decide If You Should Build or Buy AI

Learn how to decide whether to buy AI from a...