World leaders are in Egypt this week to discuss environmental sustainability issues at COP27. Hopefully, the discussions will lead to guidance that  reduces UK consumers’ impact on the planet – but it won’t solve everything for us.

Part of the challenge is that environmental sustainability is no single body’s responsibility. National governments play a huge role, but so do corporations and individuals. It might be tempting to pin our hopes on political leaders, but as consumers and employees, we all have roles to play as stakeholders who can influence corporations’ actions.

It all begs the question – as consumers, how do we feel about our chances of affecting change? Do we think brands should promote the actions they take towards a more sustainable future? Or are we too cynical of these messages for them to be beneficial? Will we adjust our buying behaviours to align with our beliefs? Or are our views on social, political and environmental issues completely removed from how we purchase?

In Gartner’s 2022 Consumer Values and Lifestyles Survey, we asked over 10,000 individuals from around the world their views on a range of topics, including sentiment around social issues.

I’ve been particularly interested in how my fellow Brits’ views on social and environmental issues compare to counterparts across the world. Our findings include: 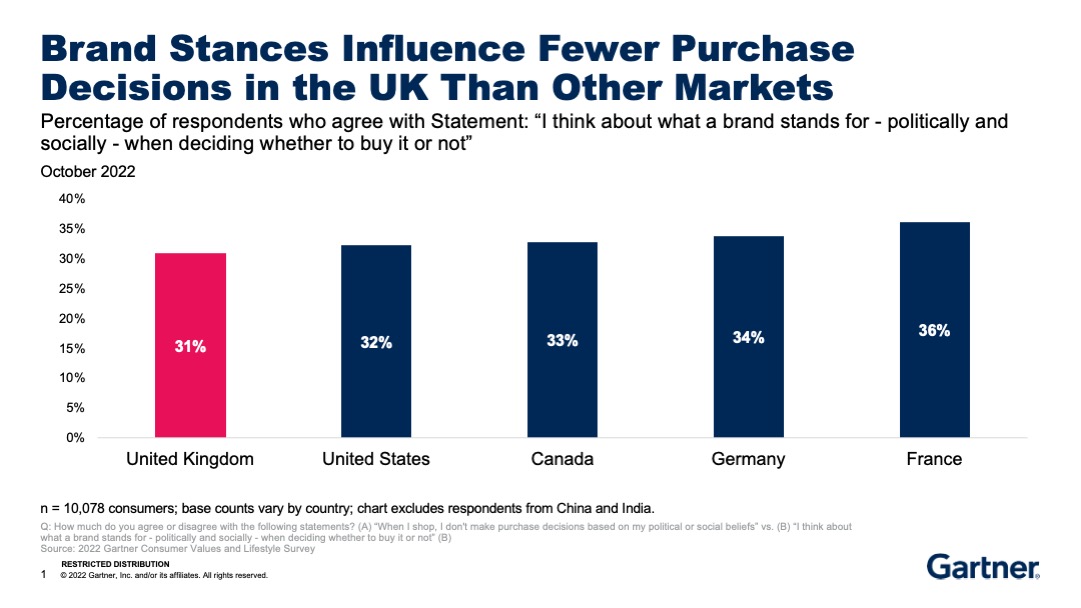 Combined, we can see that British consumers don’t think that brands engage in social issues for the right reasons. They do, however, think it’s important for corporations to take action – even if it costs profits. Brits want to buy from brands that take positive stances on social issues. At the same time, they are sceptical of “greenwashing” messages.

What Does This Mean For Marketers?

The fact that “sustainability” ranks so highly as a value held by Brits should give encouragement to promotions on that topic, since it aligns with customers’ and prospects’ beliefs. Consumers’ values are fairly stable and the view that corporations have a big role to play is unlikely to change any time soon.

Marketers should be proactive in saying when they are investing to reduce their environmental impact, but not for the sake of it. Instead, Gartner’s research on Generating Audience Support Through Social Impact (paywall) has shown that brands’ communications deliver the greatest results when they create a sense of personal fulfilment by demonstrating how audiences contribute to and benefit from brands’ social impact efforts.

Should Marketing Be Involved in Sustainability?

ESG activities, including efforts to reduce environmental impact, should be seen as long-term investments. This ensures they aren’t worn away with shifting interests. Given MarComms teams are often tasked with aligning messaging to ever-changing audience signals, this could prove a worrying marriage for environmental sustainability. After all, the last thing anyone would want is for budget for reducing environmental impact to be removed because it’s not the flavour of the month.

Still, marketers can accelerate the benefits of any social activities where those promotions align with buyer interests and encourage purchases. The data shows that that’s at least as true in the U.K. as anywhere else in the world.

Recommerce: The Growing World of Circularity and Resale

Collision Course: With Greater ESP/CDP Overlap, Which Should You Choose?

This free webinar will help CMOs adapt their strategies for...

Download the fourth issue of The Chief Marketing Officer quarterly...