In honor of the publication of my latest note, Inventing the Future with Continous Foresight, and my love of baseball, I have decided to use this post to describe a plausible future concern for Major League Baseball, one that has become even more concerning based on the precedence, or lack thereof, for the recent Houston Astros cheating scandal.

Continuous foresight is a new approach from Gartner, leveraging the best practices of strategic/corporate foresight and futurism to continuously test business models and strategies, and determine how to adjust either or both to create future success (see Figure 1) 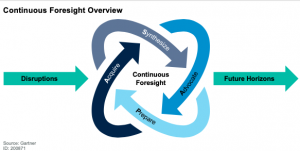 The primary objective of applying continuous foresight is to identify disruptions happening to, and around, the enterprise and develop the ability to respond to them in a way that benefits the enterprise overall.

One tool in the Continuous Foresight toolbox is to leverage the power of storytelling in helping
organizations experiment with new ideas, escape the inertia of the status quo and overcome
barriers of disbelief. Stories help us visualize plausible futures while engaging obstacles and
opportunities not yet realized or even imagined. We discussed this process in detail on a recent podcast.

So for my fellow Major League Baseball fans, here is my most recent short story about the future of baseball:

Bridget is kneeling by Logan’s hospital bedside praying for his recovery. For a 38-year-old baseball player, recovery may mean many different things. Logan was never a superstar but was good enough to stay in the League for 16 seasons, beginning in 2022,  and Bridget knew this may be what finally forces Logan to retire.

Dr. Eileen Jobe enters the room with another doctor Bridget has not seen before. “Mr. and Mrs. Reed, the good news is your husband will be just fine after a few months of rehab.” Bridget and Logan finally breathe a sigh a relief that has been bottled up for the last 72 hours. “However, being hit by a 103 MPH baseball on the side of the head will do some irreparable damage and I fear Logan may not be able to continue his baseball career.”

Tears welling up in his eyes, Logan screams at the doctor “so Dr. Jobe, exactly what does just fine actually mean, I might as well have died at the plate!”. Bridget tightens her grip on her husband’s hand, but he rips it away in frustration.

“I was anticipating that this would be your response, so I would like to introduce you to Dr. William Medina from Genomicorp. He has an option he would like to discuss with you. Dr. Medina”.

Dr. William Medina began to speak, “At Genomicorp we have been working on ways to what we call ‘ Architecting Humans’. It is our proprietary means of enhancing humans to fight disabilities such as yours. My understanding is that you are currently blind in your left eye, and your brain is delaying signals to your arms. With your permission, we would like to fix these items for you.”. Logan propped up “You definitely have my attention, does your definition of ‘fix’ mean I could still play.” Dr. Medina, lifting one eyebrow with a sideways glance said: “oh yes, but better than you ever have before.”

Opening Day has always been perceived by fans, players and teams alike as an opportunity to be reborn and start fresh. For Logan Reed, the third baseman for the Los Angeles Dodgers, Opening Day 2040 was his rebirth.  Logan now had a “rebuilt” eye with augmented reality capabilities, enhanced by a brain-computer implant that used machine learning to analyze the spin of the pitch as it leaves the pitcher’s hand instantaneously informing Logan how best to attack each pitch. That same brain-computer interface enhanced Logan’s hand-eye coordination and bat speed which were severely impacted by being hit by the pitch early last season. Logan felt so proud when his first at-bat of the season was a Grand Slam to deep right field, clearing the bases to the elated fans and teammates. Welcome back to Baseball Logan Reed!

Logan’s regular season ended with him earning National League Most Valuable Player (MVP) honors, Comeback Player of the Year, and winning the Triple Crown with (78 Home Runs (HR), 192 Runs-Batted In (RBI) and a .525 batting average) all historical single-season records.

However, not all was positive for Logan Reed, and many across baseball wanted this season wiped away or if nothing else, to have an asterisk in the record books. Players and fans of other teams protested the ability for Logan to have been physically enhanced and to still play baseball. Over the years, Major League Baseball (MLB) has taken a stand against Performing Enhancing Drugs (PEDs), but never addressed, or even imagined that someone may be physically enhanced through the use of cyber technology

Organizations, such as the American Association of People with Disabilities (AAPD) praised the Logan Reed story. Someone going from Disabled, to almost Super Human and dominating America’s Pastime.

Major League Baseball Commissioner Francis DuBois, the granddaughter of Dr. Frank Jobe who pioneered both elbow ligament replacement and major reconstructive shoulder surgery for baseball players that was generally accepted in baseball for many years,  now had a crisis on her hands. The American with Disabilities Act (ADA) requires employers to provide reasonable accommodations to employees with disabilities, and Inclusion initiative program in MLB called for all people, regardless of gender, disability, color, race, religion, or any other “factor” to keep someone from playing the game of baseball.

2039 was the year that baseball and humanity changed forever.

Marty Resnick is a Research Director on Gartner's Enterprise Architecture and Technology Innovation team based in Atlanta, GA (USA). Mr. Resnick's primary focus is on the role of the Enterprise Architect in the selection, recommendation and implementation of emerging technologies (e.g. virtual reality and augmented reality), as well as, the use of methodologies such as Agile and Design Thinking for use in ideation, innovation and achieving business outcomes. Read Full Bio

Thoughts on Inventing the future of Baseball – Architecting Athletes