It’s not what you think.

Now that the dust has settled on one of the quietest marketing technology acquisitions of the year – that of Maxymiser by Oracle on August 20th – it’s time to pause and ponder what it means. Because Oracle has gone from zero to sixty-five in the mad-tech arms race more rapidly than anyone anticipated. (Mad-tech is my own combination of the phrases “marketing technology” and “advertising technology.” You’re welcome.) So it has got to tell us something.

First, it tells us that mainstream journalists covering our space still do not know much about it. The Wall Street Journal headline was: ”Oracle to Acquire Mobile-Marketing Startup Maxymiser.” Now, whatever Maxymiser is – and it is many things, which we’ll get to – it is neither particularly mobile nor, in fact, a startup. (It was founded in 2006, and its charming British founder Mark Simpson told me it was profitable last time I spoke to him.)

Second, it tells us that customer experience has won. What do I mean?

Let me set up my reveal by laying out 9 Business Insider-sized factoids about Maxymiser:

And for symmetry, one factoid about the deal itself:

Now, the big reveal. Remember my primary point: Maxymiser was a proud and mighty A/B MVT testing product. Got it?

Let’s examine the press release, issued by Oracle last month. Let’s look at it in the form of a word cloud: 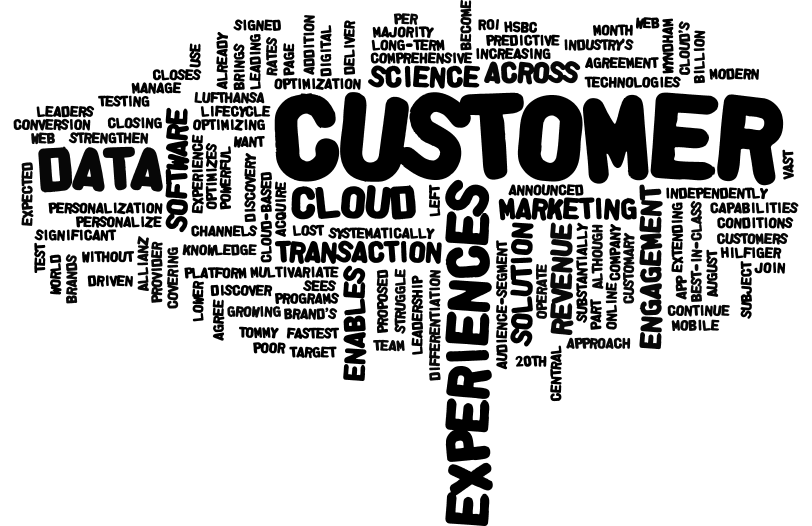 Here’s something: Where are AB and MVT or any other type of testing? Nowhere, that’s where. They’ve been entirely and utterly subsumed by the master meme of customer experience and that, my marketing friends, is exactly what I mean when I say that CUSTOMER EXPERIENCE HAS WON.

So what? Well, for one thing, at least, three formerly respectable, separate marketing tech categories are now officially one. I refer, in order of age, to: Landing Page Optimization, AB Testing, and Personalization. These are all now the same category.

But the currents run deeper than that – so much deeper. Customer experience has become the dominant metaphor for marketing technology as a whole. It is the north star of the mad-tech universe. It is the organizing principle around which marketing- and ad-tech – mad-tech – have converged. This is neither good nor bad, and may be more good than bad. But it’s here. Oracle-Maxymiser proves it.

The Evolution of Personalization

Were I optimizing blog views, I’d have stopped there. But I’m not. I’m not an optimization platform, friends, I’m a blog-reader experience platform – and so, I continue. Let’s indulge in a bit of history mining, consider the morphology of personalization, touch on predictive analytics, and land our ski-doo somewhere in the near future of, say, 2016. Hip?

AB testing has grown up with mar-tech and ad-tech and mirrors its philogony. Its first incarnation tested versions of, say, landing pages against random samples of a single population and declared a winner. This procedure is still used. It’s why you see so many orange “BUY NOW” buttons all over the place – orange buttons won a lot of tests.

Of course, the mass market approach works on average, but it has an obvious flaw. Different groups of people exist within the mass market – let’s call them segments – and they may respond better to different messages. That’s why they’re segments. To press our point, it’s possible there may be a different “BUY NOW” button color that works better on one segment or another. Less trivially, there may be a different product page that works for different segments.

Maxymiser had a nice way to target tests against segments. And how are the segments themselves defined? A marketing analyst could define them manually, if the visitors were logged in or previously identified. Or they could be identified by what they have done during a session – that is, I browse around the Bernese mountain dog-themed tea cozies (to take a recent personal example) and I’m put into a group of proud “Bernese mountain dog fanatics.” This is called behavioral targeting.

The next peak for testing platforms to climb was the problem of scale. There are dozens, hundreds, thousands of things that could be tested on a modern site; and, since we can do segment-based testing now, what about all the segments? Data points themselves that can be used in targeting are also daunting: location (using IP address or even, at times, app location), time, behaviors, referring sites and traffic sources, info from the CRM system, ya ya yo.

This all calls for automation. Last year, Maxymiser launched a feature it called MaxPredict that did something called segment discovery, using unsupervised techniques to identify groups of site visitors, run tests, declare winners against different segments, and allow more rapid improvements. Auto segment discovery is a fiendishly difficult task, even today, and even test pilots like the 150 engineers at Google Analytics are trying to figure out how to productize it.

A trickier problem – which gets us right up to the living present in the personalization space – is cross-channel profiles and cross-device identification. The goal is clear enough: to be able to resolve identities no matter what device or browser people happen to be on at the moment, and to be able to run tests against individual on different channels. And so on.

So it’s easy to see now how “personalization” and “testing” turned into the same thing. Personalization engines – examples include RichRelevance, Certona, Baynote – use segments and behaviors to suggest content that is more likely to sell (or be read, or whatever), and they learn from mistakes. Testing platforms do exactly the same thing. They’ve converged.

The final step in our wonky walk here is from personalization to . . . you guess it: customer experience. Customer experience is the new personalization. In moving its mojo from humble “AB/MVT tool” to haughty “Customer Experience engine,” Maxymiser reflects exactly the industry’s shift from talking to itself about technology to talking to outsiders about love and humanity.

In other words, mad-tech is now like every other consumer-facing industry in the world. Ultimately, the marketers have won.