It is impossible to know if anyone is actually reading your long-form content. You can count how many people looked at it, but not how many gave it real attention. Even — in the best case — finished it.

Which is why I did the #macaroni experiment.

On January 12 and 14th, 2016, I unleased a duet of long blog posts called “Top 10 Amazing Secrets of DMPs” — Part 1 and Part 2 — and combined they came to about 6,300 words of science. That’s the equivalent of two substantial New Yorker articles. And they’re by far my most popular blog posts of the past four years.

They provided evidence that the advice I offered in a different post was right: “The #1 Secret to a Successful Blog Post.” The #1 Secret: “Write longer posts.” In which I argue for depth, originality and more time in composition — not quantity over quality.

These vivid titles (“Top 10 …” and “#1 Secret”) happened at a time when I was experimenting with BuzzFeed-like clickbait to see its impact on views. My conclusion was that — at least in my own little sphere — readers are looking for information, not insults.

So what is The Great #Macaroni Experiment? At the end of part 2 of the DMP series, I inserted this request:

“Favor: If you’ve read down to here and got something out of this 6,300-word DMP series, please tweet me @martykihn. Just tweet the simple hashtag #macaroni.”

The idea came from a film by the waifish performance artist Miranda July. The film, “Me and You and Everyone We Know,” is an oddly charming rom-com wherein Miranda falls for a shoe salesman and submits VCR demo tapes — it’s 2005 — to performance art curators. Frustrated by the cavernous silence of these blind submissions, she puts a simple request near the end of the tape: If you’ve watched to here, please call my number and say the word “macaroni.”

Beautiful. I did the same. Here are the results.

A total of 42 #macaroni responses were tweeted to @martykihn between January 14, 2016, the day part 2 was posted, and last week. That represents less than 0.5% of the total number of people who actually viewed part 2 in that period, according to Google Analytics. Remember this is a very long post about a rather obscure, even technical, topic, and I am very happy to have engaged almost four dozen souls. My private goal was 10, so my own mission was accomplished.

Content marketers out there may be interested in the #macaroni tweeting pattern. This chart shows the dates and volume of #macaronis (blue line) as well as the cumulative running total #macaronis (red line): 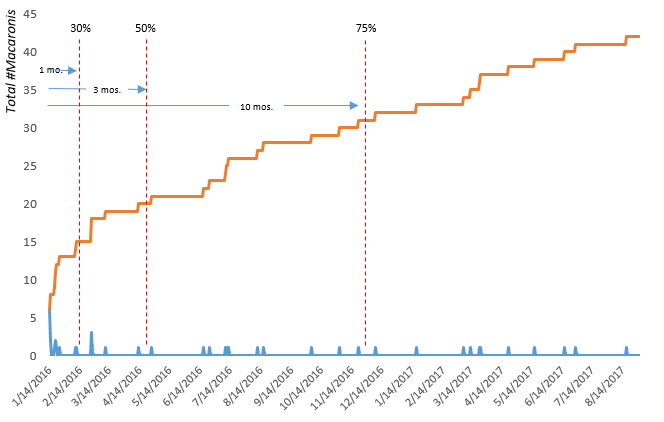 As expected, there was a higher concentration of readers in the beginning — 30% of the #macaronis occurred within the first 30 days. I actually had six #macaronis on the day part 2 was published; my best day. Within 90 days, I was up to 50% of total #macaronis. You can see from the slope of the red line that the rate of #macaronis is gradually — although not rapidly — declining.

But what’s most interesting to me is that after the first 30 days, the rate of readership stayed fairly steady. It took 28 weeks to go from 50% to 75% of total #macaronis and another 28 weeks to get to 100% (today). After a few weeks, I stopped promoting the posts on my own Twitter feed and LinkedIn profile and @Gartner_Inc stopped as well, so any readers I’m getting after that period are finding me on their own, via search.

So what can we learn from this experiment?

So there you have it. Thanks to all who participated. #macaroni

How to Position Your Brand to Drive Preference

Discover insights and recommendations that can help you foster brand...