No one person invented programmatic advertising, of course. But someone who was among those present at pivotal moments was Joe Zawadzki. The CEO and co-founder of MediaMath, Zawadzki cuts a floppy-haired, colorfully-lensed figure in the ad tech space. A Tesla-piloting Upper West Side-resident and expatriate Canadian who started as a financial analyst building real estate valuation models in the late 1990’s, Zawadzki rapidly fell prey to his own entrepreneurial tendencies and the lure of e-commerce apps. 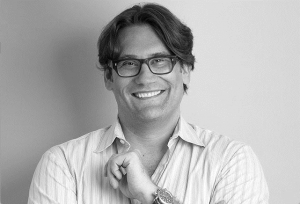 His first venture, launched in 1999 during the dot com frenzy, was a suite of apps for what was then called online shopping. Funded by $1 million from angels affiliated with Goldman Sachs, the venture was forced to work around I.T.-controlled commerce systems like ATG and BlueMartini — driving Zawadzki into the precursor to cloud SaaS development, server-side ASP applications, creating collaborative filtering and recommendation engines for digital storefronts.

And then he found his theme: applying technology to advertising. The company he co-founded, Poindexter, provided tech to agencies. It turns out that in some sense programmatic advertising grew out of website optimization.

WHEN DID YOUR AD TECH STORY START?

It was around 2000 or so. We were doing clustering algorithms for personalization, using our tech to decide what to show people when they navigated a site. The purpose was to improve conversion on the site. It was a natural extension then to wonder, you know, how do I get better prospects onto my site in the first place. The obvious way to do that was to do an analysis of the best customers, what they looked like. We had access to B.I. and a lot of insights around [existing] customers. So we could potentially do a lot. The problem was the media buying process itself was broken.

“… the media buying process itself was broken”

HOW WAS MEDIA BUYING BROKEN?

At the time, it was basically you go to the top twenty retail publishers, you buy space on all of them. Sort them by click-through rates. And, you know, God will figure out the rest. We had these strategic accounts, including AOL, American Express and Delta Air Lines. They had these great insights and as it trickled through the value stream of media, it just got watered down to age and income. You’d take that and bounce it against the publishers and get an index. Measure engagement with a banner using clicks. I thought: This can’t possibly be the best answer!

WHAT DID YOU DO?

Well, we launched a passback network. [Note: “Passbacks” are ad impressions that do not get a qualified bid, i.e., remnant inventory.] We would get an impression offered to us by a publisher and we would score it in real time and pass back what we didn’t want. We did about 85-90% passbacks on an ad by ad basis. There was a big discrepancy for redirects [i.e., data leakage]. Basically, we lost 2% of the traffic for each hop along the passback chain. What that meant was the publisher might sell for $3 CPM and keep 5%, passing back 95%, say. That rejected stuff would drop back into the system as a house ad usually at about 25-50 cents [CPM].

It was basically a terrible system — very inefficient, obviously. And it didn’t scale. But we represented extremely valuable marketers, sophisticated and demanding with big budgets and quantitative goals they could commit to. We basically forced publishers to do what we wanted from a business model, workflow, and technical implementation standpoint. Which worked as well as forcing people to do things generally does.

At this point I’m wondering how can we bring this real-time idea to the publisher landscape. Basically, how can we help advertisers buy the wheat and not the chaff. Poindexter was a buy-side solution. And it became obvious to me that to do this [real-time impression valuation] thing at scale we would have to fix the publisher problem.

“… it became obvious … we would have to fix the publisher problem”

We had this dynamic advertiser performance solution already. And I had the idea for POE for Publishers [Note: Predictive Optimization Engine, the core of what would become [x+1]’s ad tech platform]. It was a product for publishers. We were selling into the DoubleClick Sonar network, which was the performance media arm of DoubleClick. At this point DoubleClick decided to sell off its media business to L90 [later Max Worldwide], and DoubleClick itself was pure tech — an ad server.

Later to be sold to Google, of course. At this point, the story gets complicated. (For a more detailed telling, see Mike Smith’s fascinating 2014 book Targeted.) So here is Zawadzki, CEO of Poindexter/[x+1], and he’s working with a refugee from DoubleClick’s media business, an ace sales guy named Mike Walrath. It is now 2005.

At this point, the size of the opportunity got better. We realized we could mash together two media offerings around our ad server. Walrath and I were spending hours and hours each day banging out this idea. We were basically going to adapt the ad server so it could pick impressions that performed the best. We wanted to automate a process that was manual.

And just as we’re getting closer to making it work, L90 gets acquired by Excite. Now Excite already had its own ad server, so it didn’t need this thing.

BUT YOU DIDN’T GIVE UP ON THE IDEA?

Mike and I still saw this as a real opportunity and we were like, Why not do it anyway? Walrath left Max Worldwide. He was doing go-to-market strategy on the publisher side for [his own start-up] Right Media. We were building the core tech underneath. We spent about nine months building this idea out, working with Brian O’Kelley who was Senior Director of SmartServe, which was our own ad server.

This was on 23rd Street and Fifth Avenue. We were building the product. We had all of the joint venture and entity formation agreements ready to sign, and I went into my board. They were the investors and I was this crazy founder guy. I didn’t have the greatest relationship, you know. And the board shot it down. They said no.

WHAT WAS DIFFERENT ABOUT WHAT YOU WERE TRYING TO DO?

Basically, it would be the first place that intermediaries go to create liquidity. Everything else at the time was publisher relationships, revenue share with publishers. They were sold by networks to brands or agencies. What Right Media did was let people create seats and buy and sell from each other. If you needed demand, you could plug into demand. If you needed supply, you could plug into supply. Some networks had no demand or no supply, but we would have both sides.

The board’s veto was disappointing, but as Zawadzki says, “We moved on.” Walrath and his partner, Matt Philips, got financing from Jonah and Noah Goodhart, later co-founders of Moat. O’Kelley, later founder of AppNexus, took a job with Walrath at Right Media, which started operating independently of Zawadzki’s company. Right Media was acquired by Yahoo! for a reported $680 million — leaving Zawadzki, as he says, with “no money but a big chip on my shoulder.”

He picks some people — “no more senior than Directors,” he says — and forms a team from [x+1] employees. They’re doing “bulk buying of inventory on behalf of clients and allocating based on buy-side demand.” And then it gets interesting.

IT SOUNDS LIKE YOU WERE RUNNING AN AD NETWORK?

It was a very effective ad network with buy-side alignment and transparent pricing. We spent six months torturing the code base to get media optimization into the ad server to make it work. And pretty soon this subsidiary [of [x+1]] was bigger than the parent from a revenue standpoint. It just worked. So I made a decision. I was eager to finish the seven-year journey, and I was spending a lot of my time on board management. I basically asked them to buy me out. I took ten cents on the dollar and got a clean bill from an intellectual property standpoint. We bought ourselves out of [x+1].

I took six months off. Did some work for DoubleClick. In that period, all the exchanges were getting bought by portals and I saw this as a real tipping point. I saw that we needed a sophisticated buy-side entrant to make use of this trend. Agencies were treating buying like ad networks, it was all a managed service proposition. AOL hired us as a yield optimization consultant, to make recommendations on how to improve inventory yield. We were hired by DoubleClick to lay out a road map for the buy-side optimization strategy.

“The history of marketing tech is basically a graveyard of dashboards”

SO WHEN DID MEDIAMATH HAPPEN? WHAT WAS THE MOMENT?

It was the summer of 2007. There was a defining moment early in that year. I realized there was sufficient liquidity in the market. You had about ten billion dollars changing hands. You had the sell side committed to publishing inventory through exchanges. Now there is a moment when — if you can be the smartest buyer in the exchange — you can deliver 10X ROI. That is basically the threshold for software disruption. If you can deliver 10X ROI people will change their business models and staff accordingly. You just need to show people that if you do this new thing, you can get those types of returns.

WHAT WAS DIFFERENT ABOUT MEDIAMATH?

MediaMath was founded in 2007 and began to develop one of the first automated real-time-bidding solutions for the demand side, advertisers and agencies. It applied smart tech to value bids and optimize for the advertisers’ goals, across publishers and networks. MediaMath, still independent and privately-owned, was one of Inc. magazine’s fastest-growing private companies of 2016, with reported revenue of $601 million (including traffic acquisition costs) and year-on-year growth of more than 3X.

IS THERE A THEME IN YOUR CAREER SO FAR?

The pervasive theme is how technology and quantitative methods can transform marketing. Finding a better way than the techniques of traditional media buying.

I’d also say I was interested in how to engage with the code to inform what an advertiser really needs at scale. You need scale. You have to have tech connecting all the touch points so you can inform the deeper KPI’s that matter to advertisers. You need to enrich these with insights about the consumer. Basically, it’s about how to make the cash register go.