It’s time to get real about measuring social marketing. I’m not talking about ads on Facebook or, ahem, Snapchat — that’s just advertising. I’m talking about that thing we’re supposed to be doing around the clock 24/7: creating great content that reflects our values and sharing it on our social channels so whoever’s there will pass it along and we will . . . well, what happens next is never entirely clear, but it’s got to be something. Right?

Let’s come right out and ask it: Does social marketing have any real impact on any business metric?

That’s business metric. Not social metric. Using fan counts or retweets as a measure of impact is kind of like asking the Cake Boss how your diet is going. No, I’m talking about connecting all the stuff we’re doing to influence social chatter to the things that ultimately matter: revenue, market share, profitability, stock price, market cap.

Good news: Rather than offering mere opinion, here’s actual data. For six months ending last May, 2014, Gartner used a social listening tool called Tracx to collect and analyze public conversations about a select list of companies, on popular social channels such as Facebook and Twitter and blogs. The targets we chose were leading digital marketing or ad tech related software companies or digital marketing agencies. There were 28 of them. This is what we found:

There was no observable correlation between social marketing volume and business success for digital marketing software and services companies.

You heard me. Before we start parsing out explanations — or you tell me the methodology is flawed — let me take you through what we saw. Also note that this was not a peer reviewed experiment and is not official published Gartner research. It is a conversation starter.

Sample: The 28 companies in our sample included both large brands, such as IBM and Adobe, and smaller ones such as Datalogix, DataXu and Turn. These are companies that come up the most in inquiries with our clients. We also included a few prominent agencies such as Razorfish and Xaxis.

Filters: In setting up our monitors, we tried to filter out irrelevant conversation (to the extent possible) using negative matches, and to include only conversations relevant to digital marketing. For example, we were only interested in following Google Analytics, not Google’s self-driving cars, and IBM’s digital marketing platform, not its hardware or consulting businesses. Some brands such as Turn were very difficult to handle, but we did our best.

(1) Some brands make a lot more noise than others

Our sample could be divided into three types of brands: noisy, average and quiet. Like so (showing total posts captured): 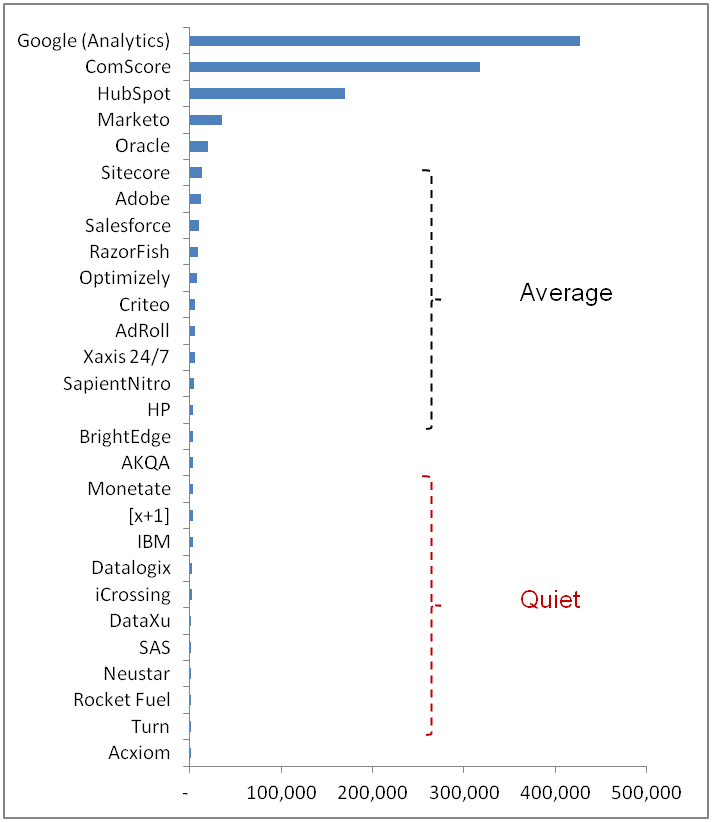 Obviously, Google is a hot topic but it’s always an outlier. So is comScore because it comes up in conversations that cite it as a source for media metrics. On the other hand, HubSpot is an acknowledged master of social marketing — that’s what it does, after all, enabling brands to market themselves, — so it’s clearly doing something right. Among the other players, Marketo (a public company), Sitecore (CMS) and Optimizely (an optimization tool) are making some noise. On the other hand, our friends at Turn and Rocket Fuel (pre-brouhaha) and SAS are more subdued.

But does any of this matter? Well, it’s hard to see how. Everyone loves HubSpot, and it recently had a successful IPO, but is it really a better company than Turn? Better at social marketing, certainly. It’s market cap is about $1 billion. On the other hand, Marketo is only making about 20% as much social noise, but is valued at $1.6B. Could HubSpot hold back a little and see its value rise?

And what about our wallflowers: is there comparative modesty hurting their bottom lines? [x+1], a well-regarded DMP/DSP, was acquired by Rocket Fuel recently. Certainly, its social marketing was softer than its product. Would a better program have got it a higher exit price? Maybe. But what about Turn or SAS? Turn raised $80M simoleons in January and SAS just built a new building in North Carolina. They’re making barely a peep in the social space. Are their investors and customers just ignorant people?

Part of the problem here is that social measurement itself is flawed. We don’t and can’t get a true picture of the entire “social conversation” using the available tools. Much of the social net is dark matter: IMs and emails (if you count them) are invisible; as are non-public conversations and much non-text communications like pictures. The reliance on public sources has the effect of making Twitter seem a lot more important than it is.

Here’s the channel skew of our sample: 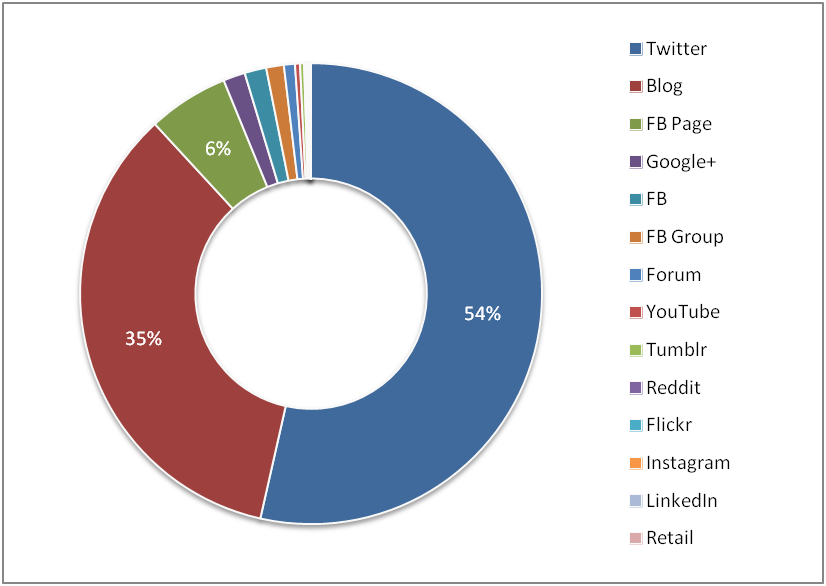 Well over half the “conversations” happening about our companies were tweets. You’ll find this in most social reports — they are overwhelmingly reports about what’s happening on Twitter. Why? Twitter is almost 100% public and available to social monitoring tools. It encourages short bursts of outrage. Facebook is mostly non-public; remember, social monitoring tools are not in your “friends” category. They are strangers to every party. Brand pages are often public, but I suspect most real unfiltered product-related commentary does not happen on brand pages. (Blogs are probably overrepresented here because our companies — digital marketing software and services players — are the subject of a disproportionate load of blog ink.)

So I’m admitting our measurement methodology is flawed — badly flawed. But it’s not our fault. A more complete picture might show us stronger patterns, where smart social marketers dominate a productive dialogue with engaged consumers. But we don’t get to hear that conversation. Nobody hears all of it. Not even the NSA.

Although I’ve blogged previously that long posts are more likely to be successful than short posts (check me here, bros), I’m pushing it. Consider this Part 1 of 2 (or even 3). In the next part, I’ll continue revealing the results of our little experiment, including these amazing topics: