Leave it to M.I.T. to make us realize, once again, how mentally mundane we are. I speak here as a human being. A relatively recent book from two non-robots at the M.I.T. Center for Digital Business — their names are  Andrew McAfee and Erik Brynjolfsson — has the ominous title, Race Against the Machine: How the Digital Revolution is Accelerating Innovation, Driving Productivity, & Irreversibly Transforming Employment & the Economy.

And let us pause for a moment to ponder the word “irreversibly,” which points us in only one direction.

While the professors take pains to balance the picture, the short thesis is that we are in the midst of a “revolution” (this time, not overhyped), and it’s as disruptive as the Industrial Revolution of the 18th and 19th centuries. That old revolution ripped out social structures by driving farmers into cities, pushed work from the field to the factory, caused good things (education, literacy) and bad (disease, pollution) that could not have been foreseen when it all began.

This transition is already under way in digital marketing. As recently as ten years ago, my agency employed a staff of fairly well-paid workers who generated reports by hand. We downloaded numbers from an ad server (DoubleClick, AdWords), dumped them into Excel; we’d generate graphs, cut and paste into Powerpoint, slap on some headlines. And do this again and again. We called it “measurement,” and it seemed like a career.

No longer. Today, live data feeds are aggregated into dashboards, software automates campaign reporting, and intelligent systems perform math exercises like marketing attribution and predictive modeling that used to require human consultants with degrees in statistics — or, more likely, were not done at all.

We still need people in the mix, of course, but the nature of work is changing fast. Worried about your job?

There is an easy way to predict how at-risk your occupation is for imminent robot attack. The two dimensions relate to the things computers do best: (1) repetitive tasks, and (2) structured data. If you’re a knowledge worker, your biggest enemy is routine. To the extent your work is predictable, it’s codable . . . and you’re a target. Likewise, the safest professions are those that deal in manifestly human activities, starting with the obvious (dealing with other humans, e.g., sales or account service), and moving into the chaos of unstructured information (e.g., creating images, telling interesting stories). 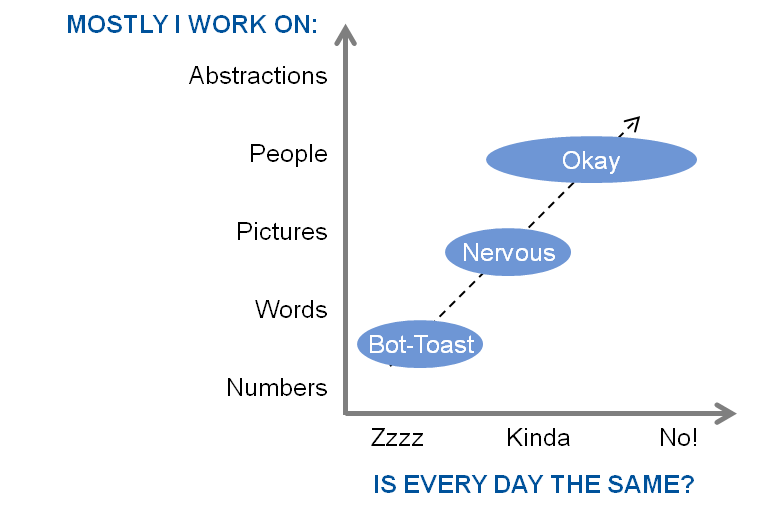 Where is your job in this two-by-two? If you’re in the lower left, prepare to welcome your new overlords. (Of course, this matrix saying nothing about how much you’re paid or appreciated; it’s just about the robot invasion.) Good luck out there.

This free webinar explores the risks, opportunities and activities that...