Much of the screech about Cambridge Analytica, foreign actors and bots swaying elections via the medium of advertising seems to me naive. (And I’m not the only one.) Setting aside the ethical oompus boompus, it betrays a touching optimism about how advertising works.

Generations of geniuses have worked heroically to get you to consider — at that Zero Moment of Truth, when it’s just you and the shelf in the store — maybe, possibly, trying a different detergent.

Ads have also been known to get people to overpay for their footwear.

To assume that a few 300×250-pixel ads — no matter how well-targeted and -timed — could cause someone to change her basic values or her vote is to mistake paranoia for the world.

Advertising doesn’t work that way. It hardly works at all. It’s a cumulative enterprise that is both mysterious and trivial. Since the days of The Hidden Persuaders, we’ve assumed it has magical powers even as we’ve almost totally ignored it.

Yet it is important for capitalism and, as Anton Chekhov said, “is the essence of democracy.”

THE TROUBLE WITH ADVERTISING

The real trouble with ads is that they happen in the mind. They are a form of sensory input intended to influence neurons and, in time, behavior. To ask how advertising works is to ask how learning works. How would you answer that question?

The human brain itself is the reason brand advertising is so difficult to measure. It’s a long-term proposition whose immediate impact sits in pathways that can’t normally be seen. We end up asking people to describe their own opinions — this process is called “brand tracking” — but it’s a very approximate science.

So how does advertising work? A few years ago, a great overview of the state of the art appeared. It’s called The Advertised Mind: Groundbreaking Research Into How Our Minds Respond to Advertising and was written by Erik du Plessis of Kantar Millward Brown, a research agency.

I’ll hit the highlights here. (But really, you should buy the book.)

THIS IS YOUR BRAIN ON ADS

So this is your brain: 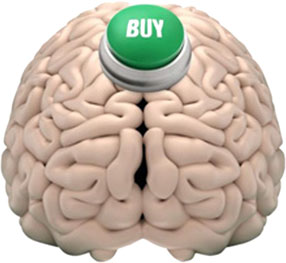 Without getting into deep water, let’s assume that inputs to this organ come via the senses. First they go into the limbic system, where they’re processed by the amygdala. This is the piece of our heads that formed first, before we had data science boot camps or even junior high schools — the piece responsible for keeping us alive in situations far more dangerous than most of ours.

Two things to know about this sub-rational gatekeeper:

It is also SELECTIVE … because, apparently, we have always been overwhelmed by sensory data and can’t begin to notice it all. Even before Snap and the iPhone X, our brains said: “Too much! Give me the bullets!”

For advertising, the implications are obvious. To rise from our sensory swamp, an ad must be EMOTIONALLY INTENSE. We assume the binary default is positive, but there is evidence that negative works as well. This study (from a consultancy now called System 1) showed that ads we hate are more likely to get us to buy a product than ads we don’t notice: 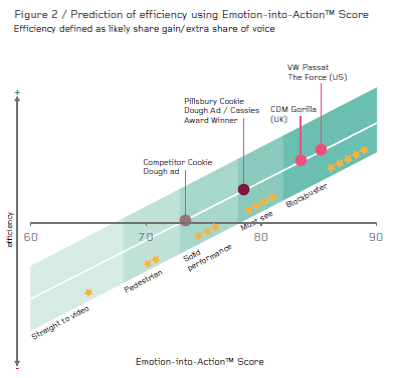 “The first task of advertising it to ensure that it is noticed, and to this purpose it has to be designed to attract an emotional response from us.”

THIS IS WHAT HAPPENS NEXT

So we have our hard-hitting emotional sense-eliciting object, aka, an ad. Now an aggressive direct response marketer stops here. If you’ve ever watched Home Shopping Network late at night and seen all those other people swooping in on your Plaid Snuggie and TIME IS RUNNING OUT! and you only have 4 LEFT AT THIS PRICE! and it’s … well, you feel me right now.

Most ads aren’t so demanding. At least, they want to linger in the mind long enough to get you through a browsing stream, or into a store. And brand ads will need to wedge themselves into your mind somehow for the haul, when you’re ready for a new car in a year or two, when your lease runs out.

Here, we get into the realm of memory. Memories turn out to be unlike files in databases, where information has an address. They are a “gestalt” of neurons assembled into patterns and a web of eccentric associations.

All of which helps to explain your media planner’s insistence on reach AND frequency as KPIs — you need frequency to establish memories. It also argues that your campaigns should be consistent over the years or you won’t benefit as much from those starter-set associations.

“The second task of advertising is to ensure that it is remembered, and this is intimately tied in with how often we see it.”

We’re not quite as Cartesian as advertisers and their agencies thought. It’s not that we have emotion and reason as two parts of a body-mind. The body-mind is a thing in itself and our emotions ride over our reason without even asking. For proof here I’ll just point to how violently two intelligent people can disagree in our political climate. Facts can’t destroy feelings even if they’re true.

People in the ad business fall back on a few big studies or thinkers that seem to make sense. One was an ARF study that showed an ad’s “likeability” determined its success. This aligns with du Plessis’ argument about emotion but favors the positive spin. It’s probably right. Certainly, I’m more inclined to want to remember things I like to think about than vivid ads – like those Allstate Mayhem spots – that just stress me out.

Another was Al Ries’ assertion that P.R. works better than ads for new brands. Ries is a positioning pioneer who is usually right. He’s also agreeing with du Plessis’ insistence on (1) frequent exposure, and (2) a basis of memories to fertilize the ads to come.

In his influential How Brands Grow, Byron Sharp isolated two simple factors for a brand’s success:

Sharp described this packaging as “sensory and semantic cues” such as logos and celebrity spokesmodels that made a brand “easy to like, memorise and recall” [he’s from New Zealand]. Which lines up well with du Plessis’ blurb of memories as webs of emotion-laden, pre-primed associations.

Another instruction I’ll mention is that the most important task of an ad is not to be creative but to be remembered. It can do this best by evoking an emotion — let’s say a positive one — and adhering its sensory stimuli to the images, text and spokesmodels directly associated with the brand package.

It must also be repetitive. Frequency matters more than reach. Liking an ad is not liking a brand. And above all, don’t assume these secrets will help you win the next election. You might, but it won’t be because your ads changed peoples’ lives.

How to Position Your Brand to Drive Preference

Discover insights and recommendations that can help you foster brand...