Many of us who majored in marketing did so because we mistook it for show business. This, we will never admit. Marketing seemed from a distance to be as close to beating the system as a working unit could get. Why – there are brands that have personalities and talk to segments – and, if they’re big brands, they appear on TELEVISION during the Super Bowl!

Then we graduate. Turns out marketing is much more business than show, and getting moreso all the time. Before our eyes, the discipline is morphing into a branch of matrix algebra and celebrities have dissolved behind the arras at the Avalon.

Which is a very good thing, amigos. A true, good thing.

Because I have seen show business. I have returned. It is not a science. It can be an art, but it is most certainly an alternate reality. If you will permit me a line or two of late-summer nostalgia, let us go together, you and I, through the lemon-frescoed gates of the 20th Century Fox lot in Culver City . . . past young people so beautiful they look like stained glass . . . deep into the dream machine itself. 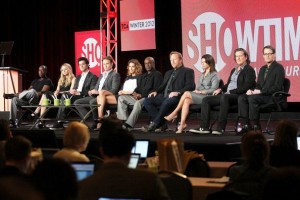 Don Cheadle and I bookend the cast and creators of House of Lies.

Now, what if I told you that the entire universe of people whose memoirs have been turned into prime-time television series consists of one woman and one man? As you already guessed, the woman is Piper Kerman, whose my-year-in-prison memoir Orange is the New Black is a very popular series on Netflix.

And as those gifted enough to speed-read end titles may know, Showtime’s comedy House of Lies – starring Don Cheadle and Kristen Bell as the world’s most highly sexed management consultants – is based on a memoir of the same name by a washed-up ex-TV writer turned management consultant who is . . . well, me.

So while we all may be snowflakes and so on, in the category of people whose fictional selves have won Golden Globes for Best Comedy Actor, I am in a class by myself. You’re welcome.

Don Cheadle wasn’t supposed to take home the hardware two years ago. He admitted as much in his snub, I mean, acceptance speech (“This is a surprise!”). (He did not thank his alter ego.) HuffingtonPost.com called it “one of the most surprising moments of the 2013 Golden Globes.” Cheadle was a freshman contender against the formidable Alec Baldwin, Matt LeBlanc, Louis C.K., and Jim Parsons, none of whom play a character even remotely based on me.

On the other hand, Cheadle does play a character remotely based on me. His name is Marty Kaan, we’re about the same age, and we both have a flair for loose jargon and that brand of ’80s-era sarcasm that’s either witty or rude, depending on your area code. We are (or were, in my case) sensitive men trapped in an industry that’s a castle of smoke held together with insights usually stolen from somebody else.

I see pieces of my book in the show all the time. The season-two premiere had a running bit in which Marty’s team is on speakerphone with a man who sounds important, and it becomes clear none of them know who he is. In consulting, as in life, there’s no upside to offending the rich. The team double-talks around him, trying to extract details. I remember that call very well. It was a lot funnier on television.

Most of the show is pure fiction. I don’t have a cross-dressing son, a drug-addled ex-wife (yet), a rack of fine suits, an Italian racing machine. I don’t routinely put the moves on my clients and co-workers, and if I did I’d be writing this from jail instead of an orange cubicle. Marty Kaan is irresistible to women and has the world by the balls.

There’s another obvious difference between us. That’s right: Cheadle is from Kansas City, and I grew up in Michigan. Oh, and one more. As Cheadle told Ballerstatus.com after his Golden Globes win, “[Martin Kihn] is not like me at all in the outside packaging.” Which is his way of saying I’m white.

He also called me “an interesting cat,” which is going on my tombstone. Kaan is the man I would be if I were somebody else, but I don’t identify with him. I watch the show like anybody else: as an outsider. It’s probably better that way. As my wife says, “If they made a show about our real life, nobody would watch.” Not even me.

When my book came out, other consultants hated it. They fire-bombed Amazon with anonymous one-star reviews and blow-torched me off their holiday lists. But the series—that, they love. It’s rehabilitated me in the profession. From ungrateful quisling to glamorous figurehead in twelve easy episodes.

It’s no secret House of Lies owes everything to Cheadle. Aside from the, ahem, genius source material, he’s the reason it works at all. The man’s in every scene; he sets the tone. His Marty Kaan is a loathsome moral degenerate with the class of Trump, but he’s got an Escalade full of elan.
I’ve met him a few times in my role as consultant to the show. He strikes me as a decent man, vocally liberal, with well-behaved kids and a long-term girlfriend. (He thanked her in his speech, more than once.) In real life we are not so different, except that he is a global superstar beloved by millions and I am a putz whose own dog won’t listen to him sob.

I exaggerate, of course. I’m grateful to producers Jessika Borsiczky and Matthew Carnahan for rescuing my memoir from oblivion and giving it a second life. I’ve been on the set. I have touched Kristen Bell. Despite what you’ve heard, show business is better than real life. Fortunately, I am still not in show business.

And I’d rather be me than Marty Kaan. I’m the only guy in the world who can watch Showtime Sunday nights at 10 p.m. and see what I might have become.