Drifting down Route 101 between L.A. and Santa Barbara is the Ventura Highway of song and story, and it fetches up at Ventura’s El Camino Real – a 19th century missionary path transformed by oil in the 1920s into a picturesque redoubt of surfers, old money, hipsters and Patagonia employees.

It feels as far from ad tech as MacArthur Park is from Madison Square, and yet it is the home of The Trade Desk, one of the few – some might say, just two – public programmatic advertising companies that is thriving. Then again, its co-founder and CEO, Jeff Green, is a self-described “contrarian” who spent a half hour last March in a ballroom of the Westin St. Francis in downtown San Francisco telling a few thousand pensive Millennials exactly “Why the Future of Digital Advertising Is Brighter Than Ever Before.” 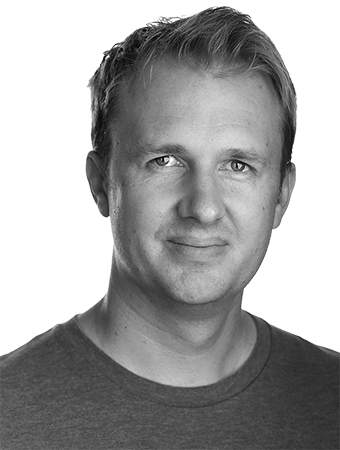 Even Green’s rivals like him. And he adds a West Coast dimension to our ongoing saga of the origins of ad tech … one that starts, in Green’s case, in the early ‘00s when he’s a new media buyer at a small agency in L.A. called 411 Interactive. It’s just after the era of singing socks and Webvan and Qualcomm … when the Super Bowl had sixteen $2 million 30-second spots for dot-com doodads that disappeared … and the Nasdaq free-falls 78% in 30 months.

Advertising wasn’t the only industry that hurt – but it did hurt. And it was at this point that Green decided to start a company called AdECN.

WHERE DID THE IDEA FOR AdECN COME FROM?

As a media buyer, I learned that the number of ways to get screwed in media was literally infinite. I got into fights with sites like Yahoo – you know, what had worked yesterday, stopped working today. That’s because yesterday you got half the front page and half Yahoo mail and today it’s 90% mail. You couldn’t control this.

And part of the way I was coping with the crappy world of ad buying [in 2003] was day trading stocks. I actually got more focused on the internet after the dot bomb. And I was seeing price discovery, liquidity, transactions in the financial markets – and I’m thinking, ‘Why can’t the ad world do this as well?’

I thought the only way to solve this [media buying] problem is to create an auction for every impression. I’m in my 20s at the time, and I’m dumb enough to think this could work. In fact that was the first tag line of AdECN:

“An Auction for Every Impression.”

I am a contrarian. While everyone else is running out of the building, I’m running back in.

SO YOU HAD AN IDEA TO CREATE A MARKET FOR ADS. HOW DID YOU START TO BUILD IT?

I heard there was a company that had been publicly traded – it was called Expertelligence – based in Santa Barbara, and it had tried to do an [advertising] auction. The company had gone bankrupt, but [AdECN co-founder] Bill Urschel had bought their tech from them. He was the finance guy in charge of the cap table. I was the ad guy who had the vision. What he had bought was really just the back of a napkin, but we started AdECN with it.

Meanwhile, at precisely this moment in Manhattan’s desolate Silicon Alley, a cadre of similar dreamers were creating Right Media. Like AdECN, it’s an attempt to improve the efficiency of digital media buying.

WERE YOU AWARE OF RIGHT MEDIA WHEN YOU STARTED AdECN?

No, I didn’t know about them at the time. I think we were ahead of them. I remember debating this one time with [AppNexus CEO and early Right Media-ite] Brian O’Kelley. We were in a conference room in Seattle reviewing an AppNexus deck, and it said that Right Media was the first ad exchange. I said he had to take that out. We started looking up the dates. We came to the conclusion that [AdECN] had started talking about an exchange first but that Right Media had the first patent.

Later on, we [would describe] Right Media as a ‘network of networks.’ Basically, they benefited from multiple hops. We wanted to create a pool of liquidity that everyone could plug into – every ad network in the world – and not just fragmented pools. We were copying the financial networks like Island and Archipelago. That’s how we got the name ECN [Electronic Communications Networks] – from the financial markets.

WAS IT DIFFICULT TO GET PEOPLE TO START USING YOUR EXCHANGE?

That’s the challenge of starting any kind of marketplace: you need a lot of people participating in it or it has no value. I mean, until people join it, we have nothing. Around this time, there was an incident in the U.K. where Universal Music found their ads on a file-sharing site – they were advertising on a site that was trying to kill them. So brand safety became a huge deal.

I saw this as an opportunity for us to pitch ourselves as a central clearing house with no chain of buyers. So I started in the U.K. – it’s not as big as the U.S. but it has the advantage that all thirteen big ad networks were within two miles of one another in London. I spent a year asking them, ‘What are you going to do about transparency?’ In the end, out of the thirteen top networks I got maybe the bottom eight to participate. That started our momentum.

And in 2007, Microsoft calls. In this era, Microsoft is waging an expensive campaign to compete with Google. They both vied for DoubleClick in a hot war that went to Google, which promptly built an ad exchange of its own (AdX). Meanwhile, Yahoo acquires Right Media (as loyal readers know). This continuity leaves Redmond with some holes in its ad stack that it fills by making the biggest acquisition in its history, buying aQuantive for more than $6 billion.

Almost lost in the hoohaw was another acquisition announced the same day: AdECN for a reported $70 million.

WHAT WAS MICROSOFT TRYING TO DO WITH THOSE TWO ACQUISITIONS?

Both were a kind of rapid response to the DoubleClick deal that they lost. The trouble was, Microsoft acquired two different strategies on the same day – and they were at odds with one another. … Everyone wanted to see Microsoft do well. The AdECN strategy was to get Yahoo and AOL to join up and create a pool of liquidity that rivaled Google. But aQuantive was saying, you know, our ad server [Atlas] is better. Let’s combine it with Microsoft tech and build the world’s biggest ad network.

We spent the first year fighting internally. I said let us stay independent – don’t matrix-ize us – and I spent a year working hard against aQuantive, trying to force transparency. … We ended up in political horse trading, and I was put under the people that ran aQuantive. There were five of us trying to figure out the strategy for OSD [Online Services Division].

Microsoft’s OSD had a raft of febrile elements including media (MSN), email (Live), gaming, mobile, behavioral targeting and search. The latter was an area of epic investment, as Microsoft seems to have believed it could out-engineer Google. In 2008, after failing to acquire Yahoo, Microsoft did the next best thing, installing Yahoo’s top search engineer, Qi Lu, atop its ad strategy.

WHY DID YOU END UP LEAVING MICROSOFT?

I made the case to Qi Lu to take the resources that are on Bing and put them on programmatic. We couldn’t beat Google at search. We had one-third as many resources as Google to begin with and two-thirds of them are on Bing. … Also – this is an important point in this story – Google didn’t have a rate card. They didn’t own any [media] properties – this was before YouTube. And after Microsoft bought MSN, they wondered, ‘Do we really want to live in a programmatic world?’ Qi Lu told me he was hired to win the search game. So I said, okay, and I introduced him to Brian O’Kelley.

Which starts Microsoft’s close relationship with AppNexus. It also presages Green’s retreat from Redmond and the end of AdECN, officially closed in 2011, eight years after its founding.

The direction of Green’s ambitions by this time can be read in two dates. He left Microsoft on October 6, 2009. The Trade Desk was founded on October 7th.

Download the third issue of The Chief Marketing Officer quarterly...