Here’s a spill, amigos: In my misspent youth, I was a writer for a program that aired on VH1 in the U.S. and MTV Networks around the world. It was called “Pop-Up Video,” and it made quite the spritz around town in the late 1990’s, before the internet really got its mojo rising.

I appeared on the “Today” Show, my boss was on “Oprah” (twice), and I personally got to write a segment for Kevin Bacon on the VH1 Fashion Awards that flamed out due to technical problems. (At least, that’s what I keep telling my therapist.) It was a glorious moment in time and a very odd show, and it’s my contention that “Pop-Up Video” actually forged the hermeneutics of today’s digital marketing mise en place.

Huh? If you’re wondering what I just said, remind yourself that you’re reading a Gartner blog post, I’m a Gartner analyst with at least one Ivy League parchment on the wall of my seraglio, and . . . wait, what’s this? 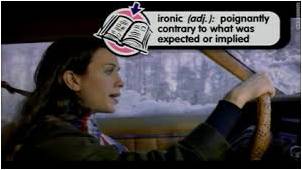 Bloop! Yes, I wrote that “pop.” Or rather, poignantly adapted it from a dictionary to synch with Alanis’ timeless question, “Isn’t It Ironic?” (Answer: Not really. Her examples in the song’s lyrics don’t demonstrate irony so much as a run of bad luck.)

For a while, I was the show’s Head Writer, a title that sounds more ritzy than reality. My “team” consisted of five skeptical hipsters who ignored me, a dried-up cactus, and a production assistant who’s probably still wandering around Times Square wondering what day it is.