They don’t create; they curate. They point you to somebody else’s content, receiving a kind of residual halo sprayed with a mist of benevolence. Hey, it’s honest and allows for a firehose of fascinating information without requiring the bother of research and writing and so on. That’s tip one. You’re welcome.

So the information contained in this blog post is entirely curated. It comes from a link I got from Twitter that led me to a column in a blog called OKDork, which itself was a “guest post” by a guy from an outfit called BuzzSumo. The post was called “Why Content Goes Viral: What Analyzing 100 Million Articles Taught Us.” It contains a lot of awesome information that I am, um, honoring here.

By reading this post you are about five zip codes away from the original source of information. But that’s okay. Why? I’m not sure, but please share this post so it ends up appearing on BuzzSumo’s legitimately groovy dashboard of viral posts.

Using their large database of posts and share data, our friends at BuzzSumo came up with 10 tips to improve virality. The first one is shocking. If you think this blog post is going on too long, you’re wrong. Long is good, at least in terms of virality. Two thousand words is optimal (!), which is almost as long as a New Yorker article. Don’t look at me: this is actual data speaking. I’m just curating.

In fact, the New York Times ran an analysis of their most-emailed articles a few years ago and found that longer articles were emailed more. So there.

Some of the other findings are not quite so surreal. It turns out that adding a picture to a Facebook post or a tweet will increase shares. In fact, Facebook posts with an image were shared twice as often as those without one. Twitter betrayed a similar visual bias. Now, it is against my own personal policy to cheapen my heft as an analyst by stooping so low as to post a cute picture of — hey, somebody jumped onto my keyboard again . . . 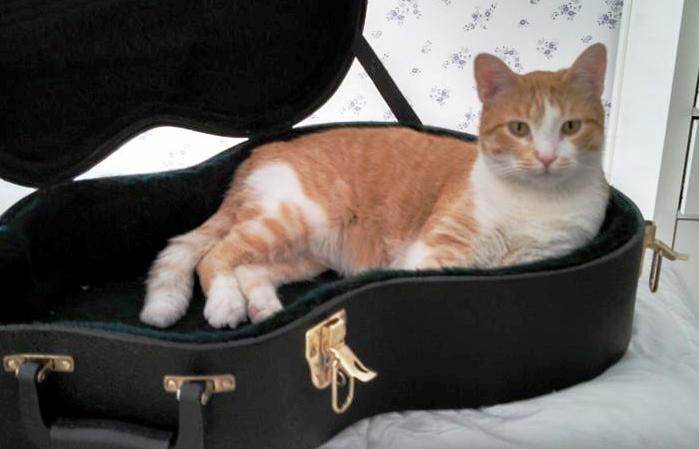 That is Jerry, my cat. As I was saying, optimizing a blog post for virality is not as simple as adding a feline or two no matter how adorable and soulful-eyed and musical they may be. Oh, no.

It is also very important to do which of the following?

The answer, of course, is (5). According to our source, eight out of 10 of the most shared articles in the past eight months were quizzes. Seven of these were from Buzzfeed, which makes me wonder if it’s the format or the forum, but no matter. Quizzes are #winning.

In addition to quizzes, people love to share the following:

It’s also important to get a famous person to share your content. I am not kidding — this is true. If, say, @KimKardashian or @jimmykimmel or even @LilKim choose to share your blog post on, say, “10 Ways to Optimize a Blog Post,” then you’re only one agent’s phone call away from a movie deal. Just ask Boo the Dog, whose insane global superstardom was launched by a single tweet from the aforementioned @KimKardashian.

It sometimes works to call out key influencers by Twitter handle in your post, so you show up in their feed. @GuyKawasaki @TedRubin @justinbieber — I really love you guys!

One sobering data point that emerged from the analysis was that after three days, your post is basically dead, over, gonzo. On Twitter it’s more like three hours. So it is social-optimal to repost the same content over and over (four times per day is one recommendation), to maximize exposure. Expect to see this blog post again. And again. (This time, I am kidding.)

The best day to publish is Tuesday — but Thursday is a very close second. Today is Thursday. I will see you next Tuesday. Please share this informative post by clicking on one of the helpful links below. Especially if you are a celebrity. Happy blogging!