When everyone has a megaphone they all shout louder. Today’s social media cacophony creates all sorts of unwanted side effects. One of those is the tendency to pick exaggerated and more vivid language for everything, even when it is not really warranted. Recent headline use of the term ‘crypto winter’ is a case in point. It is echoing an earlier tech history term: ‘AI winter’. That was a long period of low investment and belief in Artificial Intelligence. How long?  About TWENTY years!  Truly it was a long and bleak time when AI was off the radar for the tech folks in most corporations and confined to academia and research labs. We can see evidence of that episode though the lens of the wonderful Google NGRAM viewer, that shows frequency of mentions of a term in all published books. 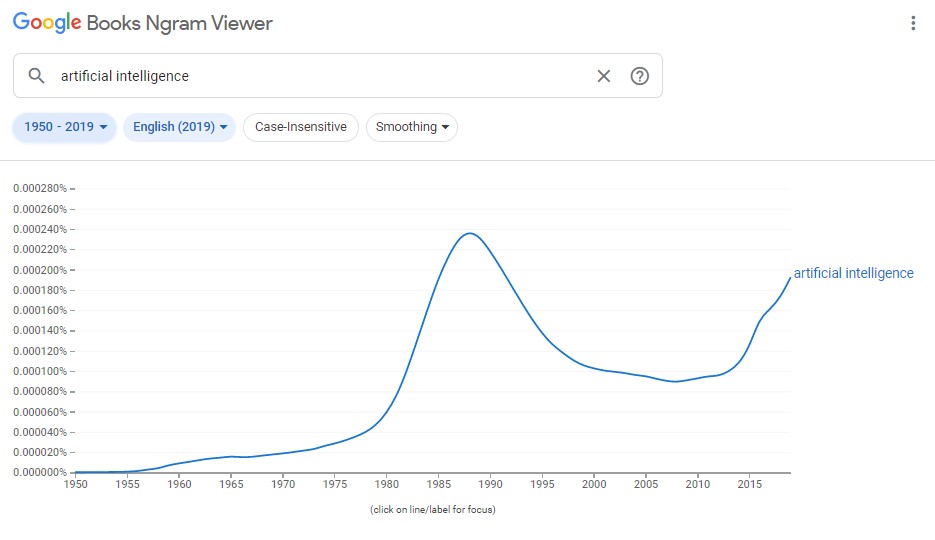 As you can see, from about 1995 to 2015 there was a big reduction in conversation about AI. That was a real winter. You have probably also noticed that the shape of the curve follows a classic hype cycle.  At Gartner we would usually call that ‘winter’ a long trough of disillusionment.

Now let’s turn our minds back to cryptocurrency. How long do you think think the novel blockchain technological attempts at reinventing money / financial assets will be suppressed, by the current loss of faith and excitement?  I can imagine three years, five years, maybe even ten. But not twenty. That’s why I think the term “crypto winter” is evoking  a tech history period far more severe than we are really likely to see. But it is already a commonly used term in  business news media, for example here and here. It’s a bit like calling a recession a depression, or calling a downturn a crash. That much negative exaggeration might grab an eyeball or two, but it doesn’t really help anyone.

Cryptocurrencies are entering the hype cycle trough of disillusionment. It might be longer than hoped. It won’t be multi-decade. The trough of the hype cycle is where the serious issues get ironed out and the long-term sustainable value of an innovation is eventually realised. It is where the tenacious, serious players gradually win by stealth, while the others switch their short lived attention spans to the next shiny toy such as.. oh I don’t know.. metaverse maybe?