Over the years, since the end of the financial crisis – like many others I have been watching and analyzing the digital awakening of the conventional corporate world.  First they pondered the Kodak case, then they started to move. Gradually – and sometimes frustratingly slowly and clumsily, they started to act. Leaders amongst leaders in the fortune 500 – Like Jeff Immelt at GE, Maurice Levy at Publicis and Francisco González Rodríguez at BBVA started to speak openly about the risk and opportunity of digital disruption. Then they made digital a part of business strategy. Now they are going Digital to the Core. These and other companies like Ford, Volvo, Babolat and Quicken loans – all featured in our book of that name – are determined to make digital business work for them. Even though they must import strange new technology competencies and Silicon-valley-esque management belief sets – they have realized what is at stake and they are determined to succeed.

(Image CC BY 2.0 Anders Sandberg) [Listen above or continue reading below – the same content]

I see another set of companies following very closely behind. But there’s a large pack at the rear – still thinking and talking. They do limited experiments but they don’t really commit. If they leave it too late they will never catch up because digital is exponential and its almost impossible for a linear thinking management system to catch up with exponential disruptors.

The ‘born digital’ companies often start with advantages. They have a green field with no legacy systems, trading relationships, products or management thought. They have investors who will forgo short term profits for higher long term capital growth. They capture the emerging talent and apply the new digital tools. One of their biggest advantages is the complacency of traditional industry giants. But eventually those giants do wake up. They copy, they embrace and sometimes extend. In my last blog post I suggested they might even be able to leapfrog. Every industry will be digitally remastered… eventually, but there is no reason to suppose only the likes of Google, Amazon, Facebook, Tesla, Baidu, Alibaba and Tencent will rule in all domains. A good number of big traditional firms will eventually adapt and become digital in their cores too.

At some point in the future, the advantage of being a born digital company, founded after 1995, will deplete. Talented staff move from born digital companies to more traditional ones  – taking their knowledge, insights and methods with them. Many other companies will apply the same ideas, the same technology competencies, the same cultural concepts and ‘new rules’ and they will do so equally well.  We know this kind of pattern is possible because companies like Microsoft and Cisco have made a long term strategic practice out of spotting disruptions, copying or absorbing initial leaders and avoiding being caught out with yesterday’s thinking.

The eventual point of equivalence between the born digital companies and the converted traditional companies will be some kind of business ‘techquilibrium’. The new players will become as big and complex as the old ones. The remaining old players will have absorbed and copied the new capabilities. This is an inevitability. No kind of business strategic advantage can be sustained indefinitely. Of course, between now and that time many traditional larger corporations who woke up and acted too late, will suffer and some will wither away entirely. They will be attacked from both sides – the born digitals and the digital converts will move into adjacencies as they blur the boundaries between old industry categories. They will carve up the highest value economic spaces between them into whatever is the natural minimum number of dominant platforms needed to operate the future economy.

I  dislike blog titles that end in a question mark – don’t you? We all do it, but it seems like cop out – raising an issue without taking a position or suggesting a point without owning it.  This post started with a question. My best guess at the answer is about 10 years from now. This game is truly strategic. It can’t play out quickly but it won’t take too long either. Does 10 years seem like a long time off to you as you struggle to cope with next quarter and next year?  Remember nearly a decade has passed since the financial crisis. Ten years ticks by faster than you imagine it will. If your board and executive committee are still dithering about taking Digital to the Core – then your company might already be falling dangerously behind, on the inexorable march towards techquilibrium.

We explain how to navigate and how to stay oriented during this huge strategic change in our book. Digital to the Core is available in print, e-book and audio book formats from Amazon or your favorite local book store. 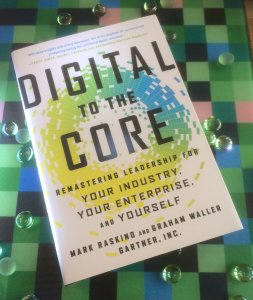 Dear CEO, does your B2B website need a “how to buy from us” page?