From time to time CEOs do create new C level roles and titles. Trends break out and copying happens. Some of this is very real and important – but some of it is entirely imagined. In today’s online ‘news’ world, it is perfectly possible for any bright spark to coin a new C-level job title idea speculatively and blog it.  Before you know it, that idea gets repeated and for a while people think the job might be real even if nobody has ever actually held that title.

This week I was struck by two stories, one about a short report on new c-leader titles from the executive search company Spencer Stuart, the other  a minor news report mentioning the idea of a chief IoT officer. The value difference between these, was starkly contrasting.

The Spencer Stuart report is sharp and insightful. It points out that from time to time, new C-leader titles do become necessary.  This makes sense. There were almost no CMOs in the 1950s and no CIOs in the 1970s – these jobs were invented at some point in time; management is an evolving discipline. So we could reasonably believe there might be a few more to come. But as Spencer Stuart point out – there has to be a practical limit to the number of direct reports a CEO can have. They say it has risen over the last couple of decades. All managers know that once they get past about 15, things become unwieldy – particularly if  you need the group to make coherent and disciplined committee decisions. Spencer Stuart point out that some C-leader titles exist for a while, during a period where a big new kind of issue needs to be dealt with. Recent decade examples of this episodic need might be a major regulation or environmental sustainability. Sometimes, new persistent C-leader roles emerge, but they are niche and only a minority of companies adopt them. Chief Customer Officer is an example.

1) Enduring – a role that is needed, as a source of continuing governance in the majority of businesses and will persist for many years or decades.

We place Chief Data Officer in that category, though it will be a long time before the majority of companies has one (currently < 20%).

2) Transitional – a role that is needed in many businesses as a strategic transformation agent, to introduce a new capability, but will disappear within a decade.

We see Chief Digital Officer as mostly in this category, like heads of e-business circa 1998-2003.  However, some might stick.

3) Niche – a persistent or repeating role that is needed, but only by a minority of companies at any one time.

4) Unicorn – a mythical role that either never existed, or fewer than 10 people ever managed to get it on their business card as a full time job.

I place Chief IoT Officer in this category, at least for now. As I’ve said before, the internet of things is an internet of products – so I believe that responsibility will fall substantially into  product management and other existing areas – it is not a distinct need. But if you want a more evidence-based view why not to believe in the IoT Officer yet – here is it: 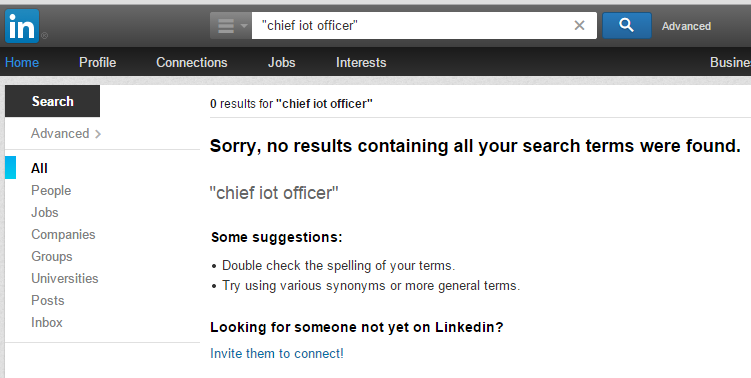 Even Chief Fun Officer is more ‘real’ than IoT officer.