You are sitting in a meeting.  The discussion is going nowhere particularly fast. People are stating and restating their positions.  It looks like things are either headed for a deadlock to be taken ‘offline’ or people are waiting for the largest title in the room to decide or to act.  This is the realm of centricity, where one view of the world takes over and preordains the response.

Savvy leaders recognize centricity.  They treat it as a form of context and context can be controlled.  Either by directly setting the context, ‘we are a customer centric company’, or by bringing centricity into a conversation, ‘from a product centric perspective’.

Using centricity requires understanding how it works and the relationships between the different types of centricities.  Prior posts highlighted the four general types: Custoemr, Internal, Competition and Product.

Centricity is Situational and Changing

Centricity is not maturity.  It is a mistake to see them as different stages a company goes through.  Rather they are situational, with a particular centricity dominating in each circumstance.  The figure below illustrates the idea of the balance between these centricities. 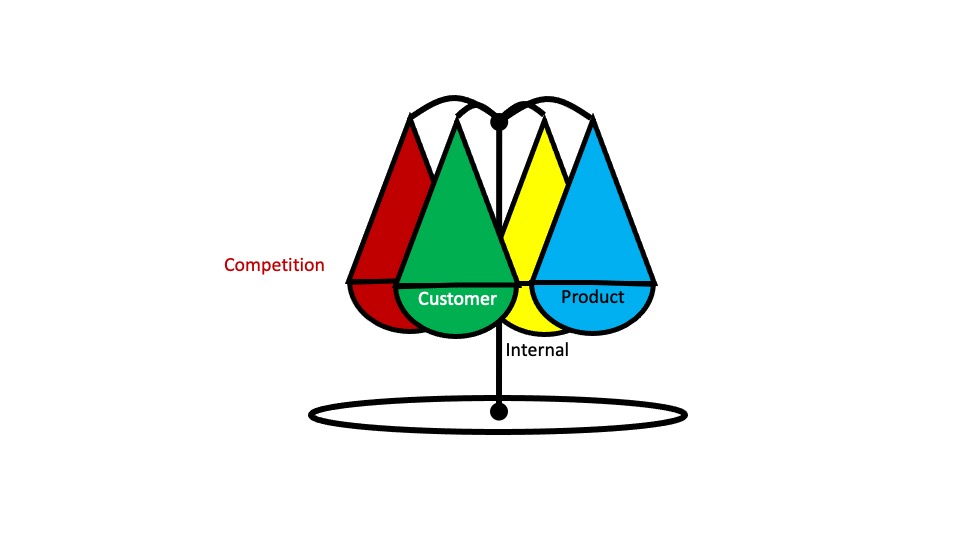 When things are ‘balanced’ the company makes decisions and takes actions that work in the broad interests of customers, the company, the product and improve competitive decisions. These are the ‘no brainer’ decisions where directions and actions do not require trading off against each other.

It is easy to think of every decision or action requiring a tradeoff. If you look for tradeoffs you will find them, but a surprising number of decisions or actions do not require them. Adopting a centricity point of view means you are trying to shape the context, the decision, or the action. This implies tradeoffs that shape the debate and decision.

Adding weight to one centricity changes its relationship to the others

The four general centricities exist in relationship to each other.  Heavily weight a decision in one direction and you lighten the relevance and importance of the others.  The figure below provides a simple illustration.  The example shows heavier weighting on customer and competition issues with a relatively lighter emphasis on internal and product considerations. 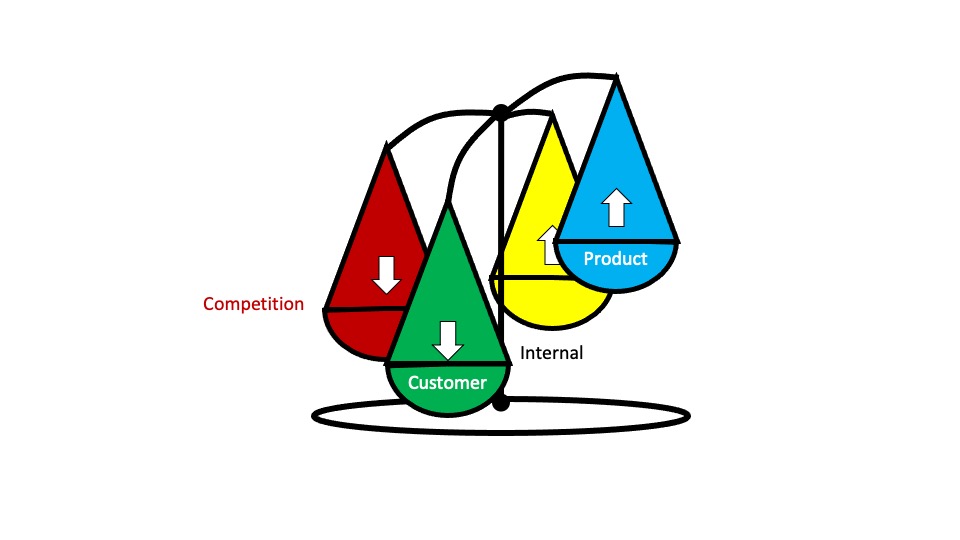 The figure above shows the centricities in relationship to each other and the observation that they can move independent of each other. Switching centricity occurs when participants in a decision choose to frame the decision or action in a particular context.

An example of centricity in decision making

Framing turns a potential ‘no brainer’ decision or action into a debate shaped less by the merits and facts and more by interpretations of context. Product or Brand centricity provides the clearest example. Consider a meeting regarding granting a customer an exception to standard policy.  In this example, let’s make the exception related to mentioning the provider as part of a promotional campaign. The exception involves meeting a customer’s request to use your band in their announcement. A customer centric company would welcome the opportunity.  Internally there is little.  Competitively, the release would be a net positive. Frame the decision in any of these three centricities: customer, internal or competitive and the decision is easy.

Frame the decision from a product and brand perspective and the conversation takes goes in a different direction. Brand policy , which is part of product centricity, views the company as independent and association with any company would, in theory, diminish the brand. What is a relatively simple and presumed positive action is now anathema to the brand.

Leaders know the importance of managing context.  Below is a table to for recognizing and shifting centricity in conversations.  Apologies for the small text in the table.  The shaded cells provide a description of the centricity, with the other cells showing how to shift context. 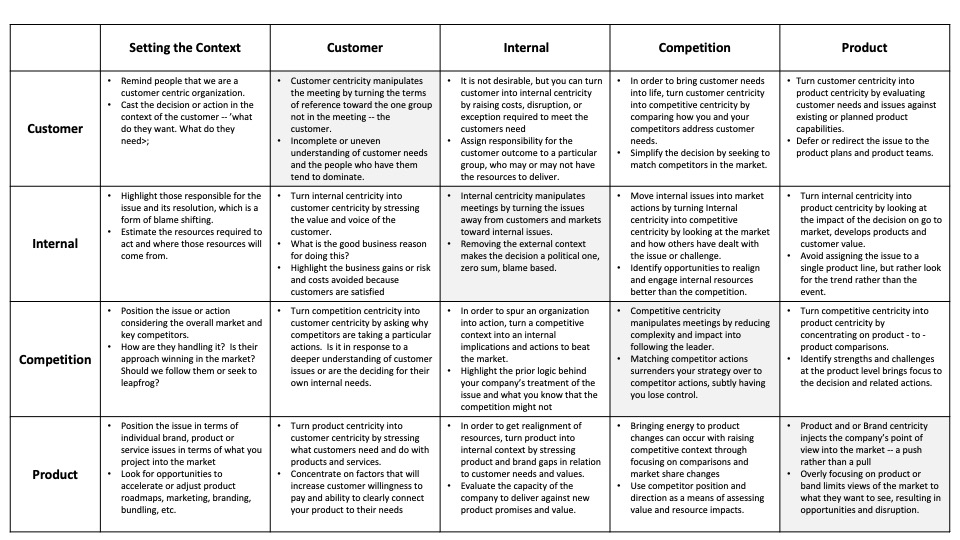 Centricity – a belief that anchors your company and its potential

How do you know where the organization’s center is?

You Tube Video: Michael Schrage on Winning with Customers: Who do you want your customers to become?

The Rumor and the News, making sense of Turbulent Times

Product centricity, what you offer says everything about you

Competitive Centricity, the world of us and them